We are living in a powder keg surrounded by sparks 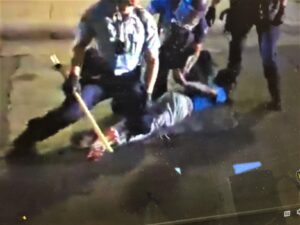 We just went through a second stint of authoritarian lockdown in the form of curfews declared and the National Guard occupying our streets. Many will say that misinformation was at fault here. A Black suspect was said to have been shot by police. Riots broke out. The rage, so ever-present, just under the surface, boiled over—the rage that has built up with every video of a Black person shot and killed by law enforcement, every video of a Black person suffocated to death by law enforcement, every story of a Black person shot by a white person because they knocked on a door for help, wore a hoodie, or ran past a construction site, every white supremacist who kills Black people and then gets taken to Burger King, or points guns at peaceful protestors and is invited to speak on behalf of the president of the United States, or kills two people and strolls past police with an illegal weapon and is able to cross state lines before being outed on social media.
The man had not been shot by the police. He had committed suicide.
In the aftermath of the damage, many have focused their anger on those who rioted. The events and behaviors of the people involved have been thoroughly castigated, even by those who support the protests overall. This is reasonable. No one should be above the law, whether they are righteously traumatized and angry or are police officers. But if we truly want to solve the problems we face as a city and as a nation we must look to the underlying root cause. Only by getting to the root of an issue can we effect sustainable change.
In this moment the root of the problem is lack of trust. A large portion of the population, of all races and backgrounds, does not

trust the Minneapolis Police Department (MPD). Moreover, many of these same people have no faith in the interest and/or ability of politicians to pursue true systemic reform. The political leadership in Minneapolis has done virtually nothing in the months since the murder of George Floyd. The city did attempt some concrete actions, however. They pushed for quick approval of funding for the rental of a temporary 3rd Precinct location. An open letter to the City Council from the Seward Neighborhood Group sums up the neighbors’ reaction: “The process of proposing and voting on the temporary 3rd Precinct site is concerning because of the lack of meaningful community input and engagement and because the Minneapolis Police Department has not made meaningful changes that ensure the safety of our neighbors of color.” (https://sng.org/2020/08/27/sng-letter-to-minneapolis-city-council-regarding-proposed-3rd-precinct-location/) The City Council tabled the motion, sending it back to two committees. It is set to be reconsidered Sept. 18.
The MPD has lost the trust of a large and heterogeneous portion of our population. This lack of trust is destabilizing at best. A civilized society needs to have a way to enforce the law, whether that be against a robber on the street or a murderer in blue. The lack of the latter is what has led us to the instability we have now.
The lack of action by city leadership has left us in limbo. No serious attempts at reform or abolition have been made. Approval of funding for the temporary 3rd Precinct and the visceral reaction of the neighbors should be seen as an opportunity to have a dialogue with the MPD about how badly they have failed us and how they can make it right, whether by a token gesture such as the resignation of Bob Kroll as head of the police union, or more meaningful changes like the formation of a Citizens Review Board with Teeth. More excellent suggestions can be found at the website for Communities United Against Police Brutality (https://d3n8a8pro7vhmx.cloudfront.net/cuapb/pages/270/attachments/original/1597438886/CUAPB_Solutions_for_Minneapolis_2020.pdf?1597438886). I would encourage you to read through these suggestions and communicate the immediate need for them to the City Council. These are things that we can accomplish while the options to defund are being explored. The MPD’s reaction to these proposals can signal whether they can be reformed or need to be abolished.
Until and unless we have action from our city leadership that is truly rooted in justice and equity, it’s only a matter of time before another incident, another video, surfaces. The actions of the police and the lack of action on the part of city leadership put us all in grave danger.