‘The Power Hour’ on KFAI 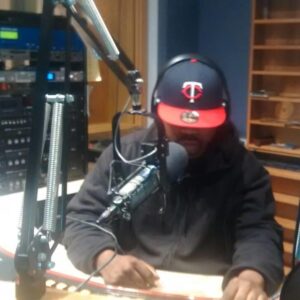 From KFAI studios in Minneapolis, Ethan “Mr. Music” Horace produces his independent music show “The Power Hour” 2.0 on Minnesota Twin Cities Radio. Recently, iHeartRadio syndicated the program, significantly increasing its listenership around the country.
Currently, the show features musicians from around the world, but Mr. Music is insistent on showcasing more independent Minnesota musicians, specifically people of color and folks identifying as LGBTQ.
With the help of new co-host Dante “DJ Enferno” Coleman, Mr. Music puts in every effort for the program to sound professional and fun. “For about every 15 minutes of music, that’s about one hour I put into making the show sound fluid,” he said.
“I love the show because it’s so diverse,” says Breann, a devoted listener of the program. “I love the fact that all the artists are independent. It’s a beautiful platform for unknown artists.”
Mr. Music has been recognized for his work in journalism and marketing. In 2019, a previous version of “The Power Hour” was awarded Best Podcast on Suicide Prevention by the Suicide Awareness Voices of Education. When asked about the podcast, Mr. Music wanted to offer community discussion about suicide, specifically among Black people. “Growing up, it was a stigma that Blacks didn’t commit suicide and it was something we never talked about. I wanted to do my best to change the narrative.”
Currently, Mr. Music’s focus is broadcasting indie music. “The Power Hour” primarily features hip-hop and pop artists, but Mr. Music dedicates a portion of his show to country, rock and jazz musicians. “Right now, my goal is to feature 60 percent of content from Minnesota artists,” says Mr. Music.
MNTC Radio streams on iHeartRadio, and new shows are released every Friday. Listeners can access the show by visiting iHeartRadio.com and searching “Power Hour on MNTC Radio.”
If you want to add your music to the show’s rotation, submit your work to Submissions@mntcradio.com.