A bridge to somewhere 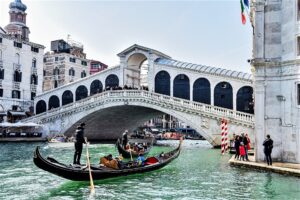 The Rialto Bridge in Venice is probably the most famous pedestrian bridge. Built originally in 1173 as a pontoon bridge, the present stone bridge, a single span designed by Antonio da Ponte, was completed in 1591. Two inclined ramps lead up to a central portico. On either side of the portico, the covered ramps carry rows of shops.

A pedestrian bridge over I-94 just east of 22nd Avenue in the Seward neighborhood is slated to be replaced. The new bridge will line up with 22nd Avenue. A discussion was sparked on the Seward e-Democracy online forum about the future bridge design. The initial poster proposed an artistic bridge based on the work of Siah Armajani. This discussion has included interesting insights into the interaction of the arts and practical public works projects. Someone even brought up my personal preferred bridge option, which would be a land bridge. Land bridges are areas that are built over sunken features, most commonly highways, repairing some of the damage done by these features cutting through cities. One of the advantages a land bridge option offers is that it could be built at grade, meaning it would be handicapped accessible without elaborate ramps.
I consider the “at grade” nature of such a bridge to be one of its major benefits, but it is also one of its biggest hurdles. Pedestrian bridges are required to be a minimum of 17.5 feet from the surface of the road below http://onlinemanuals.txdot.gov/txdotmanuals/rdw/rdw.pdf. In the case of this particular bridge, that would require digging down to lower the surface of I-94. While physically possible it adds cost and complexity to the project. Given that a land bridge is already going to be more expensive than a traditional pedestrian bridge, this increases the resistance from MnDOT. But land bridges are still investments worthy of serious consideration.
Anyone who lives or has spent significant time in Seward is aware that a form of segregation exists here. South of Franklin Avenue is a mix of single and multi-family homes with a few small 2.5- to 3-story apartment buildings. There is some scattered site affordable housing in this mix, but most is market rate and has long been gentrifying. North of Franklin Avenue is dominated by large apartment buildings, some as tall as 20 stories. These buildings are largely a mix of subsidized affordable housing and naturally occurring affordable housing (NOAH). This area is hemmed in by the noise, grime and velocity of I-94 on one side and Franklin Avenue on the other. It is this northern, lower-income portion of Seward that would see the greatest gains from the construction of a land bridge over I-94. A land bridge would offer the opportunity for a peaceful stroll, easy access to green space, and greater connection for this part of the neighborhood.
A land bridge would also offer the opportunity to introduce environmental improvements such as rain gardens and small tree plantings. These would serve as both rain water remediation measures and as a way to improve air quality for the immediate residents. A land bridge can accommodate a full bike lane, full pedestrian lane, and plantings. A standard bridge just cannot compete. Not even an artistic one.
A land bridge offers the opportunity to foster artistic design as well. On a land bridge, multiple smaller works of art can be incorporated—everything from statues to interactive art installations to images and designs on the surface. This could be an opportunity to work with local organizations such as Springboard for the Arts to help with engaging a diverse group of local artists, perhaps even in the immediate neighborhood. Such an organization may also have resources for seeking funding through grants or foundations, which could perhaps make up for some of the added expense of a land bridge. Another funding option to explore would be watershed and environmental resources.
Land bridges should be seriously considered in every location that they are remotely viable. They offer an excellent opportunity to create positive, livable environments that will disproportionately benefit those that have suffered most in urban design of the twentieth century. Minneapolis 2040 actually includes “Freeway Remediation” https://minneapolis2040.com/policies/freeway-remediation/ in the form of Policy 48. Unfortunately, as seems to be the case with any aspect of Minneapolis 2040 I agree with, this policy merely states the city’s support of such activities with no specified policies or funding to make it happen. MnDOT is currently in phase 2 of “Rethinking I-94” and it looks like the plans will be solidified in 2022, http://www.dot.state.mn.us/I-94minneapolis-stpaul/index.html. This could be the opportunity of a lifetime to incorporate livability, equity and the environment into large swaths of the city. Or we can settle for business as usual.