The city has tried and failed to reopen the intersection at 38th Street and Chicago Avenue off and on since it was closed down by protestors after George Floyd was killed in May. These efforts have been unsuccessful and I, for one, am grateful to those protecting this sacred site.
The protestors have made it clear that they will maintain the closure until the verdict is delivered in the cases against the four officers depicted in the video. This is completely reasonable when one considers the travesty of justice that was the verdict against the officer involved in the shooting of Philando Castile, a rare case out of countless other instances of police misconduct in that it even went to trial. We need the city and state to be aware that eyes remain on this case. One method of doing that is to keep the street closed. 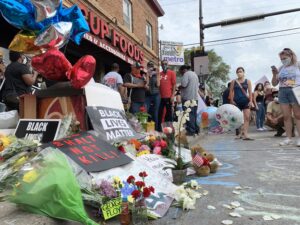 The protestors have accomplished so much out of this tragedy. We have seen a sanctuary movement spring up to support the homeless. We have seen people come together to gather flowers and free face masks for those visiting the site. We have seen community and mutual aid efforts grow out of the protests, and keeping the street closed has been an integral part of that. Recently, the City Council voted to officially add the commemorative name of George Perry Floyd Jr. Place to this section of Chicago Avenue. I doubt this would have happened if protestors had cleared out earlier this summer.
While I commend the protestors’ occupation of the site for the duration of the trial, any discussion of the future of the intersection needs to consider leaving it closed in perpetuity. My husband and I visited the memorial a few weeks after the killing and were struck by how incredibly moving it was. The sacred nature of the space was palpable. People travel here from within the city, the greater metro area, and the country. Hundreds, if not thousands, have already made pilgrimage here, all in the middle of a worldwide pandemic that has largely shut down travel. It already feels like the pedestrian zones found in Europe.
This may seem macabre, but as hinted at before, many tourist attractions in Europe are rooted in martyred saints or tragedy. There is also the important fact that maintaining this memorial pushes back against those who want to minimize or contradict the need for real change in how we police our communities. In the wake of World War II, a deliberate decision was made to preserve Nazi concentration camps and open them to the public. The idea behind this was that it would provide a way for people to bear witness to the horrors perpetrated in the name of white supremacy and xenophobia in the hopes of preventing future tragedies. These are incredibly moving and compelling experiences. Millions of people visit the Auschwitz-Birkenau Memorial and Museum every year http://auschwitz.org/en/visiting/attendance/.
Keeping the street closed also offers a community resource. Again, I look to Europe this time to their pedestrian zones. These often occupy town or city centers and commonly contain a cathedral. These spaces combine somber, sacred functions with joyful, vibrant interactions. Think of the unprecedented opportunity to foster a community space, a space that could include a farmer’s market, performance space, large outdoor seating areas for restaurants, gardens, trees, and public art just to name a few options. The exciting thing is that there is already a community that has a vested interest and is currently building up infrastructure within this zone. A large impact could be achieved with a fairly small investment from the city. Organizers have already formed a variety of amenities on George Floyd Square (as the protesters call it), from art, to community resources, and even a garden!
Those who have built the memorial should be recognized and organized into a council or committee to direct the future of the site. The city should then take its cue from European pedestrian zones and construct parking lots at the periphery, for example in the streets that dead-end at the intersection. When doing this, engineers and designers can build in access for emergency vehicles as necessary for safety. Once that is done, the planning and implementation of the stretch of asphalt should be turned over to the community. The city should provide resources such as designers and engineers, any large construction help needed, but otherwise stay out of the way.
I understand that shutting down the streets and rerouting traffic are difficult for many to fathom. It could cause some inconvenience. But the space that would replace the thoroughfare would be a community asset rarely achieved in our state, let alone our country. We have the opportunity to replace cars and traffic with community, green space, and a true destination. The opportunity to recognize the tragedy and injustice of our society while fostering positive change for the future. We should seriously consider the option.