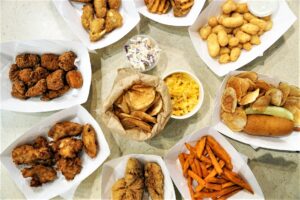 Midtown Global Market’s vendors are having a tough 2020 for the most part. Like most food halls, food courts and dine-in restaurants, the whole market shut down in March. But that was just the beginning.
By the start of April, a few eating and drinking establishments, many of which had not had delivery services before, signed on to one. Additionally, the market worked with vendors—a couple of retail vendors and the food providers who were up for it—to provide a curbside delivery option. This went on right through May, with more and more vendors joining in. On the last week of Ramadan, just before Eid, then Memorial Day and the impending doom that was just around the corner, curbside pickup topped out at 13 vendors. 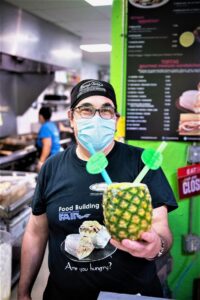 Also, in April, the market’s nonprofit “landlord,” Neighborhood Development Center (NDC), launched Meals for Medics. Supported by grants and a GoFundMe, they paid Market food vendors to prepare meals in bulk and then used volunteers to deliver them.
Then there was a complete shutdown for over a week due to the Justice for George Floyd uprising. The market was saved from
serious arson or looting by a brave band of volunteers who guarded it during the worst of this time around the end of May and the first week of June.
June 1 had been a target for reopening the Market for walk-up ordering of take-out foods and drink, and giving the non-food vendors a chance for some customers. This was delayed for a week or so, but gradually in June the Market opened up. Vendors’ schedules were erratic, and they joined the pivot to live customers cautiously, in twos and threes at a time. Almost all dropped the curbside delivery as soon as they were able to have customers come in to eat or browse, but a lot of the eateries continued doing a lot of their business using delivery services, and of course Taco Cat (which is gone now) was always based on a unique bicycle delivery model of their own.
Another thing the Market was so loved for, besides the eating and shopping, was exciting public events—puppet theater, live concerts, ethnic festivals. All these were off the calendar. Since these were free and used as a means to pull in crowds, there was no reason to try to move them to virtual mode. But various clever workarounds allowed some events to still occur, with social distancing. For instance, on June 10, a free legal clinic for area businesses damaged by rioting was held, with masks and distancing. Then on June 16, NDC, along with state and local agencies, hosted a full-fledged small-business information session for those impacted by civil unrest. 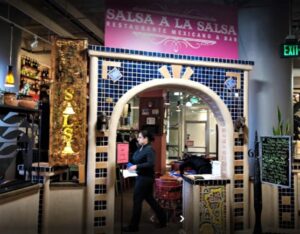 Very soon after the looting and destruction of Lake Street, the NDC started another GoFundMe campaign called Market Mend. This campaign raised nearly $160,000 and was then allotted to the vendors as one-time grants to help rebuild. The Meals for Medics campaign temporarily pivoted to providing meals for anyone in need, and there were grocery giveaway pop-ups off and on from May 30 through June, as vendors gradually began to work toward reopening. By June 22, the Market was able to announce that 21 vendors, including indoor dining at Salsa a La Salsa with reservations, patio dining at the Brewery, several retail vendors and services (you could get your brows done at Leila’s Brow Art while wearing a mask!) and over a dozen takeaway food vendors, were open for business.
An official Grand Reopening was held July 18. The main difference here was that the food court type seating was now opened, with half the tables, and well-spaced out. And that many vendors were back to their usual hours. Volunteers from Backyard Community Health Hub, one of the nonprofit tenants, staffed greeter stations at the doors from the very first openings of the market, enforcing the mask rule, handing out free masks. Originally, they were doing temperature checks, but they dropped this before the grand opening
For one of the big vendors that was gone by the time of reopening, it wasn’t due to COVID-created financial woes, but due to a PR disaster. When racist postings and tweets by a family member of the owner came to light, Holy Land deli remained in 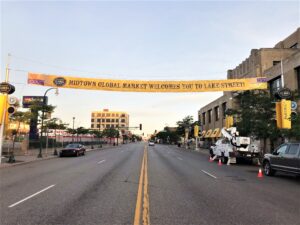 business, but was evicted from Midtown Global Market and their products were dropped by a number of retailers around the Cities. This occurred on July 5, right in the thick of the Justice for George Floyd upheaval.
Since Ziadi’s had already closed before COVID, the Market was down to only one dine-in restaurant—Salsa a La Salsa—unless you count the Eastlake Craft Brewery where you used to be able to drink inside and bring in market food. Now the restrictions mean only two customers at the Brewery’s bar to order at a time, and it looks like people are choosing the more open food court or the patio outside when that’s available. With full table service and a full cocktail menu, Salsa a La Salsa is operating just like before, except with 50% capacity of course, supplemented one supposes by takeout.
Sadly, one business that made it all the way through the Grand Reopening and for the rest of that month, but ultimately decided to close down, was Cafe Finspang, the wonderful purveyor of foods and crafts from Scandinavian countries. Also, Taco Cat announced it is closing down. This was mainly due to competition from burgeoning meal delivery services. But a business that had only opened in late January of 2020 is still going strong to all appearances—Infused Life Plant-based. They offer healthful juices and smoothies, salads and soups, and iced and hot teas, and are a welcome addition.
A completely new spot at the Grand Reopening was the Indigenous Food Lab, a project of Sean Sherman (the Sioux Chef) and Dana Thompson’s nonprofit NATIFS (North American Traditional Indigenous Food Systems). Currently they are only open to volunteers to help them prepare free meals based on indigenous, pre-colonial ingredients, but they soon hope to be offering classes in foraging, Indigenous foodways and cooking with Native American ingredients. Check out this video they made recently: www.facebook.com/AmericanIndianFoods/posts/360226292001142.
The biggest post-COVID event the Market has been able to pull off happened in August and was called the Great Global Get Together. It ran from Aug. 27 to Sept. 6, featuring State Fair-inspired food and outdoor events. Another event was the Rebuild Lake Street Fundraising Concert (collecting tips for the musicians) sponsored by Pham’s Deli.
Currently there is an almost equally big deal event. Nationally known as Hispanic Heritage Month, Minneapolis celebrates Latinx Heritage Month Sept. 15 through Oct. 15, and the Midtown Global Market is a big part of it. Check out the events, businesses and restaurants where you can celebrate and support the Latinx community and enrichment of Minneapolis culture at www.minneapolis.org/calendar/holidays/hispanic-heritage-month/. 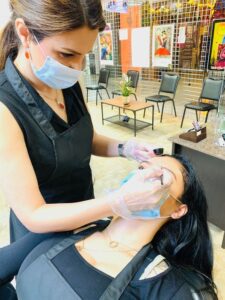