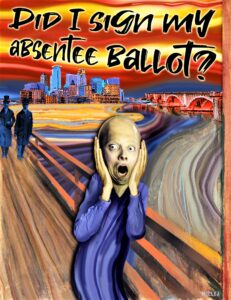 There is absolutely no proof at all that the only “safe” way to vote is in person at a polling place on the day of Nov. 3.
In Minneapolis, as in Minnesota as a whole, our voting system is intact andcarefully monitored. Ballots do not get discarded. Mail in your vote early, check its status online as the state provides, and fix any problem with it way before Nov. 3!
The biggest problem nationally appears to be voters not paying attention to the proper procedure for voting by mail: First you have to fill out the ballot, then put it in the ballot envelope, then SIGN the ballot envelope—sometimes with a required witness—and put it in the mailing envelope. Then you find a post box or a ballot box downtown to place that mail envelope in.
So-called “naked” ballots (those not inside a signed ballot envelope that is inside the mailer) or those that lack a voter’s signature are the most frequent reasons a ballot doesn’t get counted as valid. You can fix a problem with your mail-in ballot, if you vote in time and then check on it. DO THAT.
No ballots get tossed out without reason, except where Republicans rule the process and are determined to suppress the vote totals, even at the last minute after ballots have been cast. As Trump has recently said, all he has to do to win is “get rid of the ballots” and—just this week!—have the Supreme Court decide the winner, “not the ballots.”
Trump’s campaign wants us all to doubt the security of our ballots. Don’t let them do that to us. Not in Minneapolis, at least.

What are those two questions on my ballot, and why can’t I understand them?

Someone said that these are the most poorly written charter amendments ever, but I don’t agree. I have read others. There has been no attempt here to allow a citizen to understand them from the text, and no public explanation from the city. It’s like they were written by the same people that gave us the Charter “cleanup” a few years ago. Oh wait, it was the same people. Our Charter Commission.

QUESTION 1
Redistricting of Wards and Park Districts
Shall the Minneapolis City Charter be amended to allow ward and park district boundaries to be reestablished in a year ending in 1 and to allow the use of those new boundaries for elections in that same year; to allow ward and park district boundaries to be modified after the legislature has been redistricted to establish City precinct boundaries; to provide that an election for a Council Member office required by Minnesota law in a year ending in 2 or 3 after a redistricting shall be for a single 2-year term; and to clarify that a regular election means a regular general election?
What? Basically, the current state law conflicts with our charter when we have to redraw boundaries after a census. The amendment says that we can redraw the ward (and other) boundaries the next year (2021, a year ending in 1, see?) even if the legislature and congressional district battle is not done. Then we can have the City Council elected (along with the mayor) in 2021 with the new boundaries. But only for a two-year term, because the state law will require the City Council to be reelected in 2023 after the rest of the redistricting is done (which might change the ward boundaries again). Now, If we left it alone, that would make the City Council and the mayor out of sync, and require elections every year (we have state elections in even numbered years). Elections are expensive, so we are told, and people don’t like to hold their officials accountable, says the City Council, which doesn’t want to return to two-year terms). To solve this, the 2023 election is also for only two-year terms, so everything is fixed. Yay! Well, only for seven years ’cause we have to do it all over again after the 2030 Census.

CITY QUESTION 2
(Minneapolis)
Special Municipal Elections
Shall the Minneapolis City Charter be amended to comply with Minnesota election law related to uniform dates for special municipal elections and to provide that a special election be held on a legal election day under Minnesota law that is more than 90 days from a vacancy in the office of Mayor or Council Member?
Another conflict between the charter and state law. This came up when Council Member Warsame resigned last winter to take another job with the city.
The charter says we needed a special election in 90 days, but the state law says there are only certain days that it is legal to hold an election. What to do? Change the charter, of course: eliminate the 90-day requirement.
Hope this is clear.
What happens if they don’t pass? I don’t know, but someone will certainly sue because no matter what the city does, it will violate either state law or the charter. So, unless your income is reliant on there being a lot of work for lawyers, vote yes on both.