Dinkytown in the 2020 Weirds 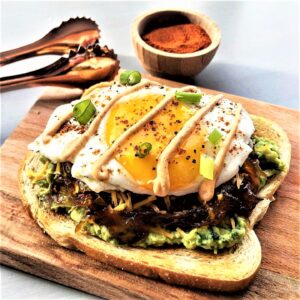 Dinkytown, as you know, is not like other neighborhoods. It’s not even like other college campus-adjacent neighborhoods such as those in St. Paul, or in smaller college towns. So Dinkytown’s response to things like the COVID pandemic is also a little bit different.
Dinkytown, with its huge nearby (or, increasingly, living right there) student population had a lot of spots to eat and drink heading into the pandemic. But the moving of classes to virtual and the “shelter in place” rules of the spring of 2020 kept a lot of that traffic away, so even those restaurants that were already heavily takeout lost business, while those with only dine-in options, as well as all bars, hair salons, tattoo parlors and many retail establishments, were forced to change fast or close completely until at least June.
With the George Floyd uprising, Dinkytown was not a target. Maps and lists show no businesses or buildings in Dinkytown were damaged. Only the Target Express in Dinkytown (about which more later) was lightly damaged in the rioting in the wake of the Nicollet Mall murder-suspect suicide on August 26.
A number of the profile areas we have covered had a tale of a business that had just opened or been through a major change in the months or weeks preceding the pandemic, in that really weird (now, to think about it) time when COVID-19 was here, but not yet named or considered serious. In Dinkytown, that “business” was a library. And even though I was a frequent tourist in Dinkytown, and a well-known library buff, what used to be called the Southeast Branch Library was never on my radar before. But now I see that it’s very interesting. In fact, thereby hangs a tale… 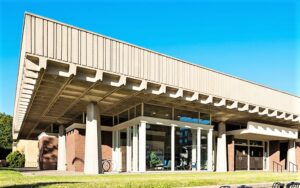 The building in which it lives, which was renovated throughout 2019 and just reopened in January 2020, was designed by modernist architect Ralph Rapson, mostly known in Minneapolis either as the designer of Riverside Plaza Apartments, or as the longtime head of the University of Minnesota’s School of Architecture, or as the father of local lawyer, philanthropist and politico Rip Rapson.
Ralph Rapson didn’t build this structure to be a library. It opened in 1963 as a credit union office, and was converted to a library in 1967. People have described the design of Rapson’s buildings as “brutalist,” but really, they are something different. They grew out of brutalism, but were a transitional style, bringing playful touches and light airy spaces into the canon of that design, softening its brutality. The library in Dinkytown has an example of a signature of Rapson’s aesthetics—an optical illusion where a huge concrete slab of the roof seems to hover weightlessly atop delicate pillars. It’s really rather beautiful.
So, to get back to 2020, the library was substantially remodeled, and reopened under a new name—the Arvonne Fraser Library. Now that’s the really interesting part, because Arvonne Fraser was a mentor to the young Rip Rapson in the 1970s. Rip worked as a congressional aide under her direction when her husband was the 5th District congressman, and then Donald Fraser appointed Rip as his deputy mayor when he left Congress for a successful run for mayor. After having proved his chops at policy by largely writing the BWCA Wilderness Act in Washington, Rapson the younger in Minneapolis was the “architect” of the Neighborhood Revitalization Program. 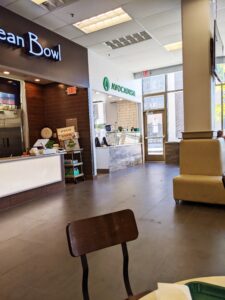 The Arvonne Fraser Library was one of several chosen for early reopening in the COVID pandemic with new rules and restricted hours. The library is open Tuesday from noon to 8 p.m. and Wednesday through Saturday from 9 a.m. to 5 p.m. They have set up outdoor study areas under that illusory slab roof. But who can say what the winter will bring?
Now on to more mundane considerations. With the opening of that Target Express I mentioned, which is located in the Marshall Apartments, grocery shopping returned to Dinkytown. The Target Express is rather Tardis-like: bigger than it looks from the outside. See the corporate website for hours, details and online shopping.
Services seem to me to be less numerous in Dinkytown than they once were. There is a print shop (there used to be several), at least one hair salon, a shoe repair place, a bike shop (an outpost of Erik’s Bike and Board). But a really thriving service there is Dinkytown Optical. They’re a full-service optician, with in-house eye exams, and accepting most insurance coverage. Although closed for a short while for everything but emergency orders and pickup (i.e., no exams), they reopened in early May and are now open pretty much as normal. Their reviews on Facebook and Yelp are good and on Groupon they have a solid 4.9 out of 5. See Facebook page for more information (and cute graphics).
Retail is also underrepresented with the plethora of restaurants in Dinkytown. There is one venerable bookstore there, and although I don’t visit it as often as I would like (I daren’t—the last time I intended to buy nothing and came home with almost $100 worth of treasures. And I’m supposed to be downsizing!), it’s one of my local favorites. This is the Book House, which I covered more in depth a few years back.
The Book House has the most exquisite website. I have a lot of sympathy for business owners these days who have to somehow magic up a “web presence” in addition to whatever their actual skill in business is. But the Book House has done it. They have around 80,000 books in all, cataloged, browsable, buyable, but additionally their website is very attractive and easy to use. If you would prefer to browse in person, they are asking on the website that you make an appointment. But when I visited Dinkytown, there was a big “Open” sign in the Dinkydale Mall and an arrow pointing up the stairs to where their shop is, so I expect they would only turn you away if someone with an appointment was already there.
So, to the restaurants. One that we covered somewhat in depth last year is Wally’s Falafel & Hummus. You can read that here: 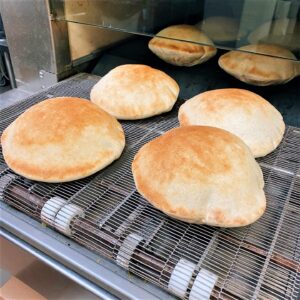 https://southsidepride.com/2019/10/21/dinkytown-still-positively-4th-street/. They never fully closed down, except for a few days in the civil unrest / curfew period. They pivoted to takeout and delivery-only at first, spent a lot of April and May sending free meals to frontline workers, and then took advantage of the uncertainty of the times to partially close (just the in-person ordering option) for a remodeling from mid-July to late August. So now they have a more spacious space for better social distancing. They offer lots of options for ordering—in person, by phone, by website, or you can use DoorDash or Bite Squad. Check their Facebook page for more.
Also, in the same piece linked above, we mention Shuang Cheng, the Chinese local favorite of great longevity. They are still open but for takeout only. It looks like they tried to do social distancing dine-in (because there are rules and regs posted on the door), but I guess they’re just too popular to make it work! Check out their massive menu on their website http://www.shuangchengrestaurant.com/index.php, and either phone or swing by for some yummy takeout.
In the same arcade is another one we covered last year—Land’s End Pasty Company. Their space is tiny, but by only having two or three tables, they do manage to have a limited dine-in option. Pasties were originally invented as traveling food anyway and they do most of their business as takeout or delivery (through GrubHub, but they recommend calling first to check availability). They are also selling batches of frozen pasties, fully cooked, just thaw and warm in the oven. 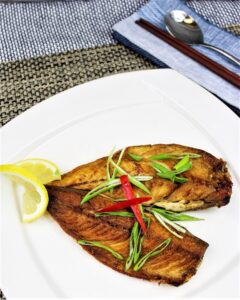 Another place we mentioned in the above article was then not open—Avocadish. They were planning to open in the spring, and actually managed to do so, though in fits and starts. Sydney Hall on 15th Avenue now has a Food Court, and Avocadish was its first tenant to open, followed by Mi Tea and Korean Bowl, and soon to be followed by Hokkaido Poke and Sushi and Magic Noodle, a branch of a popular St. Paul spot. I tried out Avocadish—all of their dishes and smoothies contain avocado—and it’s great and reasonably priced.
A final eating place to consider in Dinkytown is one I covered in The Dish, our last restaurant review column, in fact, my last review. It’s K-Bop, a quirky (for the U.S.) but pretty authentic (apparently) Korean fastish food place in the Chateau Student Housing Co-op. Read our review here, where I highly recommend the Korean savory pancake: southsidepride.com/2018/06/18/the-dish-lunch-around-the-world-korean-feast-in-dinkytown/.