Disarm them with love 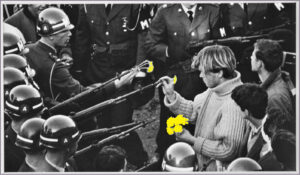 There is nothing more dangerous than a cornered rat. It is desperate. It will do anything to survive.
Donald Trump knows that when he leaves office there is an almost endless trail of criminal charges he will face. He will pardon his fellow felons: Manafort and Flynn after the election, and if he’s smart enough, he will resign at the end of his term and have Pence pardon him for any federal crimes he committed, but that won’t stop the determined New York state’s attorney general from pursuing him for fraud in filing his state income taxes and other charges.
He is resorting to desperate measures. The Republican Party in California is setting up fake remote drop boxes for ballots made to look like official drop boxes to harvest votes and delegitimize absentee voting. Trump urged voters in North Carolina to vote twice: vote by mail, then vote in person at the polls. But the most dangerous gambit Trump is trying will probably be in Powderhorn and the South Minneapolis precincts.
Anthony Caudle, the chairman of Atlas Aegis—a private security firm that uses veterans from Delta Force, Green Berets, Navy SEALs and Army Rangers—told the Washington Post that he was hired by a private client to “guard” Minnesota polls. He is recruiting former military to send a “large contingent” of recruits to Minnesota “to make sure that the antifas don’t try to destroy the election sites.”
Nobody believes that. Attorney General Keith Ellison and Secretary of State Steve Simon said that we are “strongly discouraging this unnecessary interference in Minnesota’s elections, which we have not asked for and do not welcome.”
It seems most likely these armed militia are intending to intimidate voters, especially in the inner city precincts. Trump lost Minnesota in 2016 by 1.5 percent. If he could depress voting in the heavily DFL precincts in the inner city, then his outstate advantage would carry the state.
What are progressive organizations doing to counter this interference?
DSA (Democratic Socialists of America) had an open Zoom meeting with about 130 in attendance on Oct. 11 to kick off their plan to respond to the transition of power, election day and beyond. A member who was in attendance said, “We are organizing in as many neighborhoods as possible, activating our over 1,000 members through personal conversations. The plans that will emerge will vary from one polling place to the next, and we may not have coverage for all of them, but in general, we’re talking about things like handing out water and snacks if there are lines, escorting people to the polls if they request it, and having some people trained in de-escalation we can call on if need be.”
Our Revolution MN’s board met and passed a resolution “in support of all progressive groups in Minnesota organizing to protect our democracy. This includes DSA’s work on poll protection, poll observers and assisting voters. ORMN will be publicly promoting their events on our Facebook page.”
I called the state DFL and asked what plans the Minnesota DFL has to meet the challenge of the probability that the Trump campaign will have armed militia at inner city precinct polling places to intimidate voters on Nov. 3.
They responded, “The Minnesota DFL Party is confident that voting will be safe, secure, and accessible for each and every Minnesota voter, whether they cast a ballot early or on Election Day. To ensure that happens, we have a large, well-trained, and well-resourced voter protection team at the ready. We encourage Minnesotans to call our voter assistance hotline, 833-335-8683, with any questions about voting and we encourage everyone to visit iwillvote.com/mn to get registered and make a plan to vote.”
Maybe it will all work out.
Maybe there will be some peaceful discussions between progressives and Trump’s militia, and everyone will go home happy.
But, maybe not.
Trump has said he will not recognize the election if he does not win.
Maybe he is planning on some crazed militia members (like Kyle Rittenhouse in Kenosha or the Michigan Wolverines who were planning to kidnap Gov. Whitmer) to provoke violence, kill some peaceful protesters in “self-defense,” and use the ensuing protests and violence as an excuse to seize the ballots and declare the election invalid.
Maybe this is his burning of the Reichstag and his excuse to end democracy and “restore order.”
The order he wants to restore is white male privilege. That’s what this election is all about. That’s why Trump has such a hardcore base that he could boast he could stand in the middle of Fifth Avenue and shoot someone and not lose a vote.
His father was arrested and fined in Queens for refusing to remove his hood in a Ku Klux Klan march. When asked about David Duke’s endorsement (the last Grand Wizard of the Klan), Donald Trump said, “I know nothing.” The Know Nothings were nativists and racists in the middle of the 19th century who formed part of the coalition that was the original Republican Party; whenever they were asked if they were part of that racist organization, they answered, “I know nothing.” Trump’s first wife, Ivana, said he kept a copy of Hitler’s speeches by his bedside for late night reading.
Donald Trump has a strong pedigree as a white supremacist and male chauvinist, and it would be a tragic mistake to underestimate the number and strength of his supporters.
On Jan. 20 of this year, Martin Luther King Day, 22,000 white males surrounded the state capitol in Richmond, Va., carrying AR-15s and Trump signs to protest the new laws restricting guns.
Meet them with love and fellowship on Election Day, but if there is violence, retreat immediately. We do not need more martyrs. We need common sense and organization.
But don’t say, “It can’t happen here.”
That title has already been used by another Minnesotan, Sinclair Lewis, in his novel about how fascism came to America.