The battleground that is Lake Street 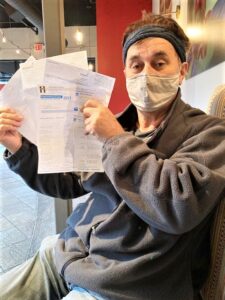 Despite ambitious efforts by the city and a Neighborhood Action Plan to reimagine Lake Street, Ira is not hopeful. After 40 years in the car business in the 4500 block of East Lake Street, he has closed. Before the year was half over, the pandemic and the destruction surrounding the riots in the wake of the killing of George Floyd by the MPD caused Ira to let his guys go and close shop. He has had a “For Lease” sign up for months with no takers. “People are shying away from Lake Street. Small businesses especially are not confident that it is a place to invest.” Ira points out that this is not just about him, it’s about the community of small businesses on or near Lake Street—the varied and needed small businesses that have called East Lake Street home for years, even decades: restaurants, hair and nail salons, coffee shops, laundromats, car sales & repair, small ethnic groceries.
The hangover after closing his business is painful and involves physical and financial damage. His current debt is $10,102.90, itemized below.
Ira shows up to our meeting with documents tucked into his pocket. Before he pulls them out, we chat a bit about the unique and trying summer that Minneapolis has experienced. Ira points out that he is not politically oriented and has a great deal of empathy for George Floyd’s family and The Black Lives Matter movement as well as all marginalized groups including immigrants, a demographic he is part of. He is especially concerned about his fellow merchants suffering the same aftermath that he is. Ira simply wants to continue working and making a living as he has been for decades. We review his documents.
The Documents
– Document #1 is his property tax statement from the city announcing a 52.8% increase (2021 over 2020). Yes, 52.8%! $8,375.18. 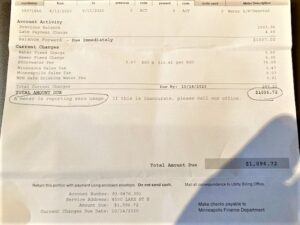 – Document #2 is his utility bill from the city: $1,096.72 (the bill notes “a meter is reporting zero usage”).
– Document #3 is his license renewal: $455.00.
– Document #4 is a fee for inspection: $176.00.
Total $10,102.90
Ira forwards a voicemail to me that he received from the city in response to his inquiry about his 2021 proposed property tax with its unusually high increase. A soft voice explains that his property has been compared to like properties and assessed accordingly. She further assures him that such large increases will not follow 2021, implying that this is a one-time, isolated charge. Discussing this call with Ira he asks, “To what and where is the comparison being made? Is it to like properties on East Lake Street? Minnetonka? West Hollywood? Rodeo Drive? What is the context?” So far, this question has not been answered.
With no business for many months, Ira cannot afford to pay up. He took some reasonable steps to assuage the situation. He had no-longer-needed utilities turned off. He improved his second building (next door) with the intention of working out of it. Miraculously this one had survived the riots. This did not turn out when his Ward 2 City Council member informed him that he could not go in this direction. Ira does not quite understand the reasons, but assumes it has to do with zoning, future zoning, future plans.
So, what are the future plans for East Lake Street? As early as 2000 there was an East Lake Street Corridor Study conducted 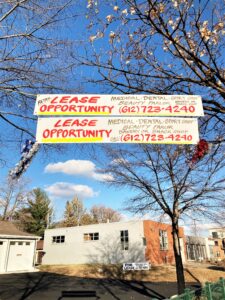 referencing 36th Avenue to the Mississippi River. The Lake Street Task Force published its vision for Lake Street, which included public realm improvements, development of mixed businesses (retail at ground level with living and office space above), a lively pedestrian thoroughfare, attracting quality developers, improving safety and the appearance of the street, strengthening existing desirable businesses, etc. Included in the list of challenges are “numerous parking lots and auto-oriented businesses.” Shall we assume that auto-oriented businesses are undesirable? Ira’s response to this information is, “If the city wants us to go away, why not simply tell us and stop playing games?” But then there is a long history of playing games. After all, this is originally Dakota and Ojibwe land.
Lake Street has a long, prosperous, rich history dating back to 1856. It began as a narrow dirt road with a few homes and businesses such as Harvester Works, Freeman’s Dept. Store, The Oddfellows Hall, Petersons Drug Store, Podany’s Furniture and Hotel Woodland. It was shaped and influenced by Natives and immigrants, African Americans, Yankees from the East Coast and Europeans. They came for cheap land and natural resources. They cut timber to escape slavery, starvation, war and the class systems of their homelands. Lake Street was home to prominent bicycle trails (1880s) and smart carriages and horses. By 1905 the trains came and by 1908 it was paved. Did you know that Lake Street was once known as “Automobile Row”? The first car arrived in 1896, and by the late 1920s Lake Street had become a showcase for automobiles. With its miles of fluorescent lighting, it was often compared to Le Cours Vincennes Boulevard in Paris, Bond Street in London and famous streets of Rio de Janeiro and West Germany. I’ve been told that as recently as the 1960s it was a strip where you could show off your car and rendezvous with friends and strangers.
Like Ira, many Lake Street merchants and local residents do not want gentrification or displacement. They do not want “Uptown.” They want to preserve the character, the multicultural and ethnic nature of the area full of choices and experiences not found in other parts of the city. In the aftermath of George Floyd’s death and the ensuing riots, city officials designated Lake Street as “one of seven cultural districts to promote racial equality, preserve cultural identity and promote economic growth.” Yet, some have been forced to leave as the system grinds through legislation, committees and task forces focused on what to do about Lake Street. Maya Santamaria moved her Spanish language radio station (La Raza Radio, which has been around for 20 years) to Richfield where her agent was able to find appropriate space. Ruhel Islam of Gandhi Mahal Restaurant was fortunate to find temporary space with a neighbor. This way he can continue with takeout food, now known as Curry in a Hurry. Those who are unable or unwilling to continue on Lake Street represent a loss to Minneapolis. Without immediate relief, more may be forced to leave. We hear and read about relief funds: Lake St. Council Recovery Fund, Urban Ventures, The Promise Act, etc. On Nov. 24, Gov. Walz and House Republicans released separate economic relief plans to help small businesses and workers, indicating that it will take 30 days for the legislature to move funds into the hands of businesses. Clearly there are good faith efforts being made as well as donations via not-for-profits, private entities and individuals. The question is: Will the funds make their way into the hands of those in need fast enough to preserve the businesses often built over many years and destroyed within a few hours? And will it be enough? We still see huge piles of rubble all along Lake Street six months after the historic nights of destruction. The cost of removal is often in the six-figure category, not to mention the cost to rebuild. Those with insurance get some relief, but rarely enough.
With rich, historic significance there is no doubt that Lake Street should be preserved. On this, most agree. Yet, questions remain regarding who will stay, who will go and what will be valued? Will we still be able to find the delicioso ice cream at La Michoacana Purepecha? Will there ever be another Roberts Shoes? Can the hardware store where they know my first name remain? Can I walk on foot to buy groceries? Or will we have multiple Starbucks and formulaic shops such as Sephora and Urban Outfitters?
While funds get sorted out and distributed, maybe the city would be wise to at least reduce expenses for small businesses impacted by the unprecedented 2020 trouble, especially those who are currently diminished or inoperable.