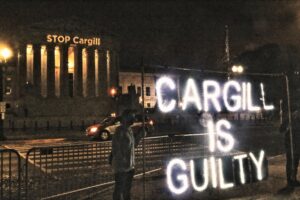 On Monday night, Nov. 30, environmental advocacy organization Mighty Earth helped stage a protest at SCOTUS, the Supreme Court of the United States, in which they managed to get around heavy security in order to project colored lights onto the Supreme Court building that read “CARGILL is Guilty.”

John Doe I is the name for six formerly enslaved children who were trafficked and beaten, deprived of food and forced to work on cacao plantations in Ivory Coast, in West Africa. Their claim is that corporations Cargill (giant agrobusiness headquartered in Minneapolis) and Nestlé (Swiss-based food giant, a major buyer of cacao from Cargill) purchase(d) cacao knowing the conditions and knowing they are/were supporting and perpetuating slavery.

The case has been moving through the U.S. court system since 2005 and now has arrived at the Supreme Court.  A ruling is expected by summer of 2021. The case has the potential to set a precedent on corporate liability.

From the legal analyses I have read, the prediction is that Cargill and Nestlé will win their appeal, but by a narrow margin.

From what I can gather, it’s not that any of the Supreme Court justices or even Cargill or Nestlé or their lawyers think slavery is a good thing. Of course, they don’t. It just seems like the wrong law is being used to address this issue—like it’s a law that doesn’t exactly apply to the case. But what do I know?

Regardless of the outcome, the fact that children are enslaved to produce chocolate consumed around the world has again come into the public consciousness. I’m hoping that makes everybody buy nothing but Fair Trade chocolate from now on—and not the co-opted corporate Fair Trade but rather the real stuff. (Be careful with the term “fair trade” just as you are careful about the “organic” label.)

There are a few ways to vet a chocolate brand’s ethics. One is by looking on a website that shares an ongoing list of ethical chocolate companies, such as Slave Free Chocolate, Fairtrade America and Fair Trade Certified.

If destructive practices by large corporations are not stopped in the courts, we as consumers have to do our part and “vote with our dollars.” Make sure the chocolate you buy is humanely sourced. (Coffee and flowers too.) I wish we didn’t have to work this hard at it.

There was a hopeful moment in 2001, when the Harkin-Engel Protocol was signed—a voluntary public-private agreement to eliminate the worst forms of child labor (defined according to the International Labor Organization’s Convention) in the growth and processing of cocoa in Ivory Coast and Ghana— but it has not been very successful, and is due to expire in 2021.

Sophie Hirsh on the Green Matters website wrote, “Of course, the problem with chocolate does not solely rest on the consumers who have been unknowingly purchasing chocolate made from cocoa beans gathered by child labor or slave labor—the problem lies in the industry itself.”

Thankfully, five non-governmental organizations are working on eliminating child slavery: Mighty Earth, Be Slavery Free, Green America, Freedom United, and Fair World Project. Their continued pressure has been instrumental in pushing Cargill and Nestlé and others to begin making changes.

Cargill, just in 2020, has made some headways in addressing the situation, which is this: About 1.5 million of the world’s 4.5 million cacao farms  are located in West Africa, mainly Ivory Coast. (About two-thirds of the world’s cacao is produced in West Africa, while only a third of cacao farms are there—so, those farmers carry a heavy load.) The farms go back hundreds of years and are wearing out, they are not as productive as they once were. The plots are too small as they are being divided up again and again with each new generation. The farmers are very poor and don’t really get rich off of having a cacao plantation. They put their own children to work at a young age and they import children who are trafficked from Mali.

Cargill has now set up Child Labor Monitoring and Remediation Systems (CLMRS) in Ivory Coast (and in other places where they buy cacao) as well as a new program with Save the Children to “promote training and entrepreneurship for youth at risk of child labor,” according to its website. 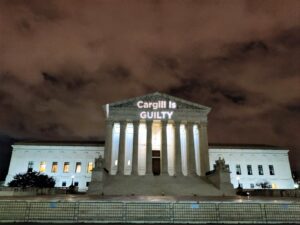 By May of 2020, 58,000 farmers in West Africa had been involved, about 4 percent. In spite of these initiatives, trafficking has increased since the pandemic. It is estimated that now there are about 2 million children forced to work in cacao production.

In college I had a Snickers bar or a Milky Way and a Coca Cola from the vending machine every night after dinner, but that was long before I was thinking about, or anybody besides Dorothy Day was thinking about, where things came from. We never had relationships with producers. My first real awareness of that idea started with reading Dorothy Day and was then followed by my introduction to Community Supported Agriculture, and continued with learning about the Fair Trade movement while writing for Southside Pride. I wasn’t aware of chocolate as a specific struggle until I saw the 2010 film “The Dark Side of Chocolate,” made by Danish filmmaker Miki Mistrati, who documented abuses with a camera hidden in her bag. From that day onward I’ve only ever eaten Fair Trade chocolate. I would recommend that everyone do the same. (Here’s the list of websites again: Slave Free Chocolate,  Fairtrade America and Fair Trade Certified.)  On these lists I recognized the labels I buy at the co-op: Alter Eco, Equal Exchange, Endangered Species, Theo. Altogether there were about 50 companies listed so of course I didn’t investigate all of them. But I researched quite a few. Very inspiring. Those small businesses are what it takes to make sure people get paid a living wage and can grow crops in ways that don’t destroy the environment. (One of the main problems with the giant industries is that they don’t pay a living wage.)

A big corporation like Cargill can do immeasurable damage with ease while the rest of us can scramble around working feverishly to undo the damage.

You can go to the site Fair Trade Advocacy to get involved in helping to stop child slave labor in West Africa.