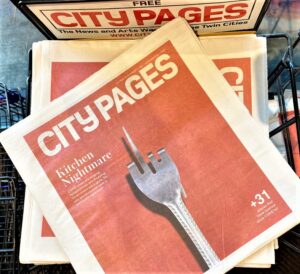 Throughout this pandemic, we have been noting businesses in various categories that have closed for good (and a few brave souls who opened businesses!).We’ve noted the impact on restaurants, breweries, retail and services, both vital (like groceries and pharmacies) and not so vital but still pretty important (like bookstores and hair salons). One business category we haven’t covered so far is our own—print and web-based news media. Local journalism. Now we are speaking of that.
One’s first thought is that this is a downstream effect from the temporary closings, capacity cuts, and sometimes permanent closings of the advertisers. There is a lot of truth in that view, but to put it into context, it just accelerated something that was already happening before 2020.
For instance, a major publisher of monthly papers, Lillie Suburban Newspapers, closed in October of 2019. The Twin Cities Daily Planet ought to have had a better shot, being all online and being a nonprofit, so not dependent on ad revenues. But they quietly dropped out of the scene a couple of years ago.
Still, 2020 has been the straw that broke the beast of burden’s back, and not only in big cities. Bringmethenews.com sums up the story of losses in sheer numbers:
Nationwide, the pandemic has closed more than 60 papers across the country … many of them the only news source for their respective communities. But this isn’t a new trend … the pandemic is just increasing the pace of the closures … About 1,800 newspapers in the United States have closed since 2004.
The two big losses in the Twin Cities this year are Minnesota Premier Publications (MPP), comprising Southwest Journal plus the magazines Parent and Good Age, and the last local alternative weekly standing, City Pages. There have been some others (The Growler is one I’ll miss), but these two were major.
City Pages was founded in 1979. Originally named Sweet Potato, it became City Pages in 1981. It was the newcomer to a head-to-head competition between two alternative weeklies in town, the other being Twin Cities Reader, founded in 1977. Then in 1997, both papers were bought by Stern Publishing, which also owned the Village Voice in NYC and six other city-based weeklies. They bought Twin Cities Reader solely to shut it down.
There were other sales, mergers and changes in the ensuing years. Probably the divestment of the owners in Backpage.com and CP’s dropping that feature played a part. Fast forward to 2015 when then-owner Voice Media Group began to wind down operations. Their first property sold was City Pages, to the Star Tribune publisher. The second, later in 2015, was the Village Voice.
It seemed that CP’s days of hard-scrabble were ending, with that sale. In an interview with the TwinCitiesPioneer-Press.com on the closing, former music editor Andrea Swensson said, “… so many alt-weeklies have come and gone, and City Pages endured so many changes. To be bought by the Star Tribune, it seemed like they were on safe ground, like that was going to offer some longevity.”
And so it was, when times, though tough in the industry, were relatively normal elsewhere. Obviously, that is not the way 2020 rolls.
City Pages did not have a lot of advance notice, although the Star Tribune is trying to get the staff jobs on the daily or other areas. Their last issue features a graphic that could become the icon for the whole cursed year. Inside they did a piece on the Atlas Aegis wannabe “poll watchers,” a what-the-heck-is-this photo (it was a pine marten!), and a piece titled “Why Would Anyone Open A Restaurant Right Now?”
And they had a touching collection of tributes, memories, and farewells from current and former staff. See it here: www.citypages.com/news/city-pages-is-dead-we-had-a-good-run/572915171.
The Southwest Journal story began in 1990 when a young couple, Janis Hall and Terry Gahan, started publishing out of their Linden Hills duplex. Over 30 years, they grew their paper into a small but powerful publishing company. During that time their home office got too small and they eventually bought a building downtown. Their daughter, Zoe, grew up to enter the family business.
They published two very popular free magazines (purchased in the 2000s), and after buying Skyway News in 2001 (and changing its name to Downtown Journal in 2005), kept it going through 2018. They hired talent from the Star Tribune (Linda Piccone in 1998) and Twin Cities Reader (David Brauer, former editor, in 2001). They employed legions of freelancers and won several top awards.
You can read Janis’ own memories here: www.southwestjournal.com/remembering-the-southwest-journal/2020/12/janis-hall-publisher-co-founder-1990-2020/. Although they have ceased publication, the business and downtown building of MPP are both still for sale (at the time of this writing).
This is truly one of the saddest losses (apart from lives and livelihoods, of course) of 2020 for a lot of us in the Twin Cities who care about and need good journalism. It’s certainly a blow to all of us at Southside Pride.