Yemen, and the endless war 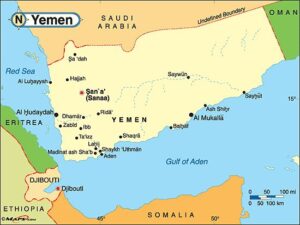 Recently, an ad from Vote Vets featured the father of a U.S. Navy Seal, Ryan Owen, who was killed in Yemen. Three million people watched it. They heard Ryan Owen’s father urge them not to trust Donald Trump with the lives of their kids. “Look what happened to my son,” Bill Owen said, decrying a botched raid.
The debacle happened when Navy Seals landed in a remote Yemeni village, Al Ghayyal, with instructions to carry out a night raid to capture a “high value target.” Nearby villagers, hearing a commotion, ran to the site. They disabled the Navy Seals’ helicopter. A gun battle broke out, and the Navy Seals called in air support. U.S. war planes fired missiles into various huts. Huddled in one hut were Fahim Mohsen, her sister and 12 children. A missile tore through the mud roof. Terrified, Fahim had to quickly decide whether to stay in the hut or guide the children into the darkness, hoping to flee. She chose to step outside, carrying her infant in one arm and holding hands with Sinan, her 5-year-old son. A helicopter gunship fired at her, killing her instantly. The infant lived, and Sinan, her little son, told his eyewitness account to Iona Craig, a brave journalist who went to Al Ghayyal to speak with survivors.
After reading Bill Owen’s message, on Aug. 30, Iona Craig sent out a tweet saying dozens of Yemenis were killed that same night in January of 2017. Remember the names of the children killed that night, she wrote:
Asma al Ameri, 3 months; Aisha al Ameri, 4 years; Halima al Ameri, 5 years; Hussein al Ameri, 5 years; Mursil al Ameri, 6 years; Khadija al Ameri, 7 years; Nawar al Awlaki, 8 years; Ahmed al Dhahab, 11 years; Nasser al Dhahab, 13 years.
In September 2016, in the small town of Arhab in northwest Yemen, the water table had lowered so much that villagers’ wells weren’t bringing up water. The people were desperate to feed their livestock and irrigate their crops. With no government or NGO to help them, they took a risk and cooperatively hired a rig, which they hoped could dig deeper and reach water. Weeks transpired with no success, but finally, when they were about to call off the project and lose their shirts, the rig hit water. Townspeople celebrated. Men danced and sang late in the night. As the gathering was breaking up, a Saudi warplane flew overhead. There had been rumors of new wells being targeted by the Saudis, but these celebrants had dismissed such fears as outlandish, certain they were too remote to be noticed. A Saudi pilot, perhaps trained by U.S. forces and using U.S. intelligence, pressed a button and a Raytheon bomb manufactured in Arizona was released. About the size of a compact car, the bomb dangled from the warplane. When the fuse broke, the bomb came to life. It sprouted three fins and then began hurtling, laser-guided, toward the target, the new well. Once the nose of the bomb hit the ground, 200 pounds of TNT exploded. Steel shards sped eight times faster than the speed of sound, maiming, crippling, blinding, disemboweling and decapitating people. The next morning, about 100 villagers, including children, gathered at the gruesome site. They tried to rescue survivors and collect the remains. But then a new Saudi aerial attack commenced and lasted for hours. Ultimately, 32 people in Arhab were killed, and 40 wounded. Jeffrey Stern, writing for The New York Times Magazine, traced the journey of Raytheon’s bomb from an Arizona factory to the village of Arhab where he sat with a survivor, Fahd, whose life had been ruined. Fahd was partially blind, crippled, constantly feeling anger and always suffering headaches. He took Jeffrey’s hand and pressed it to his face. Jeffrey felt parts of the missile embedded under Fahd’s cheekbone, his jaw and his forehead. Stern had traced the ordnance, he concluded, all the way to the face of a man who had thought, two years earlier, he had something to celebrate.
Stern also writes that after the well in Arhab was bombed, people in the area stopped digging new wells. Cases of cholera began to spread; a year later, one million people in Yemen suffered from cholera.
Boeing, headquartered in Chicago, manufactures SLAM-ER missiles similar to the missile which Raytheon sent to Saudi Arabia. Boeing is selling 1,000 such missiles to the Saudis this year. Boeing’s new CEO, Mr. David Calhoun, recently told a talk show host he didn’t think it would matter much, for Boeing’s profits, whether a Democrat or a Republican was in the oval office because the U.S. government always wants to defend the U.S.
But how do these weapons sales defend U.S. security?
And amongst people flummoxed or perhaps outraged when street protests in U.S. cities include destruction of property, are questions raised about how U.S. taxpayer-funded weapons and wars destroy lives and property in places like Yemen?
I believe such questions could guide us to seek safety in community, equality, justice and democracy.