They want you to perfume the sewers 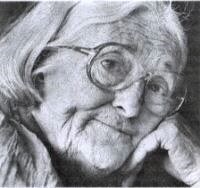 Editor’s note: The following remarks were delivered in 1988 by video to the Alliance for Cultural Democracy conference in San Francisco.

Let us all return.
It is the people who give birth to us, to all culture, who by their labors create all material and spiritual values.
No art can develop until it perpetuates and penetrates deeply into the life of the people.
The source of American culture lies in the historic movement of our people, and the artist must become voice, messenger, organizer, awakener, sparking the inflammable silence, reflection back to the courage and the beauty. He must return really to the people, partisan and alive, with warmth, abundance, excess, confidence: without reservations, being cold and merely reasonable; or craftiness, writing one thing, and believing another; not being a superior person, even superior in knowledge, in theoretical knowledge, an ideological giant, but bereft of heart and humanity.
Capitalism is a world of ruins, junk piles of machines, men, women, piles of dust, floods, erosions, masks to cover rapacity.
To these stinging sounds the people carry their young, in the shades of their grief, in the thin shadow of their hunger, hope and crops in their grief, in the dark of the machine, only they have the future in them.
Only they.