The race is on in the 11th Ward 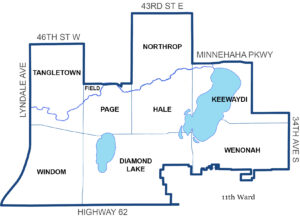 By the time we went to press, there were three candidates for City Council in Ward 11: the incumbent, Jeremy Schroeder; Dillon Gherna, a young gay man who worked on Hutchinson’s successful campaign for sheriff; and Emily Koski, the daughter of former mayor, Al Hofstede.
We asked all three these questions:
Would you support a full investigation into the killing of Terrance Franklin?
Do you support the 2040 Plan that up-zones the inner city?
Would you support transferring block clubs to the Minneapolis Health Department from the MPD?
Perhaps the questions were too difficult. They did require some knowledge of current events affecting Minneapolis. Or, perhaps, the two challengers felt it wasn’t necessary or important to answer, but, in any case, only the incumbent, Jeremy Schroeder, responded.
His answers:
1. A full, transparent investigation must follow any police shooting. In February 2020, the city agreed to pay $795,000 as part of a wrongful death suit filed by the family of Terrance Franklin after police shot and killed him. With this agreement, both parties agreed to settle the lawsuit.
2. The 2040 plan took effect in 2020 to appropriately zone Minneapolis so it can accommodate 35,000+ people projected to move here in the next decade. I ensured the plan has rules for new development that maximize public benefit, including by incentivizing affordability and sustainability. It does not eliminate single-family housing.
3. I’d like to see improvement in how the Block Captain program interacts with neighborhood associations, and housing it within the Health Department or another City department could accomplish that. Currently MPD oversees the program. Historically, there has not been adequate support for information sharing with other community members.
Schroeder demonstrates an understanding of the questions.
I disagree with his answers:
The City of Minneapolis paid out over a million dollars to settle the wrongful death suit when you add the amount the city paid for an independent attorney. The city did not contest the plaintiff claim that Terrance Franklin was murdered by MPD Officer Lucas Peterson. Officer Peterson continues to work for the city.
The 2040 Plan up-zones the inner city while leaving areas south of 42nd Street virtually intact, preserving single family homes in those areas that historically used restrictive covenants to prohibit people of color owning homes. The affordable housing for communities of color in the inner city will be replaced by expensive apartment buildings for Young Urban Professionals.
Block clubs today are organized by the police to fight crime. Block clubs organized by the Minneapolis Health Department could be used to help fight the causes of crime: poverty, lack of education, nutrition, child care, etc.
The citizens of the 11th Ward deserve a vigorous debate on the issues facing the city. Candidates Gherna and Koski let these pitches from Southside Pride slide past home plate without taking a swing at them. Hopefully, by next month, they will be warmed up and in better shape to hit the ball when it’s thrown at them.