Estimates range from between 1,000 and 1,200 people who gathered on Sunday, Jan. 3 to protest yet another police killing of a young Black man.
On Wed. night, Dec. 30, the Minneapolis police Strike Force/SWAT Team/Community Response Team/Roughrider Cowboys/or whatever this unit of the MPD is currently called, staged a sting operation to catch Dolal Idd selling a handgun to a police informant. 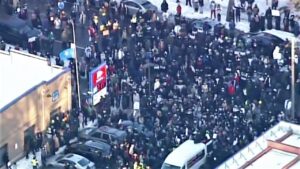 Dolal was well known to metropolitan police. Eden Prairie police records show 19 different incidents and arrests for him ranging from drug charges, to stealing i-Phones from a store, stealing a laptop from a person on Craigslist and breaking into cars.
Dolal had first caught the attention of the Eden Prairie police when they were called to his home to stop him from shooting off a gun in the basement shower.
The MPD heard Dolal was dealing guns, so they decided to take him off the streets. They coordinated with the Hennepin County sheriff’s office for them to raid Dolal’s house to find other guns at his home. They picked the Holiday gas station at 36th and Cedar as the location for the sale.
What could go wrong?
Well, the sheriff traumatized the family of small children during the 2 a.m. raid and didn’t find any guns at Dolal’s home, but at least the MPD didn’t kill a lot of innocent civilians shopping at the gas station.
They did kill Dolal Idd.
Did they have to kill Dolal?
Police say Dolal fired on them, and they were just defending themselves by returning fire. The body camera footage released by the MPD shows one officer returning fire after it appears (from the car window glass shattering out from the car) that Dolal fired a gun from the driver’s seat of his car. But we don’t know if other officers fired on Dolal before this.
Police love to confront a suspect with overwhelming force to make them surrender. We know from following their efforts that this doesn’t always work.
As we reported earlier this year, something similar happened with Thurman Blevins:
“He was drunk and disorderly, drinking Amsterdam Vodka straight from the bottle and flashing a gun, walking with his girlfriend while she was pushing their baby in a buggy. He sat down on a curb in North Minneapolis on June 23, 2018, and started talking to a dog. A neighbor had heard shots earlier and complained to 911. Officers Schmidt and Kelly pulled up in front of Blevins, jumped out of the car with guns drawn. Schmidt yelled, ‘Put your hands up. I will f—kin’ shoot you.’ Blevins started running away, trying to get as much distance as possible between the police and his girlfriend and his baby. The officers chase Blevins down a block and into an alley. He’s shouting, ‘I didn’t do nothing bro. Please don’t shoot. Leave me alone.’ The officers fire 14 times and hit Blevins four times and kill him.”
Maybe it would have been better if the police had stayed in their cars and announced through their loudspeakers that Thurman Blevins and Dolal Idd were doing something illegal and that they wanted to talk about it. Dolal was pinned in by at least four squad cars. He couldn’t escape. He needed to be talked down. He didn’t need to be killed.
Dolal Idd was a petty criminal. If he had been white, there’s a good chance that he would have been considered “high spirited” or a juvenile delinquent. Shooting a gun off in his family’s basement, shoplifting, drugs—these don’t seem like dangerous crimes, especially if committed by a white person. In his final confrontation, if he had been white, there’s a strong likelihood that the police would have tried to reason with him and convince him to give himself up peacefully.
Jaylani Hussein, the executive director of the Minnesota chapter of Council on American-Islamic Relations (CAIR), who helped organize Sunday’s protest, told the crowd that, in the wake of Floyd’s death, he didn’t believe the narrative of the police, and he called for an independent investigation. He said the bodycam footage shared by Minneapolis police is “inconclusive” and criticized it for being edited: “Right now every fact that we have received has either been inconclusive or it has led us to believe there was misconduct by the police based on a lie from an informant.”
More than a thousand people marched on Sunday, Jan. 3, to demand a full investigation and justice for Dolal Idd.