Karl Marx said, “History repeats itself. First as tragedy, then as farce.”

The reaction to the killing of George Floyd was somber with serious consequence. The assault on the Capitol was opera buffa, a “tale told by idiots signifying nothing.” 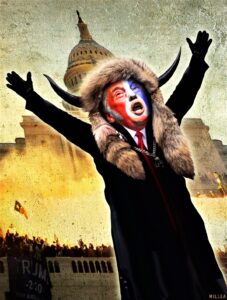 A South politician preaches to the poor white man
“You got more than the blacks, don’t complain
You’re better than them, you been born with white skin,” they explain
And the Negro’s name
Is used, it is plain
For the politician’s gain
As he rises to fame
And the poor white remains
On the caboose of the train
But it ain’t him to blame
He’s only a pawn in their game

Five people lost their lives on Jan. 6 because Donald Trump wanted to stop the counting of ballots that would declare Joe Biden president. It is clear from the videos of the rally before the march on the Capitol, that Trump, his son, Don Jr. and his personal lawyer, Rudy Giuliani, incited about 8,000 people to march two miles down the Mall to the Capitol and stop Congress from performing their duty.
They broke windows and doors, assaulted the Capitol Police, broke into the Senate chambers, interrupted the counting of ballots, then wandered around committing minor acts of vandalism and eventually left. The counting of ballots by the Congress stopped when the protesters breached the Capitol, and the counting started again in a few hours after they left.
It was a protest. It wasn’t a coup or an attempted coup.
It could have been a coup. I’m sure Trump considered it. His paramilitary adventure in Portland, Ore., where Erik Prince organized volunteer border guards and others into a unit loyal only to the president that cleared demonstrators away from the federal building, was organized outside the regular chain of command. It could have been a dress rehearsal for military units marching into the Capitol and closing it down. Trump said he would join the protesters. He didn’t. If Erik Prince would have organized a Praetorian Guard to surround and protect Trump, if they would have waited until the advance of the protesters broke into the Capitol, then Trump could have marched into the Capitol and declared he was dissolving the Congress and restoring law and order.
That’s the blueprint for coups. But the essential ingredient that was missing from Trump’s coup was the support of the military. You can’t really have a successful coup without the support of the military, and Trump has been reported calling soldiers who have died in combat “losers” and “suckers.” He’s antagonized longtime international allies and befriended longtime military antagonists. Erik Prince, America’s foremost mercenary, may not be patriotic but he’s probably not an idiot. He could read the tea leaves and saw there really wasn’t much hope for a military coup, and, even though Trump pardoned four of Prince’s former employees in Blackwater who had slaughtered civilians in Baghdad, he probably declined to participate. He probably also convinced his sister, Betsy Devos, to resign as secretary of education and leave the sinking ship.
So, on Jan. 6, Trump could orchestrate chaos, but he couldn’t organize a coup.