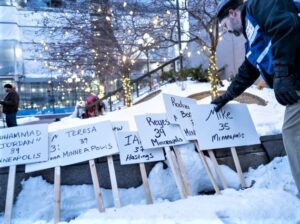 In the late 1980s Erick Everson was hanging out in the Whittier neighborhood of Minneapolis and was a frequent and friendly face at the Simpson Shelter. He battled mental illness. When Erick was doing well, he did odd jobs in the area such as helping out at a video store, delivering newspapers, etc. During the summer of 1990 the shelter closed for a while. The Simpson staff and advocates heard that no one had seen Erick lately and became concerned about him. In late August, two weeks after his 39th birthday, Erick’s body was found behind the Lake Street Kmart. He had been murdered by a fellow homeless man who was in a drunken rage. It seems there was a dispute over Erick’s cigarettes. The family was, and continues to be, devastated by the tragic loss of this outgoing, bright, creative son, brother and friend. Some months later the Minneapolis police informed the family that the perpetrator confessed to the crime while in detention on another charge. Despite the violent nature of the crime, the Star Tribune dedicated just one paragraph to Erick’s death—a newspaper Erick once delivered.
On Jan. 21, 2021, Twin City headlines reported the death of a homeless person, and another injured. This occurred in a St. Paul encampment where in an effort to stay alive the unsheltered individuals lit fires. Firewood and propane heaters were found at the site. This was St. Paul’s third death of an unsheltered person in the 2020-21 winter. The first week of January 2021, Minneapolis police reported a suspicious death at the Minnehaha Park Drive encampment. The deceased man found in a tent showed signs of trauma and was discovered by volunteers who were assisting the campers in finding shelter. The police had posted notices of eviction on Dec. 31, with a 72-hour window to vacate due to unsafe weather conditions. The death is under investigation.
John Petroskas, a longtime volunteer in the effort to end homelessness points out that the Minneapolis incident is much more common than the St. Paul one. “People often ask if exposure to the ele-ments is a common cause of death. It is not. More often the cause is homicide (including domestic), suicide, overdoses and accidents. We have a lot of alcohol and drug addiction in the homeless community which compounds existing conditions.”
People who have lost a loved one often report a concern, a fear that their loved one will be forgotten—dust in the wind. Hence, propelled by the Simpson Shelter and the Minnesota Coalition for the Homeless, each year in December, advocates, family and friends of those who have died while homeless or unsheltered participate in a ceremony to remember and honor the lives of those lost. It is known as the Homeless Memorial and draws statewide participation. Loved ones may have died in a tent, bus stop, under a bridge or in a homeless shelter. Advocates collect names during the year and submit them to Simpson Housing Services. Some bodies are not identified, their names missing, yet they are honored. John Petroskas keeps and manages the list.
The ceremony typically begins at the Hennepin County Government Center and the advocates, family and friends walk two miles (often carrying signs with the name of their lost loved one) to the Ply-mouth Congregational Church where the ceremony is hosted and continues. As the name of each deceased individual is read, a candle is lit: Benito, Laura, Max, Elton, Danetta, Bohdan, Sister Mar-garite, and so on. One hundred and ninety-seven names were read for 2020. Losses included Baby Boy, Unidentified Man, Unidentified Girl and George Perry Floyd. Typically, a meal is shared afterward, as are memories and stories about the deceased. It is a community, strong and determined to recognize those often marginalized and viewed as a group, rather than as the unique individuals that they were. 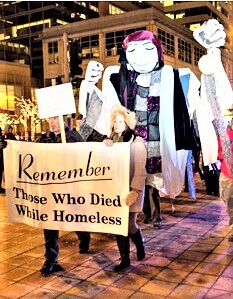 2020 marked the 36th annual Homeless Memorial honoring the deceased. It was a virtual event due to the COVID-19 pandemic. Lt. Gov. Peggy Flanagan was a guest speaker as well as Jennifer Ho, Minnesota housing commissioner. Flanagan stated that she looks forward to the day this event will not be needed. A total of 197 individuals were honored; 84 died unsheltered, 89 were formerly homeless but sheltered (often in homeless shelters) at the time of death and 24 were advocates who worked with the homeless. In 2019, 103 were honored. The average age of those who died unsheltered was 42-43 years. The average age amongst those who were homeless but sheltered, 50. Mortality rates for those unsheltered is 4 to 9 times higher than those who are sheltered (Centers for Disease Control and Prevention).
What are the causes of death? Often it is a combination of things: disease, illness, drug and alcohol related, mental health issues, suicide, homicide (often at the hands of an acquaintance), accidents and lack of proper medical care. There are incidents of drowning and being struck by a vehicle. The opioid epidemic, declared a public health emergency in 2017 (by the Centers for Disease Control and Prevention) along with an international pandemic, has created a new kind of vulnerability, especially for those without shelter.
This year videos were invited and submitted for the event. During the presentations, voices shook and tears fell as loved ones recalled their beloved and shelter and social workers recalled their clients. It is the little, unique things and gestures that family, friends and advocates remember and will miss. Some of the people remembered were:
– The young father who loved his kids and liked to bring them to the shelter. Those around felt the joy he had for them, and they for him.
– The Ojibwa man who was intelligent and had boundless energy to engage anyone who had time to discuss sports, politics, music, etc.
– Sam who loved the thrift stores and picked up items for others, remembering their needs, sizes and favored styles.
– The young woman who visited to pick up supplies but would not stay in a shelter because she did not want to leave her kitten “Boots” who had his own baby stroller.
– The tough guy with scars to prove it, who loved his dog and treated it like a baby.
– The collector who hid his finds in the nooks and crannies of the shelter and told off-color jokes—even in church!
– “Coffee Man,” known for making the best strong coffee and trained newcomers to do the same. One newcomer says he will honor his lost elder by always making the strong coffee he taught him to make, and toasting him as he drinks it.
– The man who often surprised others with hidden talents such as furniture building and writing poetry in Gaelic!
– The two Native women who stuck together for years, no matter what. A staff member said, “I learned a great deal from them about resilience and attitude. I will miss them dearly.”
Homelessness impacts all of us, not just unsheltered individuals. It impacts the availability of health care resources, crime and safety, the workforce and use of tax dollars. A 2017 study presented by The National Alliance to End Homelessness reveals that by properly sheltering people it is estimated that health care costs would be reduced by 59 percent, emergency services by 61 percent and hospitalizations by 77 percent. The study estimates an overall savings of $4,800 per (unsheltered) person per year. Beyond dollars saved, this is an ethical issue. It involves economic and racial disparities and inequities. Native Americans made up more than a quarter of those who died homeless or unsheltered in 2020 while they represent just 1.1 percent of the Minnesota population. Put simply, sheltering people is the right thing to do.
I’d like to borrow from Deb Holman, outreach worker from Duluth who shared a beautiful quote: “Please when you meet a stranger treat them well, under a ragged coat there may be wings.” (Osler)