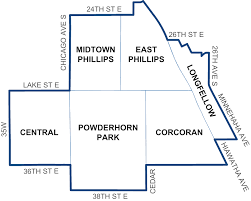 Ninth Ward City Council Member Alondra Cano has decided not to seek reelection. As we have done in the past, Southside Pride was thinking about hosting a candidate forum. But there are other groups planning forums, https://fb.me/e/3urzdqKEN, for example. There are five candidates seeking the DFL endorsement and I have thought that restricting candidates to two-minute answers to complicated policy questions, and three-minute introductions and biographies was unsatisfactory. The real world is complicated, nuanced, and council members don’t make decisions on two-minute answers. Instead, I decided to interview all five candidates on Zoom with the opportunity to answer questions more in depth.
I will give some impressions in this article, but the meat of the messages will be in a video that I have edited from the five one-hour interviews. I encourage you to watch them, they are fun, intelligent, enlightening and hopeful.
We are blessed. The 9th Ward (Phillips, Powderhorn and a small strip of Longfellow) has five people that have put themselves forward who will teach you, will make you care and will challenge us all to try to make the world better. I found the experience of talking to them fulfilling, and I believe I have made some new friends.

*Carmen Means (carmenforward9.com), an articulate student of history. A proud Black woman who is angry about the killing of George Floyd and is committed to making things better. She talks with knowledge and passion about economic exploitation and the need for the community to take power, and through its power, govern and protect itself.
*Haji Yussuf, an East African father of four. He is worried about the safety of his children. He believes the police represent a danger to his children, and all the children in the city. He was inspired to political activism by Paul Wellstone and says he aspires to be the Black Wellstone, or the immigrant Wellstone. He briefly ran for Congress last year before endorsing Ilhan Omar. He ran to have a platform for his message, a message of inclusion and change.
*Jason Chavez (jasonchavez.org), at 25 years old the youngest of the five candidates. Born and raised in Phillips in the 9th Ward, he tells of growing up with toxic soil, ineffective government, abusive police and a loving family. Since graduating from St. Scholastica in Duluth, he has been working at the state legislature for progressive officials and committees. He currently works for Mohamud Noor, whose district includes part of the 9th Ward. He has been chair of the Young DFL, and was a strong supporter of Omar Fateh’s successful Senate race last year.
*Rita Ortega (ritaforward9.com), a lifelong resident of Phillips and Little Earth Housing Project, is the only candidate that has City Hall experience. As a former policy aide to current 9th Ward Council Member Alondra Cano, she highlights her experience in how things work, her knowledge of the system, and familiarity with the people. She has had a life full of activism and commitment. She is part of the Little Earth Patrols that protect her community and tells a dramatic story of turning away the National Guard from traveling down Cedar Avenue last spring. She talked about her vision for a better city government, and said that citizens need to channel their hurt and anger into constructive directions.
*AJ Flowers (ajforward9.com), grew up around activists, fighters for justice here in Minneapolis. Mr. Flowers does not support abolition or defunding of the police. He is a supporter of Chief Arradondo and believes we can achieve accountability through reform. He believes that unsheltered people need to be able to camp in the park, he also believes that the needs for a safe place for children to go for recreation must be addressed. He wants peace, and believes that divisive triggering actions are not helpful.
I was impressed with all of the candidates, but the real question is who would make the best City Council member. All of them bring commitment, passion and intelligence to the job. I am persuaded the best of this excellent group is Rita Ortega. Her organizational experience, her cultural sensitivity, her City Hall experience and her grit and belief in the community has tipped the scales in her direction for me.
Your mileage may vary.

See a candidate forum at https://youtu.be/5T56nLvP9mw