Two tormented 21-year-olds unleashed a storm of death and sorrow last month in Atlanta and Boulder.
Why?
There are no easy answers.
They were both victims of bullying.
Robert Aaron Long was bullied by his evangelical church to hate and fear his natural need for sexual expression. He was convinced he was a sex addict. He was in and out of treatment for the last two years. He checked into a halfway house for five months beginning in August of 2019. His former roommate said Long would confess to relapsing once a month and go to a massage parlor to have sex, and then rant about God and his parents and the Bible. He told police he wanted to “eliminate temptation” by murdering sex workers.
Ahmad Al Aliwi Alissa was bullied in high school. His classmates made fun of his name and his religion, Islam. He had become withdrawn and paranoid. Friends said he often thought people were following him. 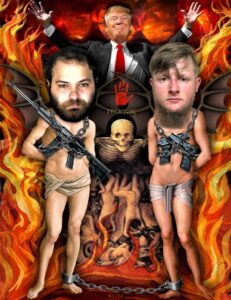 Both men deserved to be comforted, not shamed and made to feel like outcasts.
They grew into manhood in the Trump years. It was a dog-eat-dog world. Social Darwinism. Covid-19 was a gift, a way to cull the herd, get rid of the sick and the elderly, the dregs of society—a way to build the Master Race. Survival of the fittest.
Trump was the strong man. He crushed anything in his way. He never backed down, never gave up, never admitted defeat. He encouraged thousands of his supporters to storm the Capitol and stop the government from certifying Biden as president. The rule of law was for sissies. His will was all that mattered. And when Kevin McCarthy, the Republican Minority Leader in the House, called Trump and asked him to call off his thugs, Trump said, “Well, Kevin, I guess these people are more upset about the election than you are.”
Was Long upset about the election? As a fiercely fanatical white evangelical, one can assume he was anti-choice and a Trump supporter. As a Georgian, he must have felt that his state was turning its back on Jesus—electing Biden over Trump and then electing two Democratic senators. Was this part of the trauma pushing him over the edge?
Did politics play any role in Alissa’s act of horror? Did he drive from Arvada to Boulder just because Boulder is a bastion of liberalism, and he was going to teach those elitists a lesson? There’s a copycat quality to Alissa’s act. On the same day Long committed his mass murders, Alissa purchased a Ruger AR-556 machine gun pistol.
Clearly, we have to change our gun laws. Weapons of war and mass murder must be immediately banned. They have no place in a civilized society. America, with 4% of the world’s population, owns half of the civilian-owned guns. We have eight times the number of deaths as a result of gun violence as Canada and a hundred times more deaths than Britain. Forty thousand American lives are lost every year from gun violence.
But we also have to change the way we think of ourselves as a community. It can’t be dog-eat-dog any more. Capitalism has to become more humane and less aggressive and predatory. It can’t be a zero-sum game—where there’s only enough pie for one of us and the other one starves. There’s enough for everyone.
When I was a child attending Mass at St. Helena’s Church, Father Don told the story of a young man led down the corridors of eternity. The angel pushed open the first door, marked Hell, and there was a great table piled high with wonderful food and people sitting on high stool with knives and forks too long for them to feed themselves. And the people were starving and the door closed. And the angel opened another door marked Heaven, and there was a room with a great table piled high with wonderful food, and the people were seated on high stools with long knives and forks too long to feed themselves, but they had all learned to feed the person sitting across from them.
I think that’s the way out of our torment.