There was a lovely piece in the Pioneer Press in February about Bryan Ring bringing help and hope to the homeless camped out near Sheridan Park in North Minneapolis: “Stillwater man is godsend to people living in Minneapolis homeless camps.”
“He brings sleeping bags, food, hand warmers, propane tanks and winter clothes, neatly labeled in bins. One huge black garbage bag was filled with men’s winter coats; another had sweatshirts.” 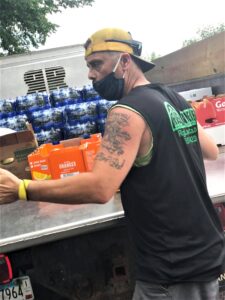 He uses Facebook and Nextdoor in his hometown of Stillwater to get people to donate essentials, and then he drives down once a week in his Ford pickup truck and brings comfort to people left out in the cold Minnesota winter.
“Ring said he has been moved to tears by the people he has met in the camps, especially a 3-year-old boy named Ian and a woman in her 70s. ‘I’m tearing up just now thinking about her,’ he said of the woman. ‘When I left her at camp, I honestly felt like I Ieft my mother there. I cried the whole way home.’”
I knew Bryan’s grandmother. She operated Ring’s Hobby Center on 42nd Street and 29th Avenue South, just across the street from where I grew up. I used to go over and talk to Mrs. Ring when I was 10 years old. She taught me about making plaster of Paris statues. She showed me how I could make money by mixing the powder into paste, pouring it into a mold, painting it and selling them. She gave me my first lesson in classical economics. I could buy raw materials from her and make them into a product I could sell. I would be a manufacturer. In Marxist terms, I would own the means of production. My labor would be the significant factor in adding value to the product. I could make a fortune. There was no limit to the amount of statues I could produce from just one mold.
But, of course, there was a limit to the number of little Santa Claus statues I could sell. My dear maiden aunts bought one for a dollar, and that was the extent of my sales and the end of my career as a figurine manufacturer. I lost money on the experience, but I learned a valuable lesson, and I will always be grateful to Mrs. Ring for teaching me how the world works.
And now, her grandson Bryan is showing how, for some of us, the world doesn’t work.
She taught me about capitalism, and he demonstrates social responsibility.
“Every once in a while, I’d get the strange eye from somebody, and I’d have to let them know, ‘I’m Powderhorn. I’m Southside,’ you know what I mean? From there, realistically, relationships were built. For me, it’s where I grew up. I genuinely care about these people.”
I grew up with Mrs. Ring’s two oldest sons, Harvey and Ken. Harvey ran Dick and Harvey’s Appliance store just across the alley from our home. He was a gruff guy with a heart of gold. He’d fix the belt on your washing machine and not charge you for it. Ken was a big help when I was running for office. He is Bryan’s father.
The Pioneer Press article ends: “Ring said he would like Gov. Tim Walz and Minneapolis Mayor Jacob Frey to tour the camps with him and other volunteers and see firsthand how people are living. ‘They should get to know the people in these camps,’ he said. ‘We shouldn’t have to be out here. It is mind-boggling that there is so much devastation, depression, drug usage and mental illness and no real solution to help these people. Housing is the first step, of course. Real hands-on treatment and job placement are next.’
“’You look someone in the eyes, and you see that they are at their absolute lowest, but they see you, and then, all of a sudden, they’re like, ‘Oh my God, there is hope in my life.’ I’ve just done the work, made the connections, never judged. I honestly believe that God puts you where you are needed.’”
I don’t expect to see Gov. Walz or Mayor Frey talk to the homeless in the northside camps. And I don’t know much about God’s plans for where Bryan is needed, but the homeless and the helpless could sure use someone like Bryan Ring in Congress rather than the Trump-supporting-anti-relief-bill Tom Emmer.