Chicago and 48th Street — who made it through? 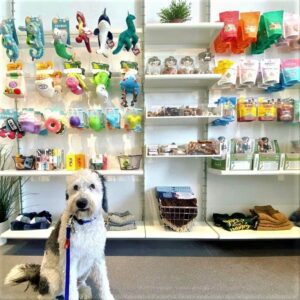 Despite its genteel relative prosperity, the business and residential hub around Chicago Avenue and 48th Street has had a rocky year and a bit. It’s only a few blocks south of George Floyd Square, so there has been some disruption to traffic flowing through. There were some closings; it’s impossible to say how many, since a lot of the businesses there don’t have a direct street frontage and are very small anyway. But here’s what we found out.
Since this neighborhood is getting its second COVID focus, I had a look at last year’s article. (https://southsidepride.com/2020/04/20/chicago-avenue-in-the-time-of-covid-19/) Of course, this piece was a month before the murder of George Floyd. And it was during the “stay-at-home” period. Although COVID cases and deaths were rising then, looking back now it was still in very low numbers. Walgreens and Kowalski’s were open normal hours, and masks were just “suggested.” I made one trip to the Chicago Avenue Walgreens that month. They were out of toilet paper and alcohol, and no one was wearing a mask.
For some reason, someone involved in the looting of stores in the peak days of the early summer uprising really had it in for Walgreens. The three Walgreens pharmacies in South Minneapolis east of I-35W were damaged to the point that they were closed for months, and then had mobile pharmacies in their parking lots for a few more months. Although the one at Hiawatha and 46th is now fully reopened, the one at Chicago and 43rd is not. It’s still operating out of a glorified trailer, and is also surrounded with cement barricades and other daunting security apparatus. I guess this is because it’s only five blocks from George Floyd Square. Other businesses in the immediate vicinity are unaffected. 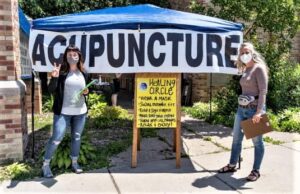 In April 2020, retail shops other than vital necessities, movie theaters and all performance venues, bars, gyms and personal services such as hair salons were all completely closed. Virtual entertainment was not fully set up, and ordinary people were just learning how to Zoom and use other now ubiquitous online connections. Reading last year’s coverage and trying to decide what to say now is like reading a dystopian novel that I dreamed I lived in.
Services in the area are generally more available than they were in 2020. There is a newish barber shop at the far end of the little row of shops that includes Ken and Norm’s Liquor Store and the Minnehaha Animal Hospital — Southside Barber Lounge. This is an extension of an existing shop at 38th and Bloomington, and they opened the new location in early June 2020. They advertise as LBGQT-friendly and have many glowing reviews online.
Speaking of Minnehaha Animal Hospital, the usual protocol around here for veterinary services is that the lobby and waiting room only is closed. Usually you’ll be asked to wait in your car or outside with your animal, and they will come out and get them. A few vets will do house calls for very sensitive services, such as euthanasia. Another great animal service in the Shenandoah storefronts (except it’s around to the side, just off the parking lot) is Bubbly Paws, a pet grooming self-service facility.
Pedego, the dealer and renter of electric bikes, has moved out of Minneapolis and now only operates from Eden Prairie. In their space (more or less) there is a new shop that sells nothing but sneakers—very pricey and high-style sneakers—and sports fan gear. It’s called undrgrnd MPLS. 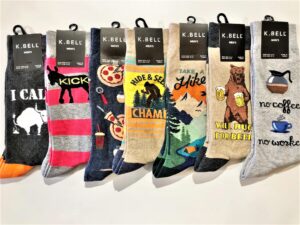 In retail terms, 14 Hill kind of dominates the intersection now. It’s one of those unclassifiable shops that are often called gift shops, but that’s a bit of an undersell. I have to not go there unless it’s for, literally, a gift, and even then, I am prone to impulse buying. They just have so many clever, or cute, or otherwise subtly desirable objects. Just the sort of thing my apartment is already stuffed with, and I am trying to responsibly thin out. Things like cookbooks, and very arty jigsaw puzzles, games, journals and stationery.
Echo Bodine’s shop, which was down the road a ways, the Center for Intuitive Living, closed about a year ago. Her books and some classes are still available online. Kowalski’s, the main grocery store for this neighborhood, has been open almost as usual for the entire period. They were one of the first to enforce a mask policy. They also developed a delivery service early on, using a service called Shipt. I have used this service a couple of times and it was a very good shopping experience, as is in-store shopping.
The Parkway Theater has managed about as well as most of our neighborhood film theaters. Numerous in-person events were hopefully scheduled, then prudently canceled. Meanwhile, the pivot to virtual events was successful. Now they have some events described as hybrid, with two levels of ticketing. Higher priced, very limited indoor seating, plus unlimited streaming tickets to make up the numbers.
Calvary Lutheran and Urban Refuge churches have both been going strong in online mode as well as providing food and other missions to the neighborhood. One service Calvary Lutheran was providing since last summer and up to at least February is called Acupuncturists Without Borders and is free or pay-what-you-can acupuncture and a healing circle.
We’ll finish off with the food service establishments, where there is a bit of news. Two good (quick, cheap, high quality) places that closed over the past year are Burrito Mercado, next to the Parkway, and R. A. MacSammy’s Elbow Room, a unique concept combining mac and cheese with sandwiches. 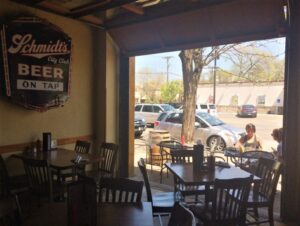 Bagu Sushi and Thai has made it through OK so far. Last I heard they were still in takeout or deliveryonly mode. But patios are opening fast, and they have one, so maybe call and check. They open at 5 p.m. Pumphouse Creamery is still around, and can be delivered by Bite Squad. They were only open three days a week and limited hours through the winter, but they recently updated to noon to 5 p.m. seven days a week! (I highly recommend the Lemon Olive Oil ice cream.)
Turtle Bread is one place that’s been open as much as allowed for indoor dining, and also for in-store ordering to grab and go. Biga Pizza was closed for many months but is now open for takeout. There is a sidewalk seating area shared by Turtle Bread and Biga Pizza, now that the weather is good. 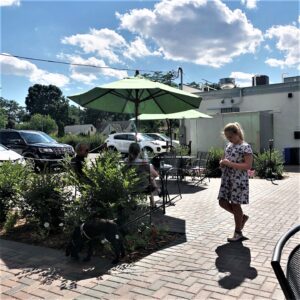 Town Hall Tap is part of a small chain of Town Hall establishments, serving their own craft-brewed ales as well as other good food and drink. While the chain kept one or more places open as much as possible, the Tap was one that was closed for quite a while. It is now fully open for patio or indoor dining, according to Google and my streetside observations.
Sovereign Grounds has recently opened limited indoor dining, and they also have a small patio. This is after having been takeout only for a long stretch. Their parent-child playroom is still closed. I dropped by a couple of weeks ago and it was busy with happy neighbors.
Heather’s, way down south at 52nd and Chicago, is still going strong. They also recently reopened their patio, which requires reservations. Check out www.heathersmpls.com to see their tempting menu and hours and to make a reservation or order takeout. 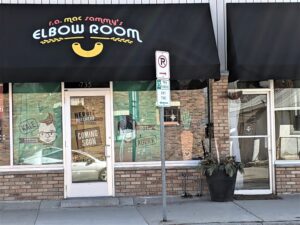 Saving the really big news for last, a fried chicken outlet with a major difference is coming soon to the former R.
A. MacSammy’s space. What major difference? Here’s a clue: it’s called Herbie Butcher’s Fried Chicken. Still don’t get it? This will be vegan fried chicken, brought to you by Aubrey and Kale, the sister-brother team that founded and owns the wildly popular Herbivorous Butcher. This is one I look forward to with eager anticipation.