So much happening on East 38th Street! 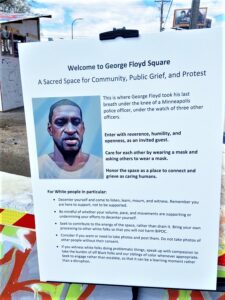 George Floyd Square is still there! That’s the headline, but it’s not the whole story. Over the past eleven-plus months, several attempts have been made to close down the “occupation” and reopen the streets. GFS has continued to evolve, but it’s still there.
Some of the calls have come from inside, from people who live within the closed-off blocks, or nearby. There have been three violent deaths in the square, and other victims who died later from harm inflicted there, including one premature baby born after her mother’s murder but only surviving a few weeks. Even one death is too many, but you cannot say the existence of GFS alone is why they happened. Or even that there would have been fewer deaths there if GFS had not been the response to Floyd’s terrible murder, or had been shut down quickly.
A more persuasive appeal comes from Black business owners in the square. “Guardians” at the barricades determine who can come in, and theoretically, coming in to patronize Black-owned businesses is a pass. But owners say the protestors alone don’t buy enough to make up for halted traffic and bus transit, and that the guardians don’t even let every potential customer in anyway. And also, they have complained that the city has not made their plight a priority at all, which is probably true, and wrong. 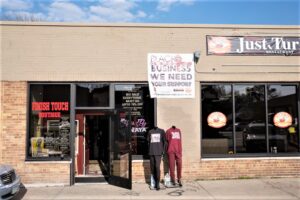 According to the Minnesota Spokesman-Recorder: “A group of Black-owned businesses at the intersection formed [a collective] in early April 2021 to advocate for financial assistance from the city and to reopen the intersection. The group said it had joined the community in calling for justice for Floyd, but they believed that the autonomous zone had ‘unintended economic downfall’ for local business by using them as ‘sacrificial lambs’.”
Among the Black-owned businesses in the square making up the 38th Street Black Business Collective are Smoke in the Pit, Just Turkey and Dragon Wok, all small restaurants, and Finish Touch Boutique, a retail store.
You can keep up with the happenings at GFS, including mutual aid projects, and special times like the spontaneous celebrations that took place there when the guilty verdict came in the Chauvin trial (we still have three more to go), by following it on Facebook. If you want facts and history, Wikipedia has a very thorough entry. If you’re white and want to visit in person, see the guidelines for conducting oneself while there. Be sure and visit the Black-owned businesses for sustenance or purchases too.

Places we know of that closed in the past year

Or that closed a while before that and nothing seems to be happening there? We’re talking about the Southside Farm Store at this point. That seems like a prime location and I’m surprised it’s not for sale, at least. (And as you’ll see further on, there are new businesses happening still, not only closings.)
One casualty of COVID was Svasti Yoga at Bloomington and 38th Avenue. Another was Courageous HeARTS, an arts nonprofit that had earlier moved to 23rd Avenue and 38 Street from Cedar and 42nd Street. Its space has been utilized in launching a new nonprofit—more on that below.
Two other closed businesses with new businesses in their spaces are A Tree Service, a small company at 38th and Longfellow, and A Cupcake Social at 28th Avenue and 38th Street. Although A Cupcake Social is gone for good, not even going back to its former incarnation as a food truck, it appears A Tree Service is just closing its location but is still in business via their website and established networks.
Daily Provisions, a coffee shop with snacks and convenience items, closed and was quickly replaced, before last year’s 38th Street celebration, by Key West Bistro, which is still there. Tiny Diner was closed at the time of last year’s article, was open on the patio and for takeout for the summer, and then closed again, possibly permanently. I have heard unconfirmed rumors that the Farmer’s Market there may be back this summer.
But the biggest, most shocking closing was the Hiawatha Clinic, part of the Fairview/University of Minnesota Health network, along with its pharmacy and sports health clinic. This means that, among other things, 38th Street no longer has a pharmacy anywhere along its length or nearby. No word on the future fate or utilization of the building.

In the former site of the tree service company on East 38th Street at Longfellow you will now find a mostly outdoor gym. Called Frost Iron Training, it’s (I believe) the first onsite option of an existing training system called Hardshell Fitness LLC, which specializes in kettlebell training. I have seen them doing small group training in the yard/parking lot of the site in freezing temperatures. Hardshell indeed.
Nearby, in the former site of Courageous HeARTS at 2235 E. 38th St., is a very different gym. It’s a nonprofit, set up so that donations could cover the costs of offering training and health to usually underserved populations. It’s called Ludy’s Gym Champions Only Boxing and Fitness. They train youth and adults, and as the name suggests, specialize in old-style boxing for fitness, and also train for amateur or professional competition. Both of these new gyms have good websites where you can find more and get involved.
I missed the opening of Southside Barber Lounge on Bloomington Avenue at 38th Street. As near as I can tell, it opened in June of 2019. (This is the original location of the barber I recently mentioned at Chicago and 48th Street.) They have a very smooth website.
Also, in a piece last month we mentioned that Infused Life, a plant-based cafe selling juices, smoothies and bowls, had departed the Midtown Global Market for a larger venue. Well, they are now open (or soon will be?—the signage has been up for a while but I have not been able to visit in person yet) in the former location of A Cupcake Social, right on the southwest corner of East 38th Street and 28th Avenue. Infused Life changed its name from “A Plant-based Eatery” to “A Plant-based Emporium.” It is owned and operated by a Black woman.
Another Black woman-owned, plant-based and health-informed location is either open or soon to open quite nearby, as it happens. This one is called Dripping Root, and seems to have fresh juices only. This is at 4002 Minnehaha Ave. and Google says it will open May 29. I will try to visit both sites and give an update in the Minnehaha Avenue article.

What we have and don’t have on East 38th Street 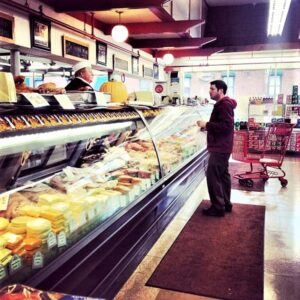 Meats and deli at Everett’s Foods

We have lots of grocery shopping options on 38th Street. Everett’s Foods is small and traditional, with an excellent butcher and house-smoked items and a decent produce section. The Tom Thumb at 24th Avenue and 38th Street is a convenience store with a good selection. Tare Market is innovative and looks to the future, with a zero-waste model and bulk foods.
Our biggest grocery option is of course the Seward Co-op Friendship Store. It’s been a few years now, but the advent of this store changed my life, and improved the quality and health of the whole neighborhood in many ways.
We don’t have a pharmacy now. We no longer have a traditional medical clinic. We do have a lot of alternative practitioners, though, including Southpoint Community Acupuncture. We don’t have a library, but the Roosevelt Library is pretty close and guess what—it’s finally open again. 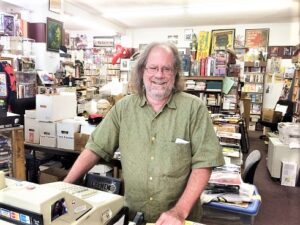 As far as I know, East 38th Street has only one bookstore, but it’s a great one. DreamHaven sells science fiction books, graphic novels, comics and comic fan paraphernalia. It’s open for in-person shopping, but also does a bang-up job of online shopping for such a small store.

Penultimately, here is a roll call of the fine, the fast and the quirky eating and drinking options along 38th Street (west to east approximately):
• Rincón 38
• Victor’s 1959 (Cubano)
• Good Times Pizza
• Petite Leon 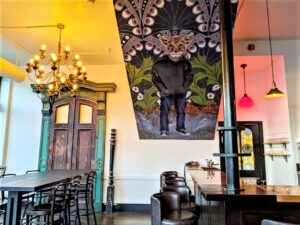 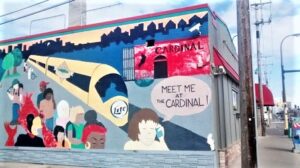 Lastly, we have a few faith communities along the street. Greater Friendship Missionary Baptist Church is a spiritual anchor, holding down the corner of 26th Avenue and 38th Street. Senior Pastor Billy G. Russell, along with his wife, First Lady Theresa Russell, celebrated his retirement at the end of April.
Two related community churches share the church building at 22nd Avenue and 38th Street: Bet’el Afaan Oromo Evangelical Church, and Iglesia Cristiano Alfa y Omega. Both are part of the Converge North Central federation and movement, which also includes the large and well-known Hope Community. 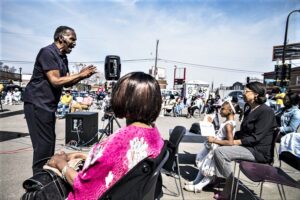 And ending up back at George Floyd Square, Worldwide Outreach for Christ Ministries has been a big part of the community work to sanctify and heal the Chicago and 38th neighborhood. The church now sponsors the George Floyd Worldwide Healing Project. 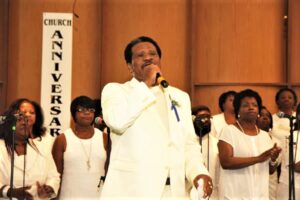