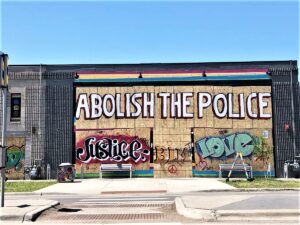 Timing is everything in the newspaper game. Last year, the piece on Minnehaha Avenue’s ink was barely dry when, on 38th Street and Chicago Avenue, Derek Chauvin murdered George Floyd while being video-recorded by a teenage girl. Just before the end of the month of May, riots broke out when the police responded to peaceful protests with a wall of riot gear and undue force. The building housing the 3rd Precinct, Chauvin’s precinct, was set on fire, and Mayor Jacob Frey, in perhaps the only good decision he made in a year of bad decisions, ordered the police to stand down and let it burn. History was made.
But a lot more burned besides the police station. This stretch of Minnehaha, from just north of Cub Foods to a few blocks south of Lake Street, has seen a year of dizzying change, great challenges, and sad losses—and also some groups and institutions, from established businesses, to nonprofits and churches, to spontaneous formations for mutual aid, come forth and perform lifesaving services. This will be part of the story of Minnehaha Avenue in the past year, along with the more mundane happenings. 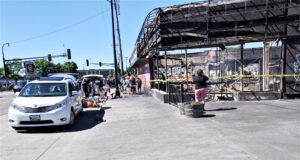 Let’s start, as we often do, with grocery stores. All three large grocery stores near the corner of Lake and Hiawatha—Cub Foods, Target and Aldi, along with the other Aldi a few blocks west on Lake Street itself—suffered enough damage and looting to close them down for many months. This caused acute distress for people who, for instance, were dependent on using local stores for their day-to-day needs. Everything in the area was closed and even the buses stopped running for about a week. Mutual aid programs sprang up almost instantly. June and most of July saw crowds of people at churches such as one mentioned below, and at sites such as the Moon Palace parking lot, where Twin Cities Democratic Socialists of America, for one, distributed food, paper products, baby formula and diapers, and even pet food.
Southside Pride published some photos in the June 2020 issue that tried to show the devastation. The entire east side of 27th Avenue was destroyed by fire, taking Gandhi Mahal and Migizi, as well as two historic buildings on either side of Lake Street, housing small restaurant businesses and more. An affordable apartment building under construction was lost.
Not all of the buildings or businesses have returned, but Target and the other two supermarkets are back. Two smaller specialty food purveyors were thankfully outside the line of fire. Not right on Minnehaha but nearby are Coastal Seafoods and United Noodles. These establishments are open for regular shopping. Sadly, the cafe in United Noodles closed, but meanwhile Coastal Seafoods, which moved from its Minnehaha Avenue location to larger quarters at 2007 East 24th Street, has added a cafe, with some very yummy offerings. You can get their website off of Google maps for online ordering. Both Coastal Seafoods and United Noodles have delivery services as well. Coastal Seafoods also has generous weekly discounts on various days. Fridays, for example, they offer 20 percent off to students, educators and health care workers. 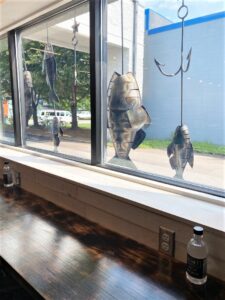 Coastal Seafoods’ new location looks out to the driveway for United Noodles.

Pharmacies can be found in the Target and Cub supermarkets. There is a Cub superstore I was using early in the uprising period at 46th Street between Minnehaha Avenue and Hiawatha. It is normally open 24 hours, but has had restricted hours through part of the pandemic year, and it has a pharmacy inside (but the prescription service is not 24 hours). There is also a Walgreens at 46th and Hiawatha that was damaged in the uprising but is now open as normal.
Farmers markets being another way to get groceries (as well as plants, and lunch), we’ll just mention that the Midtown Farmers Market was one of the earliest to return (May 1) and their Saturday markets are open now, with Tuesday markets to follow on the first Tuesday in June.

Fitness studios and other services

Fix Studio, at 3725 Minnehaha Ave., is a different kind of fitness studio from the usual. Geared toward those who want to use running and/or biking for fitness, they provide endurance coaching, classes (virtual since the pandemic), injury and sports massage, bike fitting and gait analysis, and group running and biking. Also, they have a bike shop and a coffee shop on the premises. I’m not sure what all is open for in-person services, so best to call and check.
Another service important to keeping your body looking, feeling and working its best is a spa service. Riverstone Spa at the corner of 38th and Minnehaha Avenue is a large, comfortable, all-purpose spa where you can get a haircut, mani-pedi, massage, and waxing or facial all in one place. Reservations are required to keep occupancy lower for COVID safety and they also require you to wear a mask for any service not involving the face. 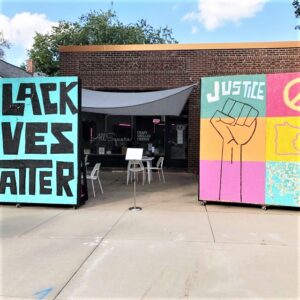 Services along Minnehaha Avenue include two beloved entertainment venues that we are happy to report made it through the past tumultuous year. This is especially a blessing in the case of the Hook and Ladder Theater & Lounge, which is right next door to the 3rd Precinct building. Although the building did sus-tain some damage and looting, it was mild enough to recover relatively quickly. The venue has been livestreaming some amazing concerts and other content. Now a stellar summer outdoor music series called Under the Canopy is just starting. A lot of the most popular shows are sold out already, but check at thehookmpls.com/ to see what’s still available.
The other entertainment venue is the Trylon Cinema. This used to be a micro-cinema, and I wonder if they could have survived had they not reconfigured into a small but normal cinema. During the pandemic, they have been seating up to 20 people in their 92-seat space. Check out www.trylon.org/ for upcoming shows. In June there will be a celebration of the late Polly Platt, a little-known production designer and screenwriter of some iconic films, including two based on novels by the late Larry McMurtry. 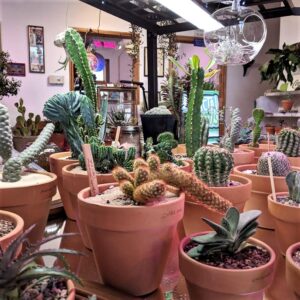 Right next to the Hook and Ladder is the Hub Bike Co-op. This is one of the most popular and trusted bike shops in town. In addition to in-store shopping and services, they also have curbside pickup and even delivery. Across Minnehaha is another type of service we don’t often cover here, but I’m going to mention it, because a friend of mine used them in a very precarious moment in her life and was very happy with the results. This is the Wilson Law Group, a small firm with a diverse portfolio of expertise, from family law to immigration to civil cases for small to medium businesses.
Another vital service, one that I have used myself, then recommended to this same friend, and she has used them a couple of times during the pandemic, is PC Doodle. They provide a range of computer services, from buying and selling reconditioned devices, to iPhone repair, to software and hardware consulting for individuals. They have reasonable terms, fully disclosed upfront.
Finally, a large-scale service many of us need from time to time, Castle Remodeling. If you’re exploring a remodel of a room or a whole house, you can visit Castle Remodeling’s website for educational videos at www.castlebri.com/homeowner-resources and then make an appointment to stop by a showroom (one of four! — their Longfellow one is at 4020 Minnehaha Ave., but they have expanded to St. Paul, Northeast Minneapolis and Diamond Lake as well) to see how things look in the real world. 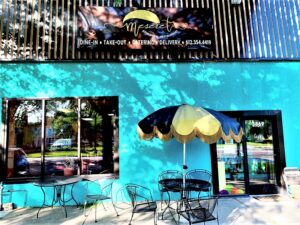 The number of antique stores along Minnehaha has shrunk a bit. Paris Apartment and E’s Emporium are still there. Conversely, game stores have increased. In addition to Heroic Goods and Games, and Dreamers’ Vault (on Hiawatha), which we have covered before, there is now Dumpster Cat Games at 44th and Minnehaha.
Moon Palace Books is still in operation. I haven’t heard if they have opened for in-store browsing yet, but they have been one of the very cautious ones, with a robust online ordering platform. You can have shipping or pick up at their books-to-go window.
Ricardo Levins Morales’s Art Studio is open, still in curbside pickup mode, since it’s pretty small. RLM’s artwork is available in all kinds of formats, from framed fine art prints, to posters, notecards, buttons, and more. Concerned in equal measure with social justice and beautiful imagery, RLM’s work is especially meaningful for the Southside (and beyond) during these times. As a testimonial on his website proclaims: “Ricardo Levins Morales is simply the single most important visual artist for progressive forces in the U.S. today, and one of the most important globally.” You can see more at www.rlmartstudio.com. Awakenings is a store selling spiritual / metaphysical items. It’s also a service in that they offer psychic and healing sessions, and also rent a space for classes, readings or other small events. Fractal cactus is a unique store, part gardening center, part florist, if you consider cacti to be flowers. In good weather, they have an indoor-outdoor shop but still limit customers, so appointments are recommended. 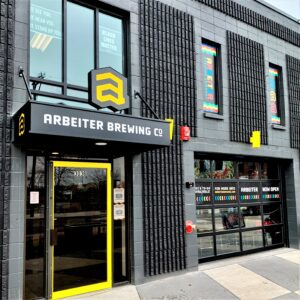 A wonderful-sounding new taproom has opened up next to Moon Palace—Arbeiter Brewing. I’m going to check it out very soon. Geek Love Cafe, inside Moon Palace, is still in pre-order (online) takeout mode. They use a pickup window, separate from Moon Palace’s. I never got a chance to check out Dripping Root, a new WOC-owned juice bar coming to 40th and Minnehaha. Their social media says it’s opening May 29. There are two very popular Ethiopian restaurants on Minnehaha. Katar River, just north of Cub Foods, serves a wide variety of mouthwatering dishes, both vegetarian and meat, including Doro Wot (chicken stew, Katar-style) and Dinich Wot (potato stew in a curry and cumin sauce) as just a couple of examples. Meseret, at 39th Street, also has glowing reviews for its Ethiopian cuisine. Both use GrubHub for delivery.
I did get to visit Wildflyer Coffee twice. This is a partnership with Peace Coffee, the previous business in this space, and a program for formerly homeless or at-risk youth, who run the current cafe. They sell their own brands of coffee in drinks, some from Peace roasters and some from Dogwood. They have a few food items and some merch as well. A very nice place, open for limited sit-down sipping and nibbling. 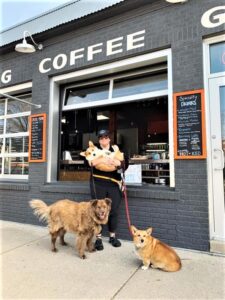 The following restaurants and eateries are also now open:

We’ll conclude with a quick look at a couple of faith communities of note. On the north half of Minnehaha, you will find a large and traditional Islamic Center with a mosque and an Islamic academy. This is Tawfiq Islamic Center (tawfiqic.org).
To circle back to the uprising, one of the mainstays of the huge mutual aid efforts sustaining people after the riots in Longfellow was Holy Trinity Lutheran Church. Already known for hosting Fare for All and many other community aid projects, at the end of May the church became nearly 12 hours a day, every day, an outlet for food distribution and minor urgent medical care. They also hosted a massive free COVID testing the first week of June, so that activists who had spent a week or so in crowds, stress and violence could see if they had also been infected. Hats off and gratitude to Holy Trinity! 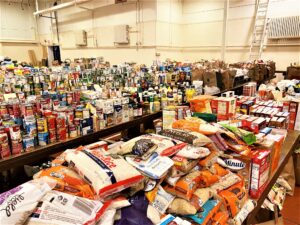 Holy Trinity was flooded with donations for their
pop-up food shelf.