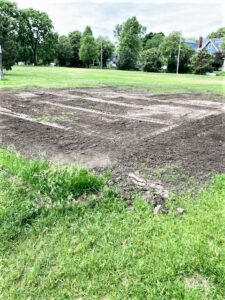 On a beautiful spring morning in mid-May I took a walk in Powderhorn Park and came upon a group of people erecting lovely raised beds and planting gardens in the northwest corner of the park. I learned that they were a group of local residents who got together to form this project. They had erected a sign that read “The People’s Garden.” They pointed out that I too could participate and benefit from the garden. I received a card in my mailbox, as did my neighbors, announcing the garden and welcoming participation. On Tuesday evening, June 1, when I returned to the park – the garden was gone. A plot of dirt remained. A small group of people were sitting in a circle talking. I asked what happened to the garden. The reply, “They took it, the city, the Park Board took it. They weren’t doing enough to serve the people, so we did what we did.”
The flyers circulating in the area about The People’s Garden (TPG) state that they are “South Minneapolis neighbors working to redistribute power and take back the land through community gardening with the goal of achieving food sovereignty.” The informational flyer goes on to point out that the project is decentralized; that is, there is no point person. They believe that while the current Park Board approach serves some people, it harms others, implying prejudice with regard to race, age and socioeconomic status.
An unidentified representative of TPG (communicating via email) stated that the Minneapolis Park and Recreation Board (MPRB) was informed of the garden the day after it was established. There was interaction between the Park Board and the gardeners which led TPG to believe that something would be worked out. While there has been much neighborhood support for the garden it seems there was a complaint by an upset neighbor which stirred action on the part of the Park Board. There was talk about working together (MPRB and TPG) to find a better location, but in the end a message was posted from the Board on May 23 instructing TPG to remove the garden. On May 25, TPG received another message from the Park Board informing them that they must remove the garden by the end of the day on May 26. The timeline was short and did not allow the gardeners to prepare and orchestrate a proper removal or move of the garden.
So, what happened to The People’s Garden?
I contacted the MPRB to inquire about TPG. They welcomed the inquiry and the opportunity to respond. MPRB relayed that they became aware of the unauthorized garden but could find no contact person with whom to discuss the matter. Because the garden did not follow MPRB’s community garden policy it was removed on June 1. The Board pointed out that community gardens are welcome and thriving and that there are 12 families/individuals working the approved Powderhorn gardens of vegetables, fruits and flowers.
MPRB “applauds TPG for their commitment to growing healthy food for the community and encourages them to apply for a future garden plot and to participate in the public engagement on a potential amendment to the Powderhorn Park master plan that would add another urban agricultural zone on the east side of the park.”
Park systems in Minnesota, as well as most states, are governed by ordinances and policies in order to manage the use of the park land, discouraging use without approval, no matter how good the intent.
MPRB adopted a community garden policy in 2018 when it became clear that the community was in favor of developing gardens. The emphasis has been on higher-density, lower-wealth neighborhoods. Thus far, six gardens have been established. Requirements for establishing a garden include:
– Applicants must apply annually so that new gardeners have a chance at a garden.
– Gardens must have a community area from which the general public can harvest.
– Gardens must provide accessible, unlocked, free access for everyone.
Note: The application process prioritizes access for those who would not otherwise have access to land for growing food.
It would seem that TPG and MPRB have similar goals: to establish community gardens for the production of healthy foods to serve the neighborhood. How they get there — that is, the process — is where the conflict lies. Can these groups with common goals and interests come together for the benefit of the community?