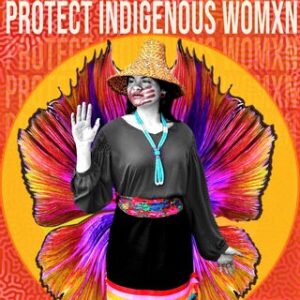 All My Relations podcast on missing and murdered
Indigenous women

Like many other inner-city neighborhoods, the four Phillips neighborhoods and the American Indian Cultural Corridor (AICC — the stretch from Cedar westward to 11th Avenue) have been through a lot this year. And yet when you walk down Franklin Avenue and look around, it looks, for the most part, busy, bright and hopeful. Businesses have reopened, new things are opening, families walk the streets and take the buses, a clinic in the strip mall offers vaccines to pre-teens and teens. Almost everywhere there are hiring notices. There are little sparks of art and beauty everywhere.
The Minneapolis American Indian Center (MAIC) has been closed, for the most part, for 14 months. The excellent and affordable eating spot, Gatherings Cafe, has spent the pandemic preparing free meals to be delivered to elders in the community. A number of major programs have been presented virtually and a large one is coming up this month.
On Thursday, June 24, in partnership with the Hook and Ladder Theater and First Nations Kitchen (a food ministry of All Saints Episcopal Indian Mission at 31st Street and Longfellow), MAIC is presenting a livestreamed two-hour event. The Summer Solstice is a free event from 6 to 8 p.m. and you can register for it here: www.facebook.com/events/491552888756197. MAIC’s youth, fitness and health activities are ongoing, even though the front doors are closed to walk-ins. MAIC also includes an art gallery, a gym and some retail outlets.
Slightly to the north and east of AICC is a Native American-developed housing project of a unique kind — Anishinabe Wakiagun. Although I still think of this institution as “new,” it’s actually turning 25 years old this year! From their website is this brief explanation of what it is: “Anishinabe Wakiagun is a culturally specific permanent supportive housing program for chronic inebriates. It is a Housing First/Harm Reduction facility that does not require residents to be sober in order to maintain their housing … The philosophy of Anishinabe Wakiagun is to reduce the public cost of providing services while at the same time providing a more stable living environment for its residents.”
If you have any doubt that providing permanent housing to this population is money-saving, the following stats are offered:
– It costs $4970 to deliver public services to one family experiencing homelessness, while it costs only $472 to $750 to prevent the family from becoming homeless.
– The cost per night of accommodation at Anishinabe Wakiagun: $20; the same night for a homeless shelter: $32; for the detox unit: $192; for jail: $363. (Note these stats are more than ten years old and all costs are much higher, but the ratios are roughly the same.)
– Anishinabe Wakiagun saves the taxpayers over $500,000 per year (again, old stats) by reducing detox admissions by 85%, ER visits by 20%, and jail bookings by 23%. 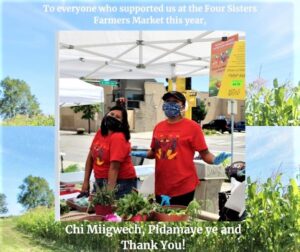 An art gallery well known and loved in the AICC is All My Relations, just two blocks west, right next to Pow Wow Grounds, the community’s central coffee shop. Speaking of Pow Wow Grounds, its parking lot is also the home of the Four Sisters Farmers Market, which just opened for the season on June 3. The market runs from June through October every Thursday. Chief among the vendors at Four Sisters is the Native American youth farming program called Dream of Wild Health. This organization has thrived and even expanded during the pandemic year.
In the next block to the west is the Franklin Library. Like most Hennepin County libraries, it was closed for several months, and was one of the first to partially reopen as a much-needed computer access point for underserved communities. Computer use was, and still is, by appointment only, to limit the occupancy of the building.
Franklin Avenue has long been known as a magnet for newly arrived immigrant populations. This gives it a lively diversity that’s not found anywhere else in the Cities to such an extent. At the turn of the 20th century over 100 years ago, it was largely Scandinavian immigrants. Two more recent groups that make up a large segment of the small business owners and patrons of businesses on the Avenue are Latino people from Mexico, Central and South America, and East Africans, principally Somalis.
You’ll see all of these kinds of people and more in Aldi, the bargain grocery store in one of three anchor buildings that make up the Franklin Circles Shopping Center, across the Avenue from the Franklin Library. This is my favorite Aldi, I think. Franklin Circles is anchored on the west side by the Ancient Traders Market building. Though originally built to house small retailers of craft-type objects, as well as a cafe, it is now more of an office building, although the legendary Maria’s Cafe still graces the building. The south edge of the shopping center consists of the Native American Community Clinic (NACC). Founded in 2003, they opened a new full-service medical and behavioral health clinic in 2018 in a building that used to house a dollar store. The clinic is a joint project of Red Lake Nation, Little Earth Residents Association, and several health care providers.
Ancient Traders Market no longer has shops selling traditional Native American crafts. Its former largest outlet, Northland Visions, relocated to Northeast Minneapolis. Current tenants of the building include a satellite office of NACC’s Behavioral Health department, a law firm, a design firm, and a huge plethora of home health care agencies. There is some lovely Native American art in the ground floor lobby. Also, notice the wolf sculpture outside in the parking lot, surrounded by a brick planter with native grasses.
The next block to the west holds the Project for Pride in Living (PPL) Learning Center, a major outpost of its jobs program, sharing the block with a Somali-owned halal grocery store, Almadina. In addition to carrying 100% halal animal products, Almadina is your go-to source for camel milk. They also have money transfer services linked to Islamic banking. (Islam has strict rules against usury and gambling, which make most worldwide banking services problematic for the faithful.) In the apartments/offices on the second story of the Almadina building there are seven more home health care agencies. This must be Phillips’ largest “growth industry.” Between the mid-block parking lot and Almadina is the Tayo Grill, a Somali sandwich shop that also has sambusas and smoothies.
In addition to the Anishinabe Wakiagun housing project mentioned above, there is a load of affordable housing, new and old, and in some cases, culturally specific, along Franklin Avenue. On the other side of the MAIC, to the west, is Many Rivers, partnered with the Mille Lacs band of Ojibwe and containing 78 units. Mino-Bimaadiziwin Multifamily Housing is a recently completed project at 21st Street and Cedar Avenue. It is a project of the Red Lake Band of Chippewa (RLBC) and contains 110 units, with a tribal Wellness Center and the Red Lake Nation Embassy on the ground floor.
Project for Pride in Living (PPL) is a nonprofit that has been on the Avenue for decades. They build housing of many types all over the Twin Cities (as well as running jobs programs) and one of their latest housing developments is the PPL Collaborative Village at Franklin and Elliot Avenues. PPL is also currently developing a new project called Anishinabe III at 1600 Franklin Avenue. 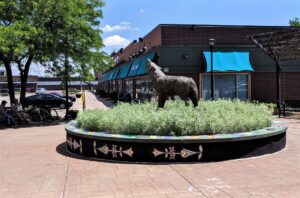 Wolf sculpture and prairie grasses in front of Ancient Traders

Even farther west is a whole corner of affordable housing projects and supportive services at Franklin and Portland. Aeon Properties’ two complexes — The Rose and The Wellstone — are on the north side across Portland from each other, and the Hope Community, Inc. complexes Children’s Village Center and The Jourdain both sit on the southeast corner.
Just west of Chicago Avenue is Columbus Avenue. People concerned with symbols of white supremacy and colonialism will be pleased to hear that there is a movement afoot, led by people of white settler ancestry in consultation with the council members from Makoce Ikikcupi, a Dakota land recovery project, to rename Columbus Avenue. The council gave the name Oyáte Avenue, Oyáte being a Dakota word meaning “the people” (pronounced “oh-YAH-tay”).
Finally, to circle back to those early 1900s immigrants, we have the pretty blue building that is Norway House. Founded in 2015, when the present building was a refurbishment of a previous retail establishment, Norway House is a 501(c)3 to promote cultural ties between Americans, especially Minnesotans with Norwegian ancestry, and modern-day Norway. The building contains a satellite shop from Lake Street’s popular Nordic gift store, Ingebretsen’s, and also a cafe, but the building is currently only open by appointment. (Hopefully that will change soon, maybe even by the time you read this!) 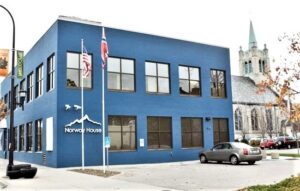 Norway House and the Norwegian Consulate with Mindekirken in the background

As nice as their building is, Norway House is still pursuing a rebuilding that will enlarge the site and include functional outdoor areas. You can see their plans on their website at www.norwayhouse.org/.While you’re there, also check out the collection of online and offline games, music, films, and recipes at Bli hjemme! (Stay home!) Norway House’s site was deliberately chosen to be adjacent to the Norwegian Lutheran Memorial Church (also called Mindekirken) at 10th Avenue and East 21st Street. They are currently offering livestreamed worship in both English and Norwegian.