Why won’t they discuss this? 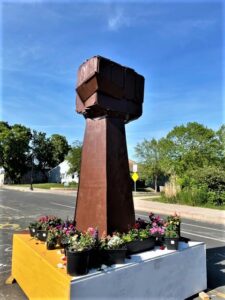 The people who have held George Floyd Square for more than a year issued the following list of 24 demands on August 7, 2020, that they believed must be met before traffic at 38th and Chicago could return to normal:
1. Recall Mike Freeman, Hennepin County Attorney.
2. Fire the following employees of the Bureau of Criminal Apprehension:
a. Drew Evans, Superintendent;
b. Dana Gotz, Deputy Superintendent of Minnesota Justice Information Services;
c. Jeff Hansen, Deputy Superintendent of Investigative Services;
d. Catherine Knutson, Deputy Superintendent of Forensic Science Services.
3. Provide accountability and transparency in the cases of Christopher Burns (2002), Courtney Williams (2004), Terrance Franklin (2013), Jamar Clark (2015), PhilandoCastile (2016), Thurman Blevins Jr. (2018), Travis Jordan (2018), Kobe Dimock-Heisler (2019), Brian J. Quinones (2019), George Floyd (2020) and any others as their families decide to speak up.
4. Open an independent investigation into the conviction of Myon Burrell.
5. Establish independent investigation and prosecution of Minneapolis law enforcement, appointed by the governor of Minnesota.
6. Require law enforcement officers to maintain private, professional liability insurance.
7. Ban the indemnification of law enforcement officers.
8. End qualified immunity.
9. Hold the trial of the four former officers charged in the murder of George Floyd in Minneapolis.
10. Invest $400,000 into the George Floyd Square Zone through the neighborhood associations to create new jobs for young people, which will help deter violence.
11. Invest $300,000 into the George Floyd Square Zone through the neighborhood associations to provide Undoing Racism training for the Black community provided by thePeople’s Institute for Survival and Beyond.
12. Adopt and implement the 2019 Livability and Safety Platform Proposal submitted by the South Minneapolis Public Safety Coalition to the City Council.
13. Allocate funds for integrative health services to support residents of the George Floyd Square Zone through the ReCAST grant managed by the Division of Race & Equity.
14. Establish a moratorium on property tax increases for residents of the George Floyd Square Zone for two years.
15. Include a rent-to-own option in new housing construction for renters.
16. Allocate a facade grant to George Floyd Square to improve the aesthetics of the business corridor.
17. Establish and distribute a contingency fund for Black, Indigenous, and people of color (BIPOC) businesses located in George Floyd Square according to the needs of each business owner, not their landlords, to ensure the preservation of Black-owned businesses and promote race equity.
18. Provide Agape Movement a space for their operations within the George Floyd Square Zone.
19. Gift 612 M*A*S*H a blood bank bus or a coach bus to continue care for anyone who enters the memorial site during the winter months.
20. Release the death certificate of Dameon “Murphy Ranks” Chambers.
21. Open and complete an investigation of the murder of Dameon “Murphy Ranks” Chambers.
22. Hold law enforcement accountable for impeding EMS response and the mishandling and delay of Dameon “Murphy Ranks” Chambers case within the zone.
23. Drop the charges against non-violent protesters from 2016-17.
24. Continue the closure of the intersection of 38th Street East and Chicago Avenue South until after trial of the four officers charged for the murder of George Floyd.
The city has refused to dignify the struggle and sacrifice of the people who have fought for justice by answering their demands or even seriously discussing them.
Now, the city is bent on tearing down their barricades and opening the street to business as usual. They have issued meaningless statements, dripping with fake sincerity:
“The City’s three guiding principles for the reconnection of 38th and Chicago have been community safety, racial healing and economic stability and development for Black, Indigenous, Latinx, Asian and other communities of color. We are collectively committed to establishing a permanent memorial at the intersection, preserving the artwork, and making the area an enduring space for racial healing.”
Why won’t they discuss the 24 demands? Why won’t they listen and take seriously a community’s cry for justice? Black Lives Matter more than business as usual!