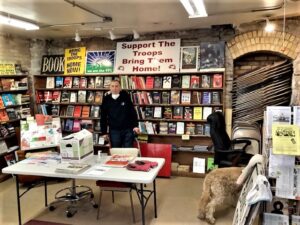 “Loneliness does not come from having no people about one, but from being unable to communicate the things that seem important to oneself, or from holding certain views which others find inadmissible.”
— Carl Jung

Underground writers have found ways to circulate reading material since the 17th century. In the U.S., many outlets that openly distributed this work are now closed. MayDay Books, located next to the University of Minnesota on the West Bank of Minneapolis remains open, part-time.
For over 30 years, this store has helped keep the neighborhood’s bohemian tradition alive by providing a space where contrarian thinkers can find out-of-the-mainstream books and periodicals. Equipped with tables, comfortable chairs and free coffee, MayDay is an unofficial headquarters for area lefties seeking political/literary events or activists looking for a warm basement to hold meetings and make protest signs. Craig Palmer has volunteered at MayDay (in various locations – at one point in what was to become the offices of Southside Pride) for over 41 years and jokingly refers to it as “my bunker.”
Before he became interested in politics, Palmer worked as a heavy vehicle operator for two years in a combat engineer battalion attached to the 101st Airborne Division west of the city of Hue in Vietnam. He was the only person in his company with a high school diploma and was called “the professor” by the company clerk.
Palmer’s job was to build and maintain roads that connected fire bases. He saw a lot of soldiers wearing helmets with “When I die, bury me face down so the world can kiss my ass” written on them. He spent sleepless nights in underground bunkers, commenting, “the enemy owned the night.” Days weren’t any better: there were snakes, bugs and lousy weather along with the dangers of loading and unloading heavy equipment or feeling the ground shake during bombing campaigns. Beer and marijuana seemed to soothe his nerves, but it was the camaraderie he shared with his buddies that pulled him through.
Palmer was discharged and returned to St. Paul in 1970. Making the switch back to civilian life was difficult. He was emotionally mangled from war and things were not good at home. Although he now believed the Vietnam War was wrong, he was drinking heavily, and it wasn’t long before his parents told his siblings to stay away from him. Feeling alienated and, at times, suicidal, he sought solace with other vets or workaday guys who were into cars and bought cheap beer by the case. He stopped believing in the “Buick-by-the-breezeway American dream” and used money from his five-dollar-an-hour job to buy a house so he and his new friends would have a place to party. He was pleased he’d found a new gang that understood him and “I still had enough money left over to eat out all the time,” quipped Palmer. 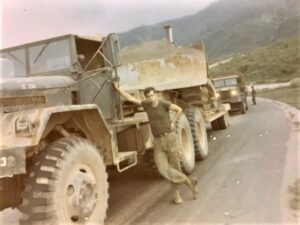 He drifted into the West Bank taverns later in the ‘70s and began talking with counterculture types and barstool revolutionaries who were also experimenting with beer … on a regular basis. He enjoyed those conversations and took more of an interest in progressive ideas and recalled influential chats with longtime activist and Irish dance instructor Mike Whalen, whom he met at MayDay about 40 years ago when it was located on Franklin Avenue in Minneapolis.
Whalen remembered the old bookstore as a socialistic, diverse organization that was “cold and had rats” and Palmer as a smart, quiet fellow who didn’t say much but when he did, “it was the right thing.” Palmer estimates that over half of the new store customers still identify as socialists and believes it’s anyone’s guess who might walk in next.
He mentioned being surprised by a former Chilean palace guard for Augusto Pinochet who stopped in five years ago and delivered a long-winded polemic about communism and American culpability. And he was surprised recently by two national guardsmen in full combat gear who claimed they were socialists and bought an armload of books this spring during the murder trial of former Minneapolis police officer Derek Chauvin.
While the store remains a nonprofit, volunteer-run cooperative, Palmer is the information linchpin that customers usually go to because he’s the one who shows up for work nearly every day. So, on any given workday, he might field questions that go back and forth between Marxism, political actions or the whereabouts of area potluck fundraisers, and connecting the dots for customers that mark and measure subversive ideas.
And, he knows books. Few know content differences between old and new copies of “The Anarchist Cookbook,” but he does. “That was a rotten book written by a right-winger with unreliable recipes,” said Palmer, emphatically adding that the core of MayDay revolves around anti-war and anti-capitalism – not mad bombers. Those with an interest in a book entitled “How to Blow Up a Pipeline,” published in 2021, might be referred to military surplus stores to browse through old government manuals. Community outreach can work in mysterious ways.
Palmer with his characteristic ethos let me know before the end of the interview that this story wasn’t just about him and rattled off a long list of names, including deceased activist Tom Dooley, before pointing to a photograph of Earl Balfour, who was also a store volunteer and dedicated union advocate.
Having lived as a simple-lifer who hasn’t driven since 1991, Palmer figures his worldly possessions will fill up about half a dumpster after he’s gone. Until then, he plans on holding down the fort with like-minded friends in the cozy sanctuary that continues to boast “NOT MAKING A PROFIT SINCE 1975.”