The Dish – a takeaway, a trip to the mall, and a vision of the future 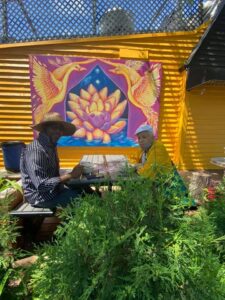 Where I get information about restaurants
In case you wonder where I get information about restaurants, either to pass on news of the restaurant world here or to decide what to review next, I mostly get it from the same place I get a lot of my information – internet-based media. Not social media, but either online outlets of magazines and journals, or wholly online publications. One of the most important currently is The Eater. They have city or regional-based sub-sections, and they also can send you an email newsletter if, like me, you love having a cluttered and overfull inbox.
Rather than using it as a source, I’ll just share with you a recent piece I read there about the ten essential restaurants and one food hub for Mexican food along south Minneapolis’s Lake Street. (Two of them are taqueria/cafés inside grocery stores and one is a food truck, so really only seven. twincities.eater.com/maps/best-mexican-restaurants-east-lake-street-minneapolis) You can find this piece and much more about the Twin Cities restaurant scene at twincities.eater.com.
Another major source I use is the Minneapolis-St. Paul Business Journal. This is a high-priced physical weekly paper, and though it publishes online too, the online articles are only available to paper subscribers. Here I learn about openings, closings, the careers of chefs, business-related things like unionization or impending bankruptcy, and general food news. This has been super useful during the pandemic 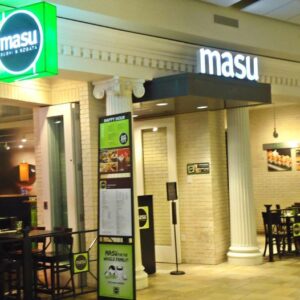 Masu Sushi and Robata at the Mall of America

and uprising.
I also get lighter, almost gossipy news there, like what’s new at the 2021 Minnesota State Fair. Bison ravioli bites, for one thing. At least three Midtown Global Market vendors will have State Fair offerings. Hot Indian is selling a Kerala Chicken Kati Roll or Paneer Pakora. Andy’s Garage is offering a sort of vegan corn dog, where the “dog” is a chipotle from Herbivorous Butcher, or a bacon cheeseburger on a sweet waffle. Los Ocampo will offer esquites, a sort of off-the-cob version of elotes.

A few minor adjustments from last issue
Of three new restaurants I mentioned in the June issue, two have actually not opened yet even though normally reliable sources said they had, and the third – well, it’s complicated. The first one – Mason’s Famous Lobster Roll at the Mall of America – is listed in the Mall’s own directory as “Coming Soon,” not open, as several newspapers said.
Infused Life (in the old A Cupcake Social space) looks open but actually isn’t … quite. I spoke to the proprietor when she saw me peering quizzically through her front window. You would think I was peeping at her house instead of just legitimately trying to figure out what’s going on with a public eatery. Anyway, she said they would be “open soon.” Which is what the sign at the old Midtown Global Market said several months ago. I don’t know what to tell you. Their products were great, so I hope they manage to open. Soon. Actually.
The last one is kind of up and down. It’s A Dripping Root, a shop selling all raw and vegan juices and smoothies. I drove past their opening on the announced opening day of May 29, and there was a massive line. So they definitely were open on time and with a great response. A few weeks later there was a news item that someone had vandalized the business and it was temporarily closed. And just this past weekend, there was a news item that it had reopened and after a short while was vandalized a second time. This is disturbing. I will try to keep on top of it.

Tiny Diner may be changing
There is a move afoot to create a community-owned (and hopefully also worker-owned) co-op for Tiny Diner’s future. This writer has been in communication with Kim Bartmann and also Ixchel Mc-
Kinnie, who does Enterprise Development for Social Impact Strategies Group (SISG) and is now heading up the Bartmann Group’s project to explore and hopefully activate a conversion of the business to a cooperative.
McKinnie gave me some background on the project and how it came about. Bartmann is not at, but is approaching, an age where she may want to step out of the role of restaurant owner. She contacted the CEO of SISG, Elaine Rasmussen, who is also a board member of the Nexus Group. The Nexus Group has a mission of helping communities of color and other disadvantaged communities build community wealth and stable environments. One path to that goal which they promote is community cooperatives and worker ownership. SISG has a closely aligned mission. That was how McKinnie came to manage the project.
The project is still in an early stage. If you want to be part of the early process to build this, you can get on the mailing list by visiting socialimpactnow-2570242.hs-sites.com/tiny-diner-cooperative-interest and signing up there. Mc-
Kinnie has been working three months on the project, which has had two community meetings, one virtual and one in person. They will continue to offer information sessions and start to build the steering community, the group which will do the work to determine the feasibility of forming a cooperative, create a business plan, and make recommendations for the cooperative structure.
McKinnie told me: “Kim thinks Tiny Diner is the perfect restaurant to convert to a co-op. Located just a few blocks from George Floyd Square, I can’t think of a better place to be in the hands of the community, as a black woman. Located close to four neighborhoods (Powderhorn, Central, Bancroft and Bryant), we hope that membership reflects the rich diversity of those communities. Ultimately those who show up and want to participate will define the community.”
The exact timeline is still to be planned, but typically it takes about 18 months or more to establish a cooperative. McKinnie hopes that the plan will include the property as well as the business, will also be highly inclusive of and attractive to BIPOC and LGBT+ communities, and will have a part-ownership role for workers.

Other things to look forward to
– The Minnesota State Fair.
– Still looking forward to The Sioux Chef’s restaurant in the new riverside park near St. Anthony Falls.
– Trying to decide which of several fabulous-sounding new (to me) restaurants to visit in person and review in August.
– Summer has hardly started and I’m already looking forward to fall!

Actual sitting-in-a-restaurant-dining mini-review – Masu Sushi & Robata (Mall of America)
I went to the Mall and all I had was some sushi. Actually, I had some sushi (sake, which is salmon, not rice wine) and also a real seaweed salad and a side called burokkori, which is charred broccoli with togarishi glaze. I also had a non-alcoholic cocktail called Singing Mountain, made of green tea and rhubarb syrup. The only slight disappointment was the burokkori. I love broccoli, so this is hard to completely mess up, but it was both undercooked and under-seasoned in my opinion. And I am someone who usually considers vegetables overcooked and over-seasoned.

Take-out review – Curry in a Hurry via Bite Squad
I used Bite Squad to order a very basic meal from Curry in a Hurry. I got a mango lassi, which was large and perfect. I got a basic lunch bowl of vegetable curry. It was a little overcooked, I think, and a high rice-to-curry ratio. I initially ordered a pakora as the free side, then changed my mind and changed it to a plain naan (before I hit “Place Order”). But even though the receipt and the bag said “naan,” I got a pakora. Maybe it was Bite Squad’s software’s fault. Who knows? It was still good (the pakora, that is). I also got a single lentil samosa, which was only $3. I am still eating leftover curry two days later, so I have to say, Curry in a Hurry gets 10 out of 10 for “value for money.” And a 10 for the lassi, and an 8.5 for the curry, so it averages out to a 9.