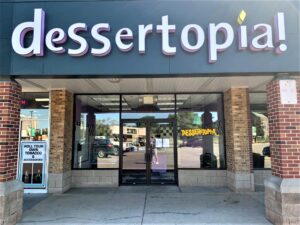 Dessertopia is a new bakery at the Hub shopping center.

There has not been as much change in the past year on 66th Street as we have experienced in South Minneapolis. One or two small businesses have moved to new locations here. A few have closed; it’s not clear if it was the pandemic or just normal business rhythms. This has not historically been one of the places I frequent, but I have been there a few times during the pandemic. I bought a new kitchen faucet from the Home Depot. I checked out the Walgreens at the Hub shopping center, during the time when all the nearby pharmacies were closed. I accompanied a friend to Southdale Medical Center, and we had pizza at Pizza Luce afterwards.
This east-west street is dotted with small shopping hubs, one of which is just called The Hub. There are businesses not held in hubs, too, a lot of them. Services, retail stores, and restaurants are plentiful. There is also a major Richfield city park along 66th Street, about which more later. 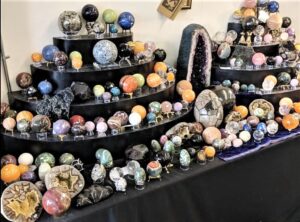 At our (Minneapolis’s) end of 66th Street, you can access it from Cedar, sort of. But it’s confusing. A couple of blocks after Cedar crosses Lake Nokomis Parkway, it splits into the highway part (MN 77) and the “old Cedar” part, that goes by Dios Habla Hoy Church and the 5-8 Club (the rival Juicy Lucy innovator). Go on the old, smaller part of “old Cedar” until it improbably crosses Bloomington Avenue, a left-only turn. Take this; a little farther on, it changes its name to Richfield Parkway. The relatively new shopping center will be on your left, although some of the little satellite businesses may be on the right or in the parking lot. This contains Home Depot, Target, Chipotle, Caribou Coffee, Noodles & Company, Hawaii Poke Bowl, a dentist, a fitness center, an Erik’s Bike and Board shop, and several other businesses. The strip mall is accessed from Richfield Parkway. Continue on southward a block to the big roundabout for 66th Street. 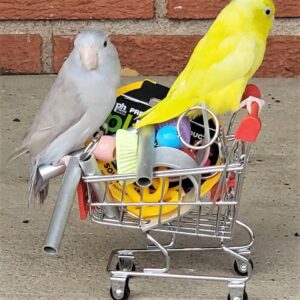 Parrotlets on a shopping spree

Heading westward towards the next major intersection, with Portland, you will pass a couple of interesting businesses sharing a parking lot, a detached mini mall, perhaps. Last year I mentioned an established business, the Adom African Market, and its newer neighbor, Egyptian Parrot Pet Shop. Well, they’re both still there, and now they share the “mall,” since June 2021, with an established business that moved there: Enchanted Rock Garden. This business arose from the synergistic partnership of a mineralogist/rock collector and a spiritually focused crystal enthusiast and healer.
Stretching from 11th Avenue to Portland Avenue along the north side of 66th Street, and northward up to the Crosstown Highway, is Veterans Park, Richfield. This park is very multipurpose. On the map it shows two small “lakes,” but these are shallow ponds, part of the wetland nature of the park as a whole. Besides a Veterans Memorial in the park, there is one other feature that identifies this park with veterans. There is a square cutout of the southwest corner of the park that contains the Richfield Ice Arena and the Richfield Outdoor Pool. It also contains two buildings not owned by the city – a funeral home, and a 64-year-old American Legion Post. (The American Legion post itself is much older, the 64 years is the building’s age.)

This building has been closed to the public, and its bar, restaurant and dance hall have suspended their operations, since January 2020. The Post, Minneapolis-Richfield Post 435, is hoping to sell the building for demolition and replacement, if possible, with a space for them in the new structure. How this will work out is partly due to what buyers and developers propose, and what if any of these propositions suit the city of Richfield. The outlook is pretty good for the American Legion Post, because Richfield wants to keep a presence of veterans, since it IS Veterans Park.
At one time Post 435 was the largest in Minnesota (it is still the second largest). Membership across the country has declined somewhat. The current largest in the country, with over 6,600 members, is some two to three thousand members smaller than Post 435 was at its prime. The current Post membership is less than a thousand. That’s still pretty big, and ought to be enough to support a rented hall with a bar and a contracted provider of food and a few offices. But not enough to support an antiquated 19,000-square-foot building, a full-time bar and restaurant, plus with back taxes and utilities to pay. We’ll watch this space and see what – ahem – develops.
Another thing Veterans Park does is to host the Richfield Farmers Market. This farmers market, part of the Minnesota Grown network, is open every Saturday morning from mid-May to mid-October. They accept FMNP, EBT, Market Bucks and debit/credit cards. The market is located at 64th and Portland, under the all-weather picnic pavilion, and is also accessible by the Route 5 Metro Transit bus.
There are roundabouts at four major points on 66th Street, and each one has a shopping center or large strip mall plus other small businesses clustered round it. The first one is Bloomington/Richfield Parkway and the next is Portland. After that we come to the roundabout and large strip mall called The Hub at Nicollet Avenue and 66th Street. The Hub is looking more and more forlorn. It has been declining since at least the 1980s (its peak was possibly when it first opened in the late 1950s). The closing of Rainbow Foods, the second to last one to close in 2018, had a huge impact. 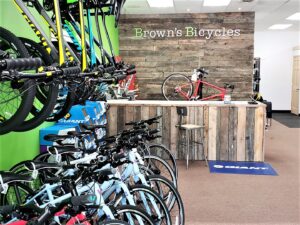 But despite that, new small businesses do open up there. I suppose Michael’s, a chain of arts and craft supply stores, is the anchor tenant now. Less than two months ago, a bakery called Dessertopia opened up there, in a former Little Caesars Pizza spot. This is the first brick-and-mortar outing of Ebony Turner, a person whose cooking and baking I know because before the pandemic she was using the commercial(-ish) kitchen at Walker Church, and also cooking their free Tuesday community meals. And don’t forget to stop in at Hot Comics, a longtime favorite store for new and collectible comic books as well as comic-related toys, games, and action figures, both new and vintage. They even have a subscription service, so you’ll never miss the latest installment of your must-have comics. If you can’t find what you’re looking for, just ask their friendly staff, who will check stock at two other Hot Comics locations, or even help you locate it elsewhere. The Hub also has a Walgreens and a small Mexican restaurant, among other businesses.
The next and (I think) last roundabout in Richfield is at 66th and Lyndale. Things are getting more upscale at this point. The Pizza Luce there is nice, and you can eat inside or on the patio. It’s actually a tad west of the roundabout, at 800 W. 66th St. The Woodlake Nature Center, which we have covered before, is across the road. 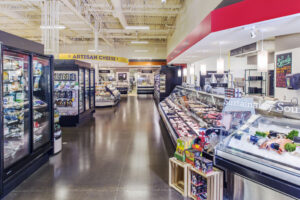 A couple blocks north on Lyndale is Lakewinds Food Co-op, or at least the South Minneapolis-Richfield branch of it. (There are two or three more, in western suburbs.) This is a very large, prosperous, and growing food co-op. It’s nice, I’ve shopped there. And there is a lot of housing development grown up around there, which probably has a feedback effect, making the co-op grow even more.
We’re heading toward Southdale now, which is out of Richfield and into the even more posh suburb of Edina. There are numerous businesses and services along this route. One that looks worth mentioning is Brown’s Bicycles, between Penn and Quentin Avenues on 66th. I like their philosophy. The website says: “We want to help create cyclists for life. To that purpose, we offer complimentary fit services on all new bike purchases, inexpensive service policies that cover the service on your bike for years, as well as quick turnaround on repairs.” 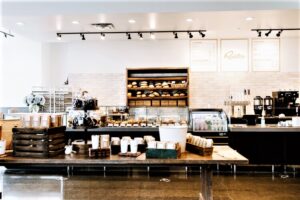 Southdale Mall is getting pretty old now, but its businesses are up to date and business is good overall. And here’s great news for movie lovers: the AMC theatre there is reopened! The shopping center stretches from York Avenue to France Avenue, and from 66th Street to 69th Street. South of it is the even posher Galleria Shopping Center, and also the Southdale Branch of the Hennepin County Library system, one of my favorite libraries.
The food offerings at Southdale are a cut above a lot of mall eateries, with a People’s Organic and Rustica Bakery and a sushi place and a Shake Shack out in the parking lot. Health or health-adjacent services are there too – a Lifetime Fitness, a Juut and an Aveda, plus two chain opticians. And you thought Southdale was just about sports gear and fashion.