Publishing the truth is not a crime 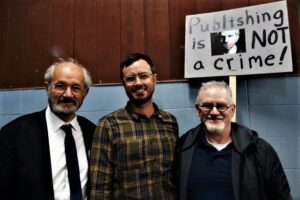 Independence Day reminds us of the democratic leap forward made by an audacious set of colonies to free themselves from the rule of the king. The Bill of Rights of the Constitution insisted on freedom of the press and prohibits indefinite detention and cruel and unusual punishment. Two Australian family members of Julian Assange came to our area June 21 to remind us of that if we don’t protect those rights, the rest of the world will suffer.
Southside-based organizations and citizens, including Women Against Military Madness, Veterans for Peace, and Tackling Torture at the Top, hosted John and Gabriel Shipton as they schlep across the U.S. to highlight the treatment of their son and brother. (Video at https://assangedefense.org/tour/#minneapolis. See also statements of support by Daniel Ellsberg https://www.youtube.com/watch?v=cMIwLlrY8Ao&t=13s and Roger Waters https://www.youtube.com/watch?v=vw6LodTOzII).
Assange was the mastermind behind the transparency-engine Wikileaks as it made available tremendous disclosures of malfeasances of governments ten years ago. Citizens around the world learned of truths about their governments and demanded changes. (The resulting uprising in Tunisia received the Nobel Peace Prize.) The Iraq War Logs, Afghan War Diary, and Guantanamo Bay releases, however, told the truth about U.S. war lies, crimes and torture. In response, the U.S. attacked Assange in ways official and unofficial.
Not only has Assange lost his personal freedom for the last ten years and suffered what the U.N. deems as torture, but journalism around the world has been chilled, as told by the Shiptons and panelists at their local events.
Moderating the outdoor venue was Time magazine Person of the Year and former FBI whistleblower and Minnesota congressional candidate, Coleen Rowley. She urged the crowd to call the Department of Justice (DOJ) to affirm our right to a free press and dismiss charges against Assange. The DOJ comment line is (202) 353-1555, for civil and constitutional rights, press 1. Rowley also urged the public to contact our congresspeople to tell them we’re urging Assange’s freedom.
A British court is holding Assange in a maximum-security prison without bail in anticipation that the U.S. will appeal their judge’s January decision to not extradite Assange to face U.S. charges of violating the 1917 Espionage Act. The Espionage Act prohibits defendants from explaining their intentions and could result in a sentence of 175 years. Astoundingly, the British judge rejected the U.S. request for extradition on the grounds that U.S. prison conditions could be expected to result in Assange’s death by suicide (a clear condemnation of the U.S. prison system.) So effectively, Assange is experiencing indefinite detention, or “punishment by process,” as the Shiptons described it, with nary a day in court on the actual charges.
Assange is allowed only one ten-minute phone call a day with his father. Rowley skewered what she called the common misbelief that government secrecy protects citizens, pointing out that the 9/11 skyjackings and destruction could have been prevented if she and her colleague’s attempts to get appropriate authorities to act had been heeded. (https://www.latimes.com/archives/la-xpm2010-oct-15-la-oe-rowley-wikileaks-20101015-story.html)
The Shiptons noted that Wikileaks’ revelations have also resulted in the eventual stopping of the wars in Iraq and Afghanistan, and the release of prisoners at Guantanamo. The crowd of 100 appreciated the new term suggested for such significant leaks: “revelations for democracy and security.”
Top editors of major media, like The Washington Post and The New York Times, have expressed concern over press freedom and the silencing effect of charging Assange with espionage by publishing truths that the government would prefer to hide. This chilling also affects potential revealers for democracy and security – insiders seeking to bring needed attention to fraud and lies.
What’s the point of taking such great personal risk if the material is not going to be published anyway? And Russia has rejected criticism of their treatment of Alexei Navalny since they say that the U.S. also puts journalists like Assange in jail. Two Australians traveled to our area to remind us that Americans revolted against a legal system where merely contradicting the word of the king was considered treason, and the press was censored. They noted that it was our independence leader, Thomas Jefferson, who wrote that if forced to choose, he would prefer a free press without a government to a government without a free press.