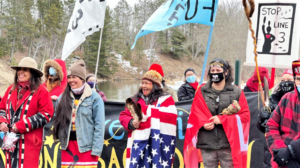 On July 15, I attended the Women for the River’s Rally at Shell River Campground in Shell City in Wadena County, Minn., where Winona LaDuke and her organization Honor the Earth have been camped since the beginning of summer. All people were invited to participate in a peaceful rally/ceremony at the campsite to stop the Canadian multinational company Enbridge from continuing construction of the Line 3 pipeline. Enbridge wants the pipeline to go under the Shell River and potentially cross the river five times. The company has already cut down miles of forest in preparation for laying the pipeline. Much has been written about the dangers of the tar sands pollution and the risk it poses. We already have evidence of the effect of the pipeline spills; we already know they leak. Even more egregious, the pipeline was approved without the Army Corps of Engineers doing a proper environmental impact statement (stopline3.org).
I saw the meandering, pristine Shell River where endangered mussels still live. Due to the drought, the water level is low, but it is clear. I listened to the speakers from the many camps set up by Anishinaabe Water Protectors. I saw the youth on horseback ride through the river and the canoeists paddle to the rally/ceremony on the bank of the river. I heard the drums and songs of the Anishinaabe. I saw the police officers positioned on the easement. It was a peaceful protest. That day, five water protectors were arrested for trespassing on Enbridge property.
In the pamphlet written by Winona LaDuke, “Welcome to the 1855 Treaty Territory,” LaDuke summarizes the threat of the pipeline:
“The proposed Line 3 crosses eight major rivers more than once which include the total of 67 watersheds: creeks, streams and wild rice watersheds in the 1855 Treaty territory – from the Clearwater to the Mississippi putting wild rice, fish, clams and life at risk … “
In addition to polluting our drinking water and destroying forestland and animal life, the pipelines threaten the waterways where wild rice grows. Wild rice is an important part of the Anishinaabe culture and economy.
In 1999, the U.S. government reaffirmed the treaty rights for gathering wild rice:
“Treaty resource agreements have been negotiated with Michigan, Wisconsin, and Minnesota after federal court orders which recognized the off-reservation treaty right of the Anishinaabe, most recently the 1999 Mille Lacs decision.” (1885 TreatyAuthority.org as quoted by Winona LaDuke in “Welcome to the 1855 Treaty Territory.”)
The Anishinaabe are fighting for the protection of the water and the land. This is all our fight. We need to honor the treaties and listen to the Anishinaabe. It would be a first step towards saving the Earth. 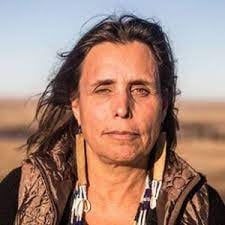 Winona LaDuke’s interview in the New York Times this weekend rings true.  I urge you to read it.
Excerpts of which read, “Do you remember that Donald Trump came to Bemidji, Minn., on his campaign? He didn’t come to see the Indians. He came to see the white people who live here. There’s a lot of non-Indian people who hate us. There’s non-Indian people who live on the reservation who put signs up to support Line 3 that are nowhere near Line 3. They just put them up because they hate Indians. . .
Indian-hating is about these people living on stolen land. To justify the theft of land you have to make us less. That’s the dehumanization that we have been facing. Our land is held by federal, state and county governments and large non-Indian landowners. Indian-hating is a practice of the Deep North. . .
Why do we get the last tar-sands pipeline, Joe? It’s kind of like when John Kerry went and testified to Congress against the Vietnam War and said, Who’s going to tell that soldier that he’s the last one to die for a bad war? Who’s going to tell those Ojibwes that they’re the last ones to be destroyed for a bad tar-sands pipeline? What’s right about this?
I organized people to vote for Biden. I drove people to the polls through seas of Trump signs. I drove Indian people to vote who hadn’t voted in 20 years. And what did we get from Joe? A pipeline shoved down our throats. . .
What I want is, I want white people to quit being white people. White is a social construct. I want them to know who the hell they are, and I want them to be not a patriot to a flag but a patriot to a land. That’s what I want. The transience of white people has put us in this situation where they don’t even know who they are, where they come from; the idea that I’m just going to keep moving to greener pastures. . .
What happened to community and place? I want people to find something and take care of it. I want them to let go of their white privilege and be good humans. We need to address these things, and some people are not going to get it. I’m hoping those people still get that they want to be able to drink the water. Even if you’re a Proud Boy, you need the water.”
Full interview: https://www.nytimes.com/…/winona-laduke-interview.html...
Martin KellerScotty HeroldBob TrenchJim WalshSara BootsKeri PickettWinona LaDukeDavid HuckfeltDave LogsdonKaesha BalochMarian MooreKeri PickettKevin BrownKevin BottJim WalshKristi Tell MillerRon Miles