The problem with the airport

The “MSP airport noise problem” isn’t a real problem as much as it is a sign the airport is at the center of life-threatening health and safety problems.
An apt health analogy is that hearing airport noise is like seeing the light from a forest fire on the other side a mountain, or smelling the smoke from a forest fire, or choking or damaging your lungs. The safety analogy: Will the fire be controlled and extinguished? 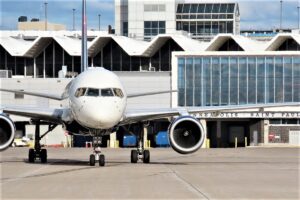 The cause of the real, actual, and unnecessary health and safety problems is hidden by “blowing smoke.” That is, the pervasive industry insistence that the fire is safely distant and under control even though you can see and hear signs it isn’t. More here than anywhere, because the airport is not behind a mountain – out of hearing, unseen – but next door in a too small, too urban place.
The air pollution problem is hidden by a mountain ofpropaganda. The expensive “noise-mitigation” program is a sham display paid for by federal re-appropriation of the revenue collected per trip from air travelers. It is analogous to false reports that the fire (safety) is nearly contained, and the pollution (smoke) will dissipate.
In 2010, the World Health Organization warned that MSP airport was, apparently, increasing health and mortality risks in neighborhoods within 10 miles of its borders. The aviation industry was addressing 9/11 and the financial crisis with the FAA and airports, including air traffic control (ATC) development (Next Gen). The MAC chair, confident that noise had been contained here, told us that the warning was not applicable to MSP overflights.
Later in 2010, two aircraft nearly collided in midair over Richfield after takeoff, an air traffic control tower error. The tower manager immediately applied changes to procedures in the tower, increased ATC tower staffing minimums, and revised the Runway Use Plan.
Now, the important thing is who and what unnecessarily make air travel an unfair burden, here, especially, and nationally. The safety fire remains burning and has delayed agreement on safe peak hour operations and routes at MSP for 11 years. Talking with MAC Chair Rick King, we recently requested a discussion of the public health and safety risks with the full commission.