New beginnings for In the Heart of the Beast 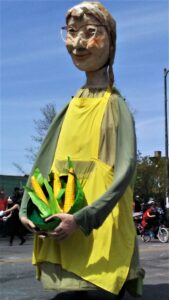 Over 45 years ago, several of us from the Alive and Trucking Theater gathered in a small apartment in Phillips. We were called by Sandy Spieler and Ray St. Louis to discuss a vision. They believed that regular festivals helped make communities strong, and that South Minneapolis needed one. They suggested May Day, as it was celebrated around the world. They envisioned theater, puppets, stilt walkers, music, a parade, and a day of celebration. We agreed to help. We juggled in the parade, set up a portable stage, performed, enjoyed our neighbors. The war in Vietnam had finally ended, and we were awestruck by the beauty of the Powderhorn Puppet and Mask theater (later changing its name to In the Heart of the Beast Puppet and Mask Theatre, because some people confused the name with the implement used to load old muskets).
We continued to participate for several years as the festival grew and fulfilled the vision of its founders. It became a celebration of spring, of our community, of seeing people whom we had not seen all winter, dancing, and supporting our local artists as they made puppet sculptures, wrote and performed visions, and helped us appreciate the time, the place, the land and our city. For decades the Heart of the Beast theater inspired, taught and grounded me. The annual MayDay parade and festival became one of the rituals that linked me with the culture of my home.
Then, the power and the beauty of the event began to draw crowds from out of the Southside. The event started to attract tens of thousands of people – I have heard counts as 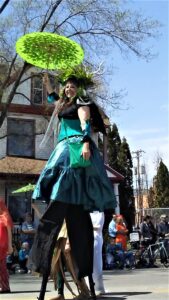 high as 70,000 people in Powderhorn Park at the 2018 festival. This became a management effort that could not be sustained by the hard-working community members of the theater. The problems of racism, tokenism, and exploitation of workers were unsolved, in spite of honest efforts. Workers complained about being overworked, underpaid and overwhelmed. The theater decided it was beyond its capability to continue to produce MayDay. Then the pandemic hit, and our community’s isolation and poverty became oppressive as the park became a huge homeless encampment, plagued with violence and crime.
A council was formed that was charged with defining the future of the theater and MayDay. After two years of deliberations, we have been informed of the decision. They are going to sell the building, stop the rental of the storage space, do smaller decentralized festivals and, we are told, might consider changing the name. Isolation begets isolation.
I spoke to Sandy Spieler, laid off from the theater and not a party to this decision about her life’s work, about her reaction. Right now she is concerned about the dispersal and home for the 45 years of puppets that have been stored in the warehouse. These are marvelous pieces of art, sculptures made by community artists to give us ritual, grounding and inspiration. They deserve to be displayed in a museum, but the time is short to find them a home. Some of them are still being used, others are simply precious. Sandy is helping to find homes for as many as possible.
We talked about the building. She remembers what a struggle, what an investment, what a 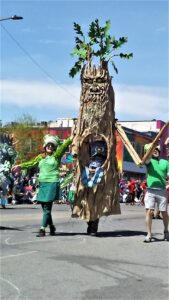 leap of faith in the community it was to purchase the building. The years of paying the mortgage and managing the building. It has meant a lot, but in the end it’s just a building; if it cannot be supported we must endure yet another loss.
Change is sometimes hard.
Our generation must support the visions and energy of new generations as they try to meet the needs of the community as they see them, within the resources they believe they can muster.
I think the challenge to the council is to recognize and define the spirit, the strength and the need that was centered at the heart of MayDay and identify the spirit, vision and purpose to what this becomes. What builds purpose, intention and community connection. What is the legacy of these 45 years and how will that give direction to what is built next.