The ups and downs of Selby Avenue 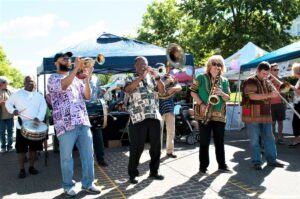 Selby Avenue’s hilly, bumpy history
When Selby Avenue was first named on a map, in 1854, the site of the present Cathedral of Saint Paul (the fourth and final one to bear that name) was occupied by a 40-acre farm belonging to Jeremiah Selby. This land, and the new avenue to access it from the west, were considered inaccessible from the east, from downtown St. Paul. This was due to the steep grade leading up the river bluff. In 1887 a steam-powered cable car was built that ran from downtown St. Paul, up that crazy hill, and along Selby Avenue to St. Albans. This is when the avenue’s fortunes began to rise.
In the 1890s, cable cars and horse-powered transit began to be replaced with electrified streetcars. The 16% grade of the hill was a problem for a while. Using a complex system of counterweights, they were able to crawl up the hill, making the journey a very slow one. Then, according to Wikipedia: 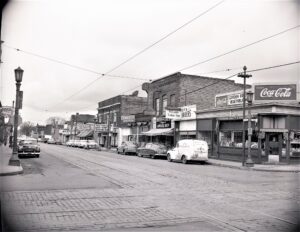 The Twin City Rapid Transit Company built a 1500-foot tunnel that changed the grade to 7%. The tunnel is 15 feet high and 23 feet across. The tunnel entrance at the base of the hill is still visible and has been sealed closed. Construction of the tunnel significantly decreased travel time and caused a sudden increase in development of the neighborhood along the line.
Selby Avenue’s fortunes improved even more, and by the 1910s, Selby was grander than Grand Avenue. Then the Cathedral was built, opening in 1915, and the impossibly posh Cathedral Hill section grew up around Selby Avenue.
The Summit-University neighborhood which includes Selby continued to thrive until at least the 1960s and 1970s, when I-94 construction disrupted the area, notably by wiping out several square miles of middle-class and working-class African American areas in the Rondo neighborhood next door. Many Black businesses and residents moved to Selby Avenue, and this in turn triggered “white flight,” along with the flight of capital and prosperity.
The decline reached its nadir in the 1980s, and then turned around once again. Successive groups of immigrant communities, more civic investment, and natural growth leading to spots of actual gentrification lifted Selby Avenue, along with its continually evolving mix of diverse residents and business owners.
Selby Avenue today bears the marks of its up and down history. Now, venerable and distinguished institutions like the Walker West Music Academy and the Mississippi Market Co-op sit alongside beautiful, well-kept 100-year-old homes and chic cafes and restaurants, as well as gaping holes of empty lots, bleak industrial stretches, and interesting small businesses that come (and sometimes, sadly, go) with the economic cycles. 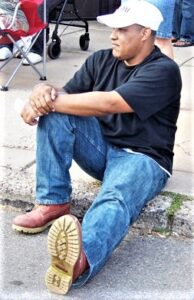 Selby Avenue’s music scene
Fifty years on from its displacement, the African American community is now well-rooted on Selby Avenue. Two musical symbols of that journey are the Walker West Music Academy (which we have covered previously) and the Selby Avenue Jazz Festival. The Selby JazzFest was founded in 2002 by Mychael Wright, the owner of Golden Thyme Coffee & Cafe. It was online in 2020, but was back on the Avenue this year for one day only – Sept. 11 – with live music. You can read about its history and sign up for a newsletter so you don’t miss next year here: selbyavejazzfest.com/history. 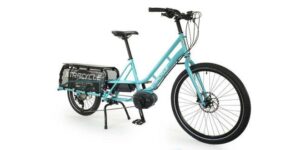 Selby Avenue’s two bike shops
Express Bikes at 1158 Selby Ave. is another of those youth apprenticeship bike shops. They provide two services to the wider community – repair and maintenance service on bikes, and the sale of refurbished bikes. To youth, they provide an apprenticeship program where young workers can pick up life-changing skills, both technical and “soft.”
Cargo Bike Shop at 1592 Selby Ave. is a branch of a shop by the same name in Madison, Wis. This shop has the air of bicycle enthusiasts and activists about it (not a bad thing at all). The bikes they sell are built for comfort not speed, for hauling things, for baby-trailers and for family bike camping. You can preview some of their products online at their Facebook or Instagram account. 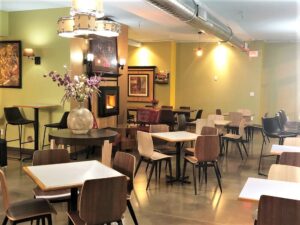 Selby Avenue’s many and varied cafes, coffee shops and pubs
There are way too many of these on Selby Avenue to cover all of them. We’ll cover a quick selection, moving from west to east. (By dining options, below, I mean indoor dining, curbside or counter pickup, and delivery, either by the business or a third party. If patio dining is also an option, that will be mentioned.)
The Naughty Greek (181 Snelling Ave.) has an extensive menu of Greek favorites, and lots of vegetarian options including salads and apps. It has all dining options, including delivery from a choice of platforms. There is also a branch on University Avenue. Rose Street Patisserie (171 Snelling Ave.) is one of two “fine dining” bakeries in St. Paul, and a partner business to Patisserie 46 in Minneapolis. They are takeout-only, according to Google. You can also buy their products in many groceries, co-ops and coffee shops. Cahoots Coffee Bar (1562 Selby Ave.) is an old-style stand-alone coffee shop with quirky decor. It has all dining options except delivery, including a patio. Its online menu lists only drinks, but judging from reviews on Yelp they do have food, and good food too. 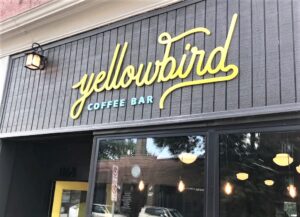 Yellowbird Coffee Bar (1168 Selby Ave.) is also not a chain, but is more modern in appearance. Like Cahoots, it does not have delivery, but does have takeout or inside dining. They serve True Stone Roaster coffee and La Boulangerie Marguerite bakery items in a cozy, neighborhood-centered cafe. Golden Thyme Coffee Shop (934 Selby Ave., mentioned above in conjunction with the JazzFest) is a Selby Avenue institution for going on 20 years now. They have all dining options. (Don’t be fooled by the “No delivery” on their Google listing – they are delivered by GrubHub.) They claim that their coffee is “decadent.” 2 Scoops Ice Cream (921 Selby Ave.) is another African American-owned place nearby. They have all dining options with multiple delivery platforms to choose from. In addition to 18-plus ice cream flavors and homemade waffle cones, they have a full menu of such delights as pizza, hot dogs and pulled pork.
J. Selby’s (169 Victoria Ave.) is that increasingly less rare thing, an all 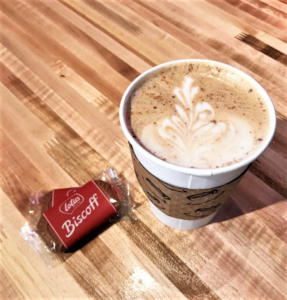 plant-based restaurant. A place where vegans can order anything (barring the occasional allergy) on the menu – what a concept! They have all dining options except delivery. They have a hypermodern no-contact method of ordering from your seat if you’re dining inside, and they have an order-pickup window if you’re getting takeout or eating at their outdoor tables. Also noteworthy is that J. Selby’s did a mighty stint of free-food mutual aid during the uprising last summer. They have a no-tip policy and a community pay-it-forward option. I visited J. Selby’s again recently, but more about that will appear in The Dish for October.
The Gnome Craft Pub (498 Selby Ave.) is a relatively new pub which took over from an older one with a similar name (covered in a previous Selby Avenue spotlight). They currently offer inside or patio dining, or takeout with a curbside option. Their website is worth taking a look at. They have a scrumptious menu and serve desserts from an interesting WOC-owned business, Lutunji’s Palate, which I will also be covering in October’s Dish. Yumi Japanese Restaurant + Bar (400 Selby Ave.) is actually part of a chain of sushi-centered restaurants, including one in Excelsior and one at Southdale. They have an amazing menu too, with lots of delicious food options plus sake, Japanese whiskey and cocktails. They have all dining options available. 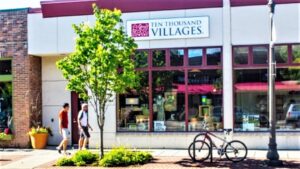 The Handsome Hog (173 Western Ave. N.)) is a very high profile place these days, due not only to its excellent food, but also due to its charismatic, relatable, African American chef-owner (also a TV celebrity chef) Justin Sutherland. They have all the dining options. Reservations would probably be a good idea. The website is like a small novel – so much to read! I laughed, I cried. Even though their primary points of contact are bourbon whiskey and pork, two things I do not consume, there are things on the menu that take my fancy, so there may be a Dish review at some point.
Nina’s Coffee Cafe (165 Western Ave. N.) is on the ground floor of the Blair House Condominiums, one of those gorgeous turn-of-the-century buildings that make the eastern end of Selby Avenue remind you of its glory days. Nina’s has a branch in Stillwater, Minn., also. They have all dining options, and like Golden Thyme, Google says “No delivery” but GrubHub says “No! We deliver.” Their menu is not on their website – neither coffee nor food, but their food menu is available on GrubHub, where we find that they get a lot of their food from good neighbors, including St. Paul Cheese Shop, The Naughty Greek, Great Harvest Bread and the Colossal Cafe.