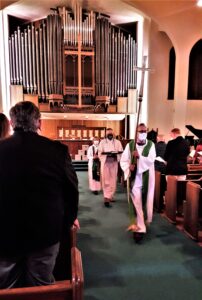 “The Times They Are A-changin’ ” is ever true.

Sunday, Sept. 12, was a “bittersweet” morning, said Bethany’s Pastor Jeffrey Schulz at the final worship service of Seward neighborhood’s Bethany Lutheran Church. An ELCA (Evangelical Lutheran Church of America) congregation at 25th and Franklin Avenues, it was the oldest church in Seward.
Founded in 1902, Bethany throughout its lifetime never shied away from controversy. When the very popular, creative and civic-minded pastor of Trinity Lutheran Church, M. Falk Gjertsen, who had been accused of sexual impropriety, left Trinity to become Bethany’s first pastor, Bethany started out by believing in Pastor Gjertsen’s innocence.
Many changes took place over the years – a fire destroyed the first church and a second was built, the Norwegian language and the lutefisk gradually faded away, the iconic F. Melius Christiansen was not the organist forever, the freeway came through the neighborhood, the Romantic (as opposed to Baroque) pipe organ installed in 1974 was “fried” in an electrical storm (as Bethany’s pianist Harrison 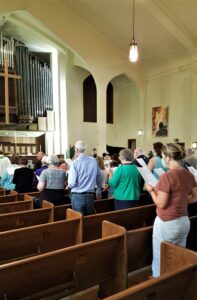 Wade described it) – yet, Bethany faithfully went on building bridges between unlikely parties.
The Council on American-Islamic Relations (CAIR), which provided legal representation to under-served Muslim immigrants at the height of Islamophobia in our country, had its offices in the church building. Pastor Schulz said the church was targeted with threats because of CAIR, but none were acted upon. And, he added, CAIR showed “nothing but openness to our work.”
Interfaith work was very present at Bethany. In 2019, at the Passover Seder at Mount Zion Temple in St. Paul, the church co-hosted a table with CAIR.
Bethany hosted the first community Iftar, the breaking of the fast at Ramadan. They prepared for 50 people, ended up with 250, and supplemented the meal with Pizza Luce.
Longtime member Dennis Johnson remembers Rev. Steve Benson’s words from the pulpit on 9/11, reminding people “not to be negative about Muslims.” Rev. Benson, who started at Bethany in 1996, had a graduate degree in Islam and Muslim-Christian Relations and had lived with his wife, Barbara, in Madagascar, Egypt and India. In 1999, joining other Twin Cities congregations, they established at Bethany a welcoming Christian ministry to Muslim immigrants.
And, Bethany installed Jay Wiesner, a gay pastor, in 2001, before it was OK with the larger church, the ELCA. Bethany was the first church in the Minneapolis synod to ordain a gay pastor in a committed relationship. Dennis Johnson said Bethany wasn’t allowed to vote in the larger church body for a year.
Joe Shelton, who was on the church council for the past six or seven years and the president for about a year, joined Bethany in 2013. He had an infant and wanted his child baptized, so he visited about five nearby Lutheran churches (Lutheranism was his tradition) and settled on Bethany. He was attracted by its diversity of personalities and its openness. The diversity wasn’t just about ethnicities but also the variety of people, from “taxidermists to flamboyant gay people to old Norwegian Lutherans.” He says it’s been an exciting eight years. “The church always jumped in at the deep end of difficult issues.”
Pastor Jeffrey Schulz called it a “quirky” little congregation, who were totally OK with him as a gay pastor in a committed relationship.
(The ELCA doesn’t assign pastors to congregations. The process is more like mutual selection. Schulz says they have a thing like match.com for pastors and congregations, so that’s how they found each other. He’s been happy here for the past three and a half years, but next week is answering a new match in Pennsylvania.)
He loved the way Bethany was always responsive to the community, always the first to try something and always taking on impossible tasks. 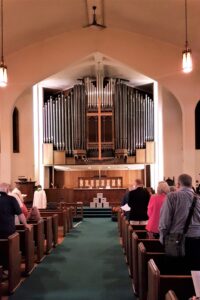 The beginning of the end
In the fall of 2020, Bethany held a service to mark its last worship in its own church building. The church had gifted the building to Augsburg University, its greatest partner and supporter, and the plan was for the Bethany congregation to worship at Augsburg University instead of at the historic church in Seward. At that time, Augsburg and Bethany made a lot of plans for the future, among them redesigning the building into a community center. But the pandemic changed everything. The congregation went back to using its building in early 2021, things continued to wind down, and now, since Sept. 12, the congregation as an entity is no more.
On Friday the 10th, there was a wedding, and on Sunday, a baby boy, a fourth-generation child from the congregation, was baptized.
Church culture was already marginal in 1996 when I started writing about it for Southside Pride. Now it is an even smaller drop in the bucket. There is a new wave of church closings and mergings. According to the Star Tribune, “The Evangelical Lutheran Church in America (ELCA) in Minnesota has lost almost 200,000 members since 2000 and about 150 churches. A third of the remaining 1,050 churches have fewer than 50 members.” There are other similar statistics for the Roman Catholic Church, the Methodist Church and others.
The fact that it’s part of a trend doesn’t make it any easier for those who’ve been members for 64 years, like Betty Stennes. The people in the life of the church have been central to her. She lives in a faraway suburb, like most members at Bethany, and this change is very jolting. She has dedicated herself to making a memory book of photos with multiple copies for everyone.
Already in 1961 when Dennis Johnson and his wife became members (because of persistent visits from the pastor, Rev. Kronstad, something that wouldn’t happen nowadays), the congregation had dwindled to about 60 people on Sunday mornings. When the freeway came through, 37 families left the church.
When Pastor Jonathan Preus led the church, from 1979 to 1990, about four students were confirmed each year in contrast to the typical 50 – 60 per year in pre-freeway years.
A new growth took place, though, during that time. Since the Preuses had been in Tanzania previously, teaching in a Lutheran seminary, their African connections brought a large Ethiopian Oromo community to Bethany, where the Africans held their worship services for many years. They have since divided into other groups and moved away.

What Bethany leaves behind
The basic legacy of Bethany, besides its willingness to take on difficult issues, is its total engagement with the community. And that impetus is what Augsburg University will carry on as it administers the use of the building.
For many years Bethany put on a community health fair, prepared and served a free Thanksgiving meal to the neighborhood and operated a food shelf. It also participated in the Franklin Avenue Art Crawl and had a booth at the King’s Fair.
In 2010 when three people were killed in the Somali grocery store, Bethany opened its doors on the bitterly cold night of the vigil and rally that followed, providing refreshments for the crowd.
All of the occupants of Bethany’s very large building were either “missions,” that is, enterprises supported by the church, or renters with aligned values and goals. There was a day care for a long time. Centro de Trabajadores Unidos en la Lucha (CTUL) was there but is no longer in the building. Bethany worked with CTUL to secure workplace rights for Latin American immigrants. CAIR is still there. For a period of time the East African Association was housed in the building, as were Freedom Fighters, a support group for veterans; Spenders, Overeaters and Alcoholics Anonymous; a gay and lesbian elders group; an herbalist guild; and a Quaker worship meeting.
Last but not least is Soup for You Cafe, Judah Nataf’s “radical soup kitchen,” which provides daily meals and clothing, and will continue to operate after Bethany’s closing.
There is so much to remember and honor. A very important force in the neighborhood has died and will be greatly missed.
Community member Diann Anders wrote to the Minneapolis Seward Neighbors Forum: “When Bethany Lutheran closes, Seward will be losing a dear partner in creating community … I know that SNG and the Seward Civic and Commerce Association have always valued Bethany’s leaders and members. We will remember you all with love.”
For the church itself there is a sense of ongoing mission, whether or not Bethany exists as an entity, expressed by this prayer in the worship service:
“Today we gather for the last time in this place as the people and friends of Bethany Lutheran Church in the Seward Neighborhood of Minneapolis. We give thanks for the ministry that has happened here … Even as we mark the end of an era in one place, we acknowledge how we all are participants in God’s mission, that continues beyond this day and these walls.”