How could I forget Sociable Cider Werks? Plus, new restaurants and other food news, and one mini-review 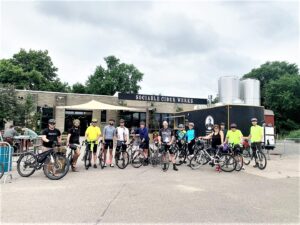 More great cider!
Last month The Dish 2.0 covered a couple of innovative cideries in Minneapolis, and we didn’t even mention Sociable Cider Werks! I apologize for that, and I am going to make up for it by telling you all the cool things Sociable has to offer. First, of course, there is cider. They have five flagship varieties and four seasonal choices. All of them have clever names, mostly relating to bicycles, such as Training Wheels, Freewheeler, and Mead for Speed, in the flagship group, and the upcoming fall and winter seasonals, Rusty Chain and Fat Tire, respectively. The summer cider is a Hibiscus-Rose blend that’s brewed in collaboration with Fair State Cooperative (a brewery close to my heart because a number of my friends work there).
Sociable also has a legendary taproom at 1500 Fillmore St. NE. This taproom is the departure and return point for group bike rides. Some cideries have pickleball courts, Sociable has the Twin Cities bike scene. And it has all the amenities you would expect: live music, open mic nights, special events, food trucks. In fact, Sociable has an interesting approach to the food thing. They actually own an unbranded food truck and feature a rotation of various creative chefs who come in to use it for a few months and provide food. (It is currently the plant-based Francis Burger Joint.)
Sociable will also deliver crowlers* to your home, via a service called Craft Couriers. You can also find Sociable Cider as a guest brew at many pubs and restaurants, and of course at bottle shops, and the wine section of both downtown groceries, Trader Joe’s and Whole Foods. And that’s not all! They have also branched out into two non-alcohol beverage types: Switchel from Superior Craft Elixirs and flavored seltzers from Squoze. (*Crowler is a portmanteau word combining can and growler. They are 25.4-ounce cans.) 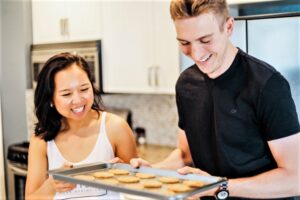 Bella and Myles of Coconut Whisk

We introduced a number of new(ish) restaurants, cafes and taprooms last month. So many, in fact, that I didn’t have room for all of them, so this month I’ll be highlighting some left-behind places that are not really that new anymore but may be new to you. I was really taken by Coconut Whisk, which is located in one of my favorite Nicollet Mall spots, the Young Quinlan Building at the corner of 9th Street and the Mall.
Coconut Whisk was already a going concern for a few years in the form of a seller of gluten-free and vegan baking mixes. The co-founders are Bella (Nhi) Lam and Myles Olson, who met in college (Lam is the first generation of her family to be college-educated) where they won a business competition with the concept. The cafe was launched in May 2021 and is a ground floor tenant in the historic building at 901 Nicollet Mall. The ready-to-eat food sold there includes various pastries, waffles and cakes made with their mixes, which come with a variety of vegan toppings, and boba tea, Vietnamese coffee and other drinkable treats, also vegan due to the use of Bella’s own formula of vegan “mylk” which can also be used in a foam topping.
You can purchase Coconut Whisk’s baking mixes to use at home at the cafe, and also a curated selection of other innovative food and drink products by local BIPOC or women producers. Bella was especially happy that she was able to launch her brick-and-mortar business, which she hopes will be a community gathering space and place for calm and healing, during Asian-American Pacific Islander Heritage Month. 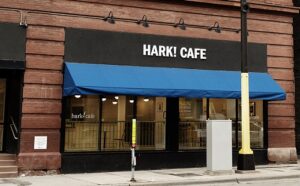 Another new spot downtown is also riding the wave of popularity of plant-based food indulgences. This is Hark! Cafe in the North Loop, located in the historic Kickernick Building at 430 N. 1st Ave. They have two distinct menus – the Tuesday through Friday breakfast and lunch menu, and the weekend brunch menu (with some overlap). There is also a bakery menu and a small but thorough cocktail menu, as well as all the normal coffee drinks (normal but vegan).
A new bakery has appeared in the Seward neighborhood with the sensible name of The Bakery on 22nd Street. They produce a different handcrafted loaf of sourdough bread weekly, which you can order for pickup on Friday. You can also get a monthly subscription. Delivery is available to locations within a five-mile radius for an additional cost of just 70 cents. Check the website (www.bakery22st.com/) for more details.
Another interesting bakery phenomenon I discovered in covering restaurants in the neighborhoods is the behind-the-scenes supplier of sweet baked treats called Lutunji’s Palate. Owned and operated by a Black woman, the eponymous Lutunji, this 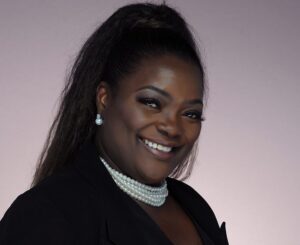 business was founded due to the popularity of her cakes and cobblers with an influential African American pastor. Lutunji has been in business since 2012 and has grown to the point where she has outgrown more than one kitchen.
Lutunji’s Palate products can be purchased online (lutunjispalate.com/order-online) and also found at Lunds & Byerly’s and several farmers markets and specialty food markets. They are also on the menu at several fine eateries, including Handsome Hog and The Gnome in St. Paul and Pimento Jamaican Kitchen in Minneapolis.

Mini-review – J. Selby’s
I had an indoor dining experience at J. Selby’s (169 N. Victoria St.) just in time. The plant-based powerhouse in St. Paul has been very cautious in its approach to business during the pandemic, and had been open for indoor dining as well as outdoor “patio” seating and takeout, only since spring of 2021. But the recent COVID surge caused them to regroup, and indoor dining is now closed for as long as deemed necessary.
If you visited J. Selby’s before the pandemic, you will now find some changes. In the past, whether you were eating outdoors or indoors or getting takeaway, you stopped at a front of the house counter (which is in the back actually) and ordered your food there, then took a table or waited in a small waiting area for your order. Now it’s two different routes. If you’re dining outside or getting to-go, you don’t even need to come in at all, because they constructed a takeout window back in 2020. So you order there in the normal way, either to take it home or grab a picnic table outside. 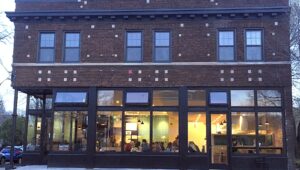 For indoor dining (while it lasted, that is, and presumably if it comes back) there is a very fancy no-contact system. You have to have a smartphone, and you scan a QR code at your table which pulls up the menu for online ordering, with the table number embedded in the order. J. Selby’s is a no-tip restaurant, but you can include a donation to the pay-it-forward fund. You can also order one of the menu items, the Community Bowl, to be held for someone who can’t afford to eat out to claim later. (They always had that.)
In my rare outing to a real sit-down restaurant in St. Paul, one that’s completely vegan to boot, I had a burger. To be specific I had a Solo Burger, with a kale salad as my included side, and a whole order of fries (which are excellent, but such a huge serving that I took half home) and an Arnold Palmer. (That’s a half-and-half mixture of lemonade and iced tea.)
MAJOR shoutout and kudos to J. Selby’s – although just what I would expect from this restaurant that places ethical practices at the center of its philosophy – there was a “no straw” option on the drink order in this no-contact menu. Lesser restaurants: please take note and learn from this! The food was, as always, excellent.