City wants to dump the water yard in Phillips 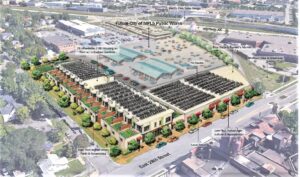 On Friday, Oct. 8, the Minneapolis City Council voted seven to six to reverse course and put the city’s water yard in the Phillips neighborhood at the Roof Depot site. This was done primarily at the urging of Council President Lisa Bender. She said the city has already spent $12.9 million in planning to relocate the water department from its historic home in the Marcy-Holmes neighborhood to Phillips. This all seemed cut and dried until neighborhood activists committed to renovating the Roof Depot to an urban farm discovered a planning document from June of 2021 that had been suppressed by Bender and city staff.
That document, “Minneapolis Water Yard Proposal for New Two-Story Structure on Existing Site,” says, “demolition and site clearing activities will result in unassessed risk from legacy contamination, unaccounted costs, and increased exposure to the neighborhood from dust and from truck traffic hauling hazardous waste to landfills and will require dust mitigation.
“This document is intended to propose an alternative solution, demolition of the primary operations building at the existing site in Southeast Minneapolis and reconstruction of a new Water Yard facility. Redeveloping the existing site presents several opportunities including:
– Maintaining the functionality and vitality of historic buildings on the south end of the property in recognition of the role of the Water Yard’s 123-year history of water system operations from its present site.
– Building with a carbon-free goal. Unlike the Roof Depot site, the existing site is not contaminated. This could be an opportunity for the City to use geothermal energy for heating and cooling the facility. By installing solar panels on the roof, solar energy could be used to help power the pumps that circulate the heating and cooling lines. By creating a first of its kind city facility, the City could demonstrate commitment to its goals in the Minneapolis 2040 plan.
– Utilizing the design of the new facility that RSP created for the Roof Depot site. The functional layouts for the office, locker rooms, lunchrooms and shop spaces can be incorporated into the plans for redevelopment at the existing site with minimal alterations. 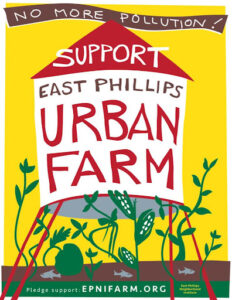 “It appears that the reuse of the two historic buildings and the reconstruction of the main building would be consistent with the Neighborhood Association’s Master Plan. The existing Water Yard operations also has a good relationship with its Marcy-Holmes neighbors.
“In contrast, the East Phillips Neighborhood has opposed the Hiawatha campus expansion project at the Roof Depot site since the City’s purchase of that property was first proposed in 1991. The Roof Depot is in a neighborhood with a high percentage of BIPOC residents that is adjacent to a US EPA Superfund site dubbed the ‘Arsenic Triangle’ since it was heavily contaminated with lead and arsenic from industrial stockpiles of pesticides. After years of remediation and unknown expense, the Superfund site has been cleaned up. Since contaminates migrate across property lines, the Roof Depot property redevelopment poses an unknown risk of contamination that could be released during demolition and hauling activities. In March 2021 the public comment period closed for the environmental assessment worksheet for the Hiawatha Campus Expansion. It has been reported that the City received approximately 1,000 comments.
“By rebuilding on the existing site, the new Water Yard will likely be considerably cheaper.
“By removing the existing main building at the Water Yard and replacing it with a new two-story facility that makes more effective use of the space, the City has an opportunity to accomplish:
– Providing a space that is sufficient and functionally laid out to effectively support Water field operations.
– Preserving historic buildings and continuing to use them.
– Maintaining a sense of identity and common purpose for Water staff.
– Re-developing the land in a way that is consistent with and respectful of the Neighborhood Master Plan.
– Taking steps towards the City’s commitment to carbon-free building goals.
– Using RSP’s design for the Water facility at Roof Depot.
– Making use of City-owned land.
– Maintain a central location to minimize response time for Water crews to travel to any part of the City.”
It would be cheaper for the city to keep the water yard where it is. It would be an environmental disaster to dig up the arsenic-soaked Roof Depot site. Most of the $12.9 million spent on planning is probably from architects’ plans for the new building which could easily be used for renovation of the existing site. The Marcy-Holmes neighborhood is quite happy with the water yard in their neighborhood, and the Phillips neighborhood is up in arms.
Dean Dovolis of the East Phillips Neighborhood Institute (EPNI) says, “We’re going to war with the city. We cannot sit back and allow this continued pollution. We have a moral obligation to defend our community at all costs.” EPNI is planning litigation to stop the city from continuing to dump pollution in their neighborhood. “Don’t worry. We will fight on!”