Dinkytown today – some ‘old-timers’ and some new adventures 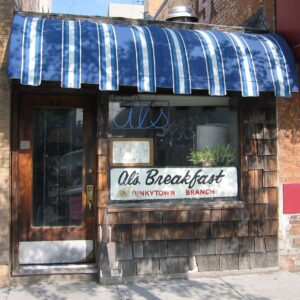 I went back and read Southside Pride’s pieces on Dinkytown from the past few years. (You can do that too, if you go to our online version southsidepride.com and type Dinkytown into the search bar.) It was, with 20/20 hindsight (plus now we have 2021 hindsight as well), a slightly vertiginous trip. So many things we didn’t know about then. For instance, in 2016 we were reporting that a two-block area within Dinkytown had been designated as an area of historic significance, and speculating on the incoming wave of new housing development. That wave has swept over Dinkytown, and the bulk of the Marcy-Holmes neighborhood. It’s not finished sweeping either.
And yet, for all that, something in Dinkytown hasn’t really changed. Only the surface has changed. For instance, even though there are fewer people about, it really is hard to find a parking spot now, even though we commented back then that Dinkytown’s reputation in this area was not deserved. On my last visit, I kept getting disoriented, and forgetting what I came for. It’s all a little faster, a little more tense, but then aren’t we all? I don’t know about you, but a lot of things I used to see as solid have come to seem – somehow provisional?
So we’ll start by looking at some old-time residents of Dinkytown, starting with the very oldest. Al’s Breakfast is a lot older than I thought. I have been to Al’s only once, a long time ago, and it didn’t really click for me. But I know people who are so passionate about Al’s that you just know, without being told, that it’s not just a place to eat, it’s not even about the food – it’s some kind of self-selected semi-secret community. Al’s Breakfast dates back to 1950 and an actual guy named Al. It has had three other owners or sets of owners since then, but the chain has never broken. After being closed for a very long time due to COVID, the faithful of that community were able to reunite again in that tiny space quite recently. (I knew the actual date, from a post by one of my insider Facebook friends, but I forgot to write it down. Sorry.) 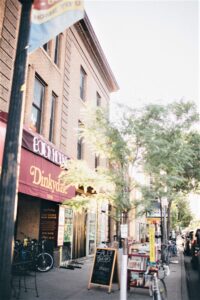 Not quite as old-time, but getting close to 50 years in business now, is the Book House. It has had only one true change of ownership, but had incremental changes before that. (Four people, two married couples, founded it, in the mid-1970s, but by the 2000s only one was left in charge. She retired a few years ago, leaving it to her chosen successors, two long-time managers.) However, the Book House has moved a few times. One of its sites was demolished to make way for one of the shiny-box student housing structures. The Book House is currently up on the second floor of Dinkydale, at 1316 4th St. SE. You can visit in person now, but its website is a wonder, so you can also shop online.
The third old-timer is one of my favorite eating places in the whole city – Shuang Cheng. It’s a Chinese restaurant with a solid reputation and another strong following, larger but less passionate. And here, it really is about the food. Nothing modern or flashy, but several steps up from the usual lo mein, chow mein, General Tso’s chicken kind of Chinese food found at lesser places. It’s just the kind of place I like. I am comforted by the cliched standards of Chinese American dining – the tiny cup of hot jasmine tea, the disposable chopsticks, the cream cheese wonton – but then I like the main dish to be a little more challenging, some new-to-me ingredient or maybe a spice combination that makes me sit up and go hmmm. 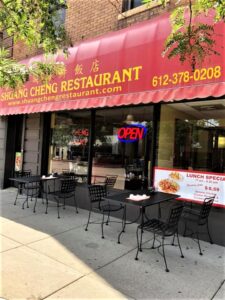 One thing that Dinkytown has lost in great numbers is coffee shops. I remember the coffee shops of twenty years ago – the original Purple Onion, funky and a little punky, and Espresso Royale, so atmospheric you felt like you needed a slim volume of French poetry to be allowed to linger there. Espresso Royale vanished while I was in England, but Purple Onion had just cleaned up and grown larger and moved to a new location. But now it too is gone, closed permanently in the fall of 2020.
Two years ago, I covered a new coffee shop, in fact, a new kind of coffee shop. Cosmic Bean was a combined coffee shop and CBD dispensary, and you could get coffee drinks with a CBD shot in them. Just before the pandemic, they were introducing yoga classes. Sometime in 2020, a local developer proposed yet another high-rise student housing project in that space, which also included a sort of medical marijuana boutique-cum-tobacconist called Hideaway. After much pushback from the neighborhood association and the Preserve Historic Dinkytown (PHD) group, the developer prevailed and broke ground in September of this year.
The new apartment block is actually within the two-block designated historic area in Dinkytown, and PHD counter-proposed a few mitigating suggestions when they were unable to stop it, but those too were rejected. Hideaway plans to reopen as the ground-floor tenant of the building, called the Doyle Apartments. But there are no future plans for Cosmic Bean at this time. I know I’m biased, but to me, a coffee shop as a ground floor tenant would go a long way toward preserving what I see as the historic character of Dinkytown. Bordertown, a nonprofit full-service coffeehouse on 16th Avenue which we covered in 2019, is still there and open for service. 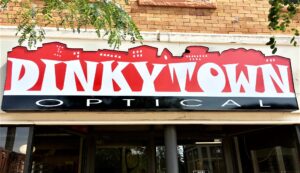 A number of other businesses we covered in 2019 as new, relatively new, or soon to open, have managed to hang on through the pandemic. Insomnia Cookies, the University Food Hall, and its first tenant Avocadish are all still there. Also, the Food Hall’s other tenants, Hokkaido Poke and Sushi and Mi Tea, are open for business, as well as a place I reviewed in a past issue of The Dish – K-Bop, a Korean diner in the Chateau Student Housing Co-op. A couple of others covered in 2019, Wally’s Falafel and the Lands End Pasty Company, are seemingly doing very well.
Most of the services have made it through OK (so far). Dinkytown Optical is another old-timer of note, having served the community for 40 years and counting. They offer eye exams and an on-site lab to provide same-day or next-day turnaround on most prescriptions. With over 1500 frames on display, you can go with a new designer look or choose a quality, budget-priced package to suit your needs. Check their website for current hours as well as daily deals on eyewear. Other services we’ve covered in previous years, including Alpha Print Shop and Erik’s Bike Board Ski, are still in their old places, too. 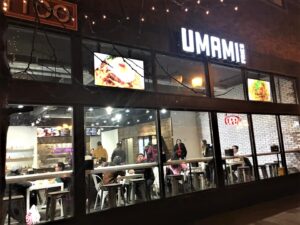 What I was surprised to find so many of, on my last visit to Dinkytown, were Asian restaurants of one type or another. Not that I’m complaining. I love them all – Japanese, Korean, Vietnamese (they’ve got that, also, another old-timer, Camdi) or fusion. I guess the students love them too. One of the interesting-sounding newcomers is an attempt to start a chain. It’s the first new branch of a concept – Asian flavors and sides applied to American favorites like burgers and tacos – called Umami Fries, from Tulsa, Okla., of all places. The Tulsa place is family owned, and the family is Hmong, and when a branch of the family moved to Minneapolis, they thought, “Let’s franchise it.” I am eager to try this out. Umami Fries is at 405 14th Ave. SE.
Another place I have mentioned in past articles but still have not managed to visit is Banh Appetit. It’s been there for a few years and appears to be thriving. Banh Appetit is the “descendant” of a very similar place called Bon Mi that was displaced by development from Stadium Village. I think it’s pretty obvious what their specialty is. 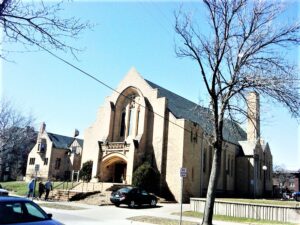 One old-timer I didn’t mention is still there but under a new name and with a new concept. The former Loring Bar and Restaurant reopened in December 2020 as Gray’s in Dinkytown, the name being an homage to Gray’s Drugstore which was in the space decades ago, but had such a pretty sign that no one ever tore it down. Clever recycling.
The Roots Cellar, a popular roots music venue in the University Baptist Church, has not managed to reopen for real life concerts but is planning and hoping for winter of 2022. In the meantime, they have set up a page for all their performers over the years to host their own virtual concerts with a tip jar. Check it out at www.ubcmn.org/roots-cellar-music.