The Keewaydin pool is gone? 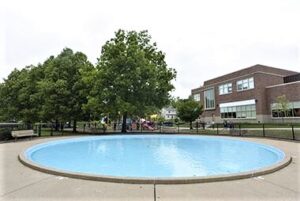 Residents of the Keewaydin neighborhood in South Minneapolis are totally confused as to how they ended up with a plan that would eliminate any water features in Keewaydin Park.
A master plan was created for Keewaydin Park in 2012 that would take out the current wading pool and replace it with a zero-depth entry pool with splash pad. The neighborhood approved this plan. Now, they have been given a plan that gets rid of the zero-depth pool with splash pad AND the current wading pool. So, there would not be any water features on the property.
Under Commissioner Steffanie Musich’s leadership, a larger master plan was done in 2016 called the South Service Area Master Plan. This plan removed all water features from the Keewaydin master plan and replaced them with a boulder climbing wall feature. The master plan shows that the Park Board received ZERO comments about Keewaydin Park in the initial public survey. On the second public survey it is unclear what type of comments were received about the water features; the plan just states that there would no longer be a water feature on the site. Did these public surveys really do an adequate job of soliciting input from the Keewaydin community? Apparently not.
Now members of the Keewaydin community are upset. They do not want to lose the water features for their young ones, especially after this past summer when up to 75 children used the wading pool each day. This plan needs to be redone with real community input!