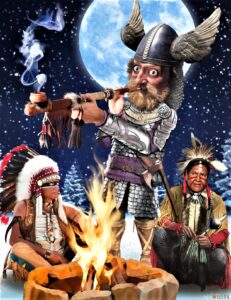 It is a little known but very true fact: long before Christopher Columbus made that famous wrong turn, this land was already in for a bad experience. Half a millennium earlier, Leif Ericsson, whose Norse nickname was Leif the Lucky but whose real name was Leroy Jones, got to Minnesota on purpose. And didn’t even have a problem with people already being here. His attitude was, How you gon’ discover something that’s inhabited and being put to good use when you “discover” it?
That’s like me and my cat walking along, see your brand-new car and she says, “That sure is a beautiful automobile. Wish it was mine.” So, I say, “Well, Onyx, let’s discover it.” Accordingly, everyone got along just fine.
Thing is, Leroy and his boys were invited to party by the Natives one night, the peace pipe got passed and had wacky tobacky in it. After that little throw-down nothing was the same again. Unlike the folk who cultured and grew the herb, Leroy and them had an odd biological reaction. It sort of changed their brains. I guess you could say they began to develop what could be called Columbus-itis, started giving each other funny looks, trading shifty glances. After the Americans had turned in to get some shut-eye, their new Norse neighbors got a bright idea. They’d noticed these friendly folk who’d welcomed them to the land didn’t wear a whole lot of heavy clothes. In fact, they pretty much wore just enough to not to be walking around in the completely altogether. Next morning, there was a note left on their lodgings from the Norsemen and Norsewomen. “Had a great stay. Thanks for the smokin’ good time. We’ll be back.” Naturally, not having seen “The Terminator,” the Natives thought nothing of those last words, shrugged and went back about their lives.
Well, when, Leif, Leroy or whoever came back with his crew, they had gone clear to Norway to retrieve some of the most God-awful cold weather, including their own invention, snow. They figured if they made the place freezing, it’d drive the Natives off and that way the place could be claimed fair and square with no qualms of conscience. What they didn’t count on was that these was some resilient folk who simply put on long-johns, fur coats, scarves and gloves, adapting quite comfortably to the new conditions. The Norse folk then looked at one another, sighed, threw up their hands and said to hell with it. They shook hands with the Natives, got back in their boats and was never seen again. They forgot, though, to pack up the miserable weather, especially the snow, and take it with them. So, thanks to a sneaky, white conspiracy that never worked out but left a lasting condition nobody but them had any use for, we now have Minnesota. Or as it is commonly known, Minne-snow-ta. True story.