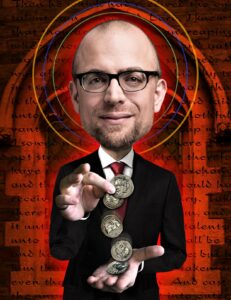 Last July we called Jeremy Schroeder “The foolish public servant who wants to do good.”
We wrote:
“When I was a small boy attending Mass at St. Helena’s Church, I remember a sermon by my favorite priest, Father Don Schnitzius. The way Father Don told the story of The Ten Talents, it was slightly different from Matthew, Chapter 25, but the message was essentially the same. A man has to go on a journey and he entrusts each of his three stewards with ten talents of silver. The first steward invests the talents and makes a profit of ten more. The second invests the talents and loses them. The third buries his talents. When the man returns he asks his stewards for an accounting. When they tell him what happened, he congratulates the first steward and tells him to take the twenty talents and invest them. When the third steward tells the man he buried the talents so he wouldn’t lose them, the man takes the talents away from him and casts him out where there is wailing and gnashing of teeth. When the second steward tells the man he invested the talents but lost them, the man says it is good he tried and he gives the steward the ten talents that the third steward had buried.
“I can’t help but think of that parable when I see the City Council wrestle with their responsibility to protect and serve the public. And none seem as earnest and serious about their task as Jeremy Schroeder.
“Jeremy Schroeder wouldn’t vote to increase the Minneapolis Police Department budget by another $500,000 until he knew how the money would be spent. He didn’t think it was his job to give any department a blank check. He and Council Members Phillipe Cunningham and Steve Fletcher wrote a charter amendment to transform the MPD. Just last week he withdrew his charter amendment in favor of the similar one proposed by Yes4Minneapolis.
“No one can doubt Jeremy Schroeder means well.”

The amendment failed in November, and Schroeder, Cunningham and Fletcher lost their seats. They stood on the stage at Powderhorn Park behind a banner that said, “Defund the police.” They got swept up in a utopian dream of living in a community where we didn’t need the police, and all a candidate running against them had to do was just not say anything real bad against the police and they could get elected.
In spite of all the limitations of the charter amendment, Southside Pride supported it. We supported it because the people supporting it meant well. They were trying to solve the serious problem of the Minneapolis Police Department killing young Black men. They were courageously telling their constituents about racism and the need for less lethal forms of social control, and their opponents were burying the issue under a mountain of platitudes praising law and order.
Of course, none of the candidates who supported the charter amendment actually supported defunding the police. They wanted to transfer some of the functions to social welfare agencies. They wanted better training. They all voted to increase the police budget. But none of that registered with the voters. There was an increase in crime. Voters were scared. They felt vulnerable. They wanted some protection from the police.
And the police knew how to turn the screws. They staged a work slow-down. As Reuters Investigates reported in a Brad Heath story titled “Hands-Off Patrol”: “MORE CRIME, FEWER STOPS: Amid outrage and protests over George Floyd’s killing, officers in Minneapolis took a less active approach to policing.” They used the absence of their labor to pressure voters to throw out incumbents in the more conservative wards in the city.
I recognized the tactic. I had something like that happen to me when I ran for re-election to the City Council from the 8th Ward in 1975, 47 years ago. Jerry Lutz, the captain of the 3rd Precinct, door-knocked with my opponent in full uniform in the more conservative areas, and Clarence Nimmerfroh, the Chief of the Fire Department, closed the fire station at 42nd and Cedar, further terrorizing my constituents and driving me out of office. Nimmerfroh was quoted in the Strib: “Aldermen, they come and go like the autumn leaves.”
There should be a public investigation to determine if officers in the MPD deliberately staged and supported a work slow-down that endangered the people of Minneapolis. Was this a tactic by the Police Federation and its former president, Bob Kroll, to get even with the mayor and City Council after the burning of the 3rd Precinct and the conviction of Derek Chauvin? Why didn’t the mayor and the Chief of Police tell us what was happening? We deserved to know. And the officers that put the city in jeopardy should be held accountable.
Jeremy Schroeder was unfairly branded as someone who would defund the police, and he was plagued by the slow-to-nonexistent response from police patrols last summer and fall in the 3rd and 4th Precincts.
We wish Mr. Schroeder well in his new endeavors. We hope he stays close to home and continues to contribute to the public life of South Minneapolis.