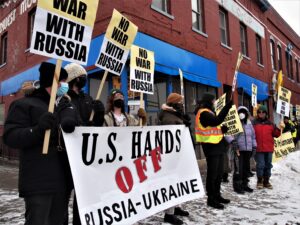 On a very cold Saturday afternoon on Feb. 5, 70 people joined a Minneapolis protest to speak out to say, “No War with Russia.”
A statement issued by organizers read, in part, “Following the Biden administration’s announcement that 3,000 U.S. troops are being moved to Eastern Europe, people will be taking to the streets to raise the alarm about the dangers of a U.S.-Russia war.”
“For the last 20 years,” the statement continued, “the U.S. has been in a series of endless wars, interventions, drone strikes, and bombings, the U.S. has occupied or bombed Iraq, Afghanistan, Libya, and Syria. The real threat to peace is the U.S. war machine. The people of the U.S. need an end to the endless war threats, people need housing, COVID relief, a real struggle against inequality and racism, not new wars and war threats.”
Groups participating in the protest included Minnesota Peace Action Coalition, Anti-War Committee, Veterans for Peace, Women Against Military Madness, and others.