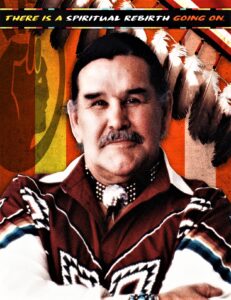 Clyde Bellecourt Nee-gon-we-way-we-dun, “Thunder Before the Storm,” left his mortal body on the evening of Jan. 11, 2022. He left behind an Indian community, a city, and a world that is changed for the better because of his work and sacrifice.
A man of principle, a man of gentleness and strength, a man of courage and achievements, he was a force in every room he was in. I remember during the planning for the march to the Washington R-word football game in Minneapolis. The police had the permit all filled out, he just needed to sign it. Clyde said no, “I don’t get permits to walk on my own land,” and that was that. I think the cop signed it.
Cancer took his strength in the last years but his friends, his children, and his community are carrying on with inherited strength. He would definitely remind us of the adage, “Don’t mourn, organize.”
Let me tell you a little about Clyde Bellecourt. Clyde spent his life in service to our community in Minneapolis. He helped start the American Indian Movement 40 years ago in Minneapolis in response to the Minneapolis Police Department’s abusive activities in the American Indian community. The AIM patrol, a group of courageous men and women who were available to document, intervene and correct the activities of the police, played a vital role in improving the lives of many people in our community. 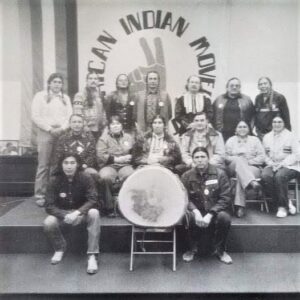 I first met Clyde back in the early ‘70s. There was the campaign to stop the wet T-shirt contests which were resulting in the rape and abuse of Indian women in the bars on Franklin Avenue. Later, many of the worst Franklin Avenue bars and liquor stores were replaced by other businesses, including the American Indian Center. Through the years, Clyde stood in the street with people to get a stoplight on Cedar Avenue to stop the deaths of Indian youth, when then-mayor Stenvig set dogs on children and others who were trying to speak truth to power.
Clyde was instrumental in starting the Legal Rights Center to provide lawyers and legal representation to people who were arrested, a place where a young lawyer named Keith Ellison cut his teeth. Clyde started Heart of the Earth Survival School and American Indian OIC; helped to start Migizi Communications; led the effort to save the housing project that became Little Earth of United Tribes, the first and oldest community-controlled HUD housing project in the country. He chaired the Police Community Relations Council in Minneapolis for five years. He was criticized for being window dressing for the city, and later said that it was a waste of his time, but he felt that he should try to do what he could to improve the behavior of the police and bring understanding to the community. More than a few police and community members were educated for the better owing to his efforts. I am not sure I agree that it was a waste of his time, but he did set high standards for himself.
Clyde did so much more than I could enumerate here, from his work at Wounded Knee to his efforts to change the way Native people are portrayed in the media and as sports mascots. I can only talk about what I have seen – and what I have seen over the last 40 years makes him one of the many people whom I admire, respect and, yes, love. 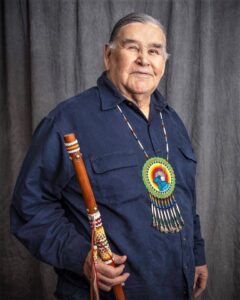 On Christmas Eve day in 2012, Clyde went to the Crystal Court in Minneapolis to watch some of his relatives dance and sing in a “round dance” that was part of a national effort to bring attention to an effort in Canada to preserve treaty rights. Chief Theresa Spence was in the second week of a hunger strike, and her situation was extremely serious. The young people called their effort “Idle No More.” Clyde was not an organizer of the local event or the international effort, but he was supportive and wanted to show up and see what they were doing. He was not alone – dozens of others went to witness, and many of the shoppers stopped to watch and enjoy. From what I was told, none of them were inconvenienced or prevented from doing anything they wanted to do.
Clyde arrived late and moved slowly, with a cane, as he was recovering from knee replacements, and had diabetes and heart disease. He sat on one of the benches with other shoppers to observe the activities. He said that a police officer approached him and asked him to get the dancers to stop performing and leave. He explained to the police that he was not an organizer of the event and was not the person to ask. The officer then said that since he was their “Chief” he could get them to stop. He responded that, yes, he was, but he did not work for the Minneapolis police, and if they wanted them to stop they should ask them. At this point the officer then ordered Clyde to leave. Clyde got up and went to a nearby Starbucks and purchased a coffee. He told me he thought his blood sugar needed a boost. He then sat down at another bench. As the dancers were finishing up and leaving, the officer again asked Clyde to leave. He grabbed Clyde’s arm and his coffee went all over both of 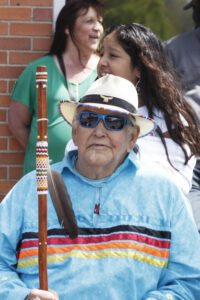 them. The officer also picked up the cane which Clyde used to stand up and walk. When Clyde explained that he could not get off the bench without the cane, the officer then told him he was under arrest. At this point some of the dancers had returned and were yelling support. The police pushed him to the ground, bent his arms around his back, presumably to handcuff him, causing significant pain. Cries of “That’s my uncle …” and “Leave him alone … ” were heard by witnesses. The officers called paramedics and instructed them to transport Clyde to jail. Clyde reported that the paramedics were very good and gentle. They asked him if they could put him on a stretcher, which he agreed was a good idea. He gave his car keys to one of the supporters and asked them to call a lawyer.
The lawyer, Larry Leventhal, had difficulty finding a judge on Christmas Eve to open his courtroom to get Clyde out of jail. Using the venerable name Clyde Bellecourt probably helped, and Larry could be persistent. A judge was persuaded to order the city attorney to release Clyde, and about five hours later, Clyde, bruised, sore, and more than a little angry, I am sure, was released from custody.