To boo or not to boo? The Parkway Theater’s ‘SCREAM it off SCREEN’ evenings let you decide 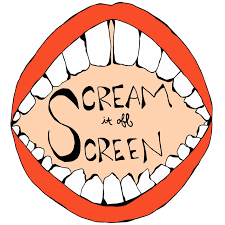 Think of the Parkway Theater’s monthly event, “SCREAM it off SCREEN,” as a combination of the Gong Show and a night at The Rocky Horror Picture Show. But more fun. Unlike Rocky Horror, you don’t need be part of the club or know all the lines, and you don’t have to dress up or bring props.
And unlike the Gong Show, there aren’t any live performers to boo. Even if you’ve never been to “SCREAM it off SCREEN,” held the first Friday of each month starting at 8 p.m., you’ll catch on and be part of the crowd in no time.
The rules are easy. Filmmakers submit short films, 15 minutes or less. The theater chooses 15 of these, at random, to present to the crowd. Halfway through a showing, for films shorter than four minutes, the red lamp under a small Chinese-style gong lights up. For films longer than four minutes, the light comes on at the three-minute mark. That’s when the audience gets involved. People can yell “Let it play” or “Gong!”
If the judges think it’s a toss-up between the Yeas and the Nays, the film will be paused and those who like the film will be asked to stand. If those standing are judged to be the majority, the film will continue and those who disagree will have to watch in silence. If the film’s fans are in the minority, it’ll be time to move on to the next film.
It’s all in good fun. At the end of the evening, the top winners vie to be the ultimate audience favorite. Winners are decided scientifically, with a decibel app to measure the cheering. At the end of the night, the winner receives a giant check, for $101.01.
In between the films, the night’s cast does comedy. Not stand-up so much as shtick, a running gag that differs every month. There is music, too. And SCREAMy, the show’s mascot, a creature with a red body, a large red head with no eyes, and a huge grin, dances through the audience.
Of the 15 films screened on Feb. 4, four were gonged and 11 moved on.
During the February event (jokingly called the Valentine’s Day show by the host), the films that moved on were “Space Tiger Samurai” (an animated Asian-style film about a tiger flying in a spaceship that looked like a 1950s American car, directed by Scotty Monten), “The Host Cell” (a story about a pre-teen girl in the 1970s watching a TV space fiction story while her parents argue in the background about the good-for-nothing father-in-law, directed by Joey Hamburger), “SUCCOR” (an entertaining but disturbing animation directed by Steven Lapcevic), “Dave and Derek: Episode 4” (comic mishaps with a green-screen bodysuit, directed by David K. Greene) and “Mary Dan Food Review” (a funny commentary on Pop-Tarts, directed by Mary Danielson).
While “The Host Cell” got the most votes, the winning director was not available at the end to pick up his winnings, so “Mary Dan Food Review” ended up taking home the prize.
The Parkway was nearly full and many in the audience were regulars. Sam Weston, a filmmaker from Duluth, travels to Minneapolis almost every month to attend and join in the fun. “They show a lot of bad films and a lot of good films,” he said. (Weston’s new film, “Gleahan and the Knaves of Industry,” will be released on March 3 on the Fantasy Network.)
The monthly event can run late, but wine, beer and cocktails are available and can be enjoyed inside the theater. They also have a live, virtual “SCREAM it off SCREEN” on YouTube on the second Friday of the month (“typically,” the website says. The next one is set for Feb. 18.)You can check the schedule at www.screamitoffscreen.com.
The Parkway also has other live concerts, events and classic movies. “I try to program an eclectic mix of both Minnesota and national touring artists. We also occasionally partner with the MSP Film Society and other arts/entertainment groups in the Twin Cities,” said Jessica Paxton, the talent buyer and marketing specialist at the Parkway.
The theater is also available for private rentals. People in the neighborhood frequently rent the theater for small get-togethers and private movie screenings – a fun option for celebrations with friends and family members.
Upcoming events include live concerts, stand-up comedians, iconic silent films with live musical accompaniment, film premiers and famous more-recent movies such as “Shrek,” “Highlander,” “The Muppets Take Manhattan” and the actual “Rocky Horror Picture Show.”
Come every month to be part of “SCREAM it off SCREEN.” Organizers say there won’t be a SCREAM in April (that’s April 1 but this is not an April Fool’s joke) but if you want to attend any of the other shows, come to the Parkway with proof of vaccination and a mask.