What about Umbrella Man?

“We have evidence that extremist agitators were hijacking protests to pursue their own separate and violent agendas.”
– William Barr, The Wall Street Journal, 7/28/20 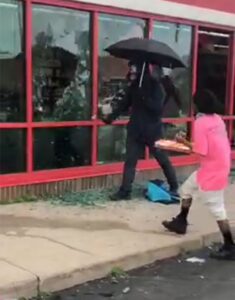 In the spring of 2020 we saw the images: a tall, white man dressed in black, wearing a gas mask, carrying a sledgehammer and a black, open umbrella in front of the AutoZone on East Lake Street, near the 3rd Precinct. Flames burgeoned in the background, engulfing “Umbrella Man” (UM) and the demonstrators who were protesting the Minneapolis police murder of George Floyd. This took place on May 27, 2020, two days after Floyd’s death. Once the video hit social media, it went viral and the world saw it.
Rumors and theories about who Umbrella Man (UM) was – and what he was – flooded social media. Articles appeared in mainstream as well as unconventional media. Speculation included: a member of ANTIFA (anti-fascists)? A right-wing extremist? A police officer? Local hooligans? A BLM protestor? Two months later UM was identified in a police search warrant submitted by Minneapolis police officer Erika Christensen (on the force 28 years, 13 of them in arson investigation). The Hennepin County District Court granted the warrant based on “probable cause.” Probable cause means “reasonable grounds.” There was a flurry of coverage, and then nothing. No arraignment, charge or arrest. It seems to remain an open investigation.
The video revealed that the infamous Umbrella Man used his sledgehammer to systematically break the windows of the AutoZone store. Prior to breaking the windows he spray-painted “Free Shit for Everyone Zone” on the front door. This gave rise to looting. Soon the AutoZone was on fire. Police believe that UM’s actions set off the first fire and a chain reaction (planned?), leading to additional arson and looting, including the fire that destroyed the 3rd Precinct building. The rest is history: deaths, hundreds of arrests, criminal charges and approximately 1,500 buildings damaged or destroyed, costing in excess of $500 million. Protests spread beyond Minneapolis, creating the largest protest in U.S. history, with 26 million people participating from coast to coast. The protests were felt around the world and were the second most destructive in the U.S. after the Los Angeles riots of 1992.
Also in the UM video we see a young, Black man in a pink shirt (later identified as Elijah Easley, aka EJ) approaching UM and, while we cannot hear the conversation, it appears that Easley is asking him who he is and gesturing, encouraging him to stop what he’s doing. UM yells at the man in the pink shirt but what he says is indecipherable. Later, in an interview with Loud News (9/7/20), Easley revealed that UM was challenging him to fight if he didn’t leave him alone. Also on the video it is observed that UM has a white substance on the right index finger of his glove, which would be a match for the white spray paint used to write on the AutoZone doors.

The July 27, 2020, search warrant identifies Mitchell (Mitch) Wesley Carlson, from Ramsey, Minn., as Umbrella Man. The warrant requests information regarding a particular Sprint phone number believed to be Carlson’s. Incoming and outgoing phone and text records are requested for May 27, 2020, along with cell tower locations, pings and so on. The warrant further states that prior to UM’s actions the demonstrations were relatively peaceful. That is, that the actions of UM incited hostility, tension and violence. The research in support of the warrant involved hours of watching video and social media such as TikTok, Snapchat, YouTube, Instagram, all to no avail regarding the solid identification of UM. The police also worked with the Alcohol, Tobacco and Firearms National Response team but were unsuccessful. Then came a tip that was emailed to the Minneapolis police. Additional research identified the tipster and the police were able to speak directly with this person, who was passing the information along for another individual who preferred to remain anonymous out of fear of Carlson. The informant stated that Carlson is a member of the Hells Angels Motorcycle Club and associated with the Aryan Cowboy Brotherhood (ACB), a small, white supremacist prison/street gang based in Minnesota and Kentucky, whose symbol is a helmeted and winged skull with the initials ACB. “He wanted to sow discord and racial unrest,” the informant told police.

Carlson’s past convictions include disorderly conduct, brawling, fighting, assault in the fifth degree, terroristic threats, reckless disregard and domestic abuse. Charges that were dismissed include assault in the second degree and domestic assault by strangulation.
In addition, it seems Carlson was present during a June 27, 2020, “incident” in Stillwater, Minn. A young Muslim woman who was with her toddler was harassed by a motorcycle group wearing Aryan Cowboy leather vests. Carlson was photographed in this group. The affiant (of the warrant) compared various photos of Carlson to photos of Umbrella Man and notes “there is a striking resemblance in the eye, nose, bridge and brow including a slight variation in Carlson’s left eyebrow, also present in the photo of Umbrella Man.” Carlson is 6-foot-2 in height which also matches the images of UM. He has not been charged with this crime and of course remains innocent until proven guilty. Beyond this warrant and Carlson’s Facebook page no one seems to know much about Mitch Carlson, regardless of his 903 Facebook friends.

Mitch Carlson has a Facebook presence; his last post was in 2017. A cursory scroll through his posts reveals images of skeletons with clothes; women shooting handguns; a table full of firearms; motorcycles; Nazis; Hells Angels; a man giving the Heil Hitler salute; Carlson on a motorcycle, shirtless and tattooed, seemingly with his initials, MWC, across his chest; Carlson giving the middle finger to the camera and sticking out his tongue, flashing the peace symbol; piles of money; horror images; smoking ribs; boxing; violence; many references to “bad asses”; Marilyn Manson; dogs; pictures of Hitler; comments about “White on” ( vs. “right on”); and pretty young women with tattoos and black lace lingerie. His likes include “Prosecute Obama”; “Pissed off White Americans”; “MN Gun Rights”; heavy metal bands Pantera, Metallica and Slipknot; and mention that he went to Champlin Park Senior High School. While Carlson does not directly participate in the more recent ongoing discussions (often rants) it’s clear he has fans and foes who go at it online, often name-calling, defending, insulting, bragging, etc.

If Mitch Carlson is not Umbrella Man, why hasn’t someone come forward to defend him? Presumably someone knows where he was on the day in question. Are there other suspects? If so, who are they? Was the warrant executed – that is, acted upon? If so, what were the results?
Why is Carlson unreachable? Is he being investigated? Multiple calls to Officer Christensen and the lieutenant allegedly in charge of this investigation go unanswered. With regard to the 2020 riots, at last check 37 individuals were facing felony charges, 43% of them from the Twin Cities with an average age of 27. Carlson was not among them. The protests around the murder of George Floyd were a perfect opportunity for right-wing extremists to infiltrate the crowd and sway public opinion against BLM and African Americans in general. Was it an attempt to discredit the BLM movement?
The powers that be should let us know.