Even if coordinated strikes don’t happen, this is historic (and at the last minute – they didn’t!) 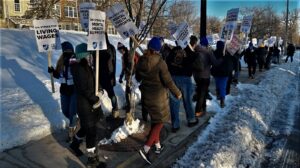 In a deliberately coordinated effort, MFT59 and MFT59-ESP, representing teachers and other professionals in the Minneapolis Public Schools (MPS) respectively, and SPFE (SPFT 28) representing both sections in St. Paul Public Schools (SPPS), filed “intent to strike” paperwork on Wednesday, Feb. 23. As I wrote in the original piece for March 7, we were then halfway through the 10-day (working days) “cooling off” period and the temperature appeared to be heading up, not down. An across-the-board walkout of teachers and Education Support Professionals (ESPs) in both cities could have started as soon as March 8.
At approximately 9 p.m. on Monday, March 7, both SPFE and SPPS announced that their negotiating teams had reached a tentative agreement (TA). At that point, almost literally at the last minute, SPFE called off the strike, and Joe Gothard, superintendent of schools, announced to parents and other workers that school would open as usual on Tuesday, March 8. Note that this does not mean the strike is canceled – yet. The school board must ratify the school’s (management’s) position, while a vote will be taken for SPFE member ratification. If both sides accept the negotiating teams’ TA, the strike is canceled.
Massive numbers of parents, students and supportive community members showed up at 7:30 a.m. on Tuesday, March 8, at the designated Minneapolis school picket sites, along with teachers and ESPs. Cafeteria workers and bus drivers will be voting soon whether to strike for their own demands. Meanwhile, the school system is committing to a pickup breakfast and lunch service for students, so presumably cafeteria members are hard at work to supply that. There is a lot more pressure on the management side than on the union side in this strike, another historic anomaly.
In our original piece from March 7, we noted: 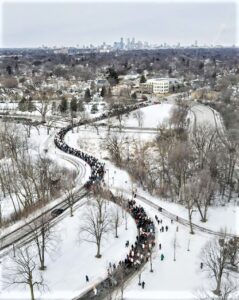 Drone image of the Teachers’ March setting out from the Wabun Picnic Area on Feb. 12

“Although there are historical, cultural, and other differences between the workforces of the two school systems … there is also a lot of overlap in their demands. This is why the educators’ unions from the two cities are working as much as possible on the same timeline.(However, with or without a strike preceding it, it is likely that the agreements eventually reached will not happen at the same time.)”
The coordination and synergy between the two cities’ unions does not stop just because St. Paul will probably settle and not strike. If the SPFE ratifies the TA, which they will only do if it substantially meets their key demands, this will only increase the pressure on MPS to up their offers and reach an agreement. MFT spokespeople claimed that MPS seemed to not even want to avert the strike. Perhaps they were “bargaining” on the public following the usual playbook and blaming the teachers for everything. It looks like we’re done with that nonsense.

On Saturday, Feb. 12, the two unions, Minneapolis dressed in bright blue, and St. Paul in bright red, held a joint mega-rally in sub-zero windchills. A couple thousand turned out for “purple power” – the effect of combining the strength of educators in two twinned cities at a time of extraordinary need, not only due to COVID, but also other forces that are pushing public education everywhere into a “race to the bottom.”
The MFT vote occurred at scattered sites on different days over a period of about a week, with results coming in the morning of Feb. 17. The SPFE vote occurred all in one day just after voting in Minneapolis closed. When the MFT results came in, union experts were astounded: the teacher chapter had a 96% turnout with 97% voting Yes, while the ESP chapter had a 93% turnout with 98% voting Yes. This is effectively unanimous. SPFE’s figures were not quite so overpowering, but still a clear indication of very high support, with the turnout and Yes votes both approaching 80%. 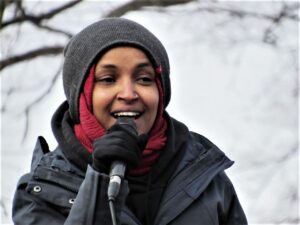 The view from St. Paul

SPFE has had several Yes strike votes in the past decade, and in fact did go out for three days in early March of 2020. They were able to win wage increases and other workplace improvement demands from SPSS through these actions. But for some reason, the administration of this system thought that the time was ripe to claw back some goodies from the union, so they hired a notorious union-busting consultant firm and came to the 2022 bargaining session demanding givebacks on several key existing contract points.
One of the arguments the school system made is so insulting and disrespectful that it counts as bad faith bargaining right out of the box, in my opinion. They attempted to claw back something called “weighted caseloads” that allows for adjusting the maximum student-to-special ed professional ratio based on the severity of the needs of the individual students. In other words, for instance, 500 high-needs students would be equivalent to 1000 students with just average needs. Bargainers for SPPS said that ESPs would “inflate” the needs of their students so they wouldn’t have to work as hard.
Another clawback the SPSS bargaining team is going for is to remove the ability of a worker to waive their insurance coverage if their spouse is in the same system and covered by the same insurance as a family.
On a webinar titled “Why We Strike” hosted by the Education Justice Working Group, a subgroup of the Labor Branch of Twin Cities Democratic Socialists of America, SPFE’s spokesperson Jeffrey Garcia said that Minnesota is becoming known as the epicenter of a kind of corporate raider mentality about schools.Decisions about things such as what is a rational (or indeed even possible) caseload of special ed students are made by financial professionals rather than education professionals. When the outcomes are terrible, students and teachers and especially ESPs are admonished that it’s their fault because they’re not working hard enough.

The view from Minneapolis 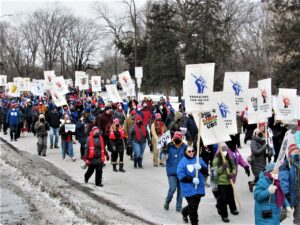 In contrast to SPFE, MFT59 has not even threatened to strike for decades, and last held a strike in 1970, when it wasn’t even legal. The contract has not kept up with the changing needs of educators, and the COVID pandemic accelerated this problem to a breaking point. In a recent article in the Minneapolis StarTribune, MFT59 teacher division president Greta Callahan noted that the two groups, teachers and ESPs, have come together to demand that ESP starting salaries are raised from the frankly insulting $24,000 per year to $35,000 per year, and that salary scales for teachers be raised to compete with surrounding school districts.
Callahan noted that the system has lost a staggering 650 teachers in the past year and a half, including 120 teachers of color. It’s hard to see how they have any ESPs left at all. For instance, an ESP making $24,000 per year pays exactly the same health insurance premiums and has the same deductible as a system administrator making $400,000 per year. And many ESPs have second or third jobs just to stay afloat, or, if their circumstances preclude that, they are often housing and food insecure.
Building up and retaining educators of color is another key point in the negotiations for a new contract. MPS claims it’s one of their highest priorities. But sensible proposals such as exempting teachers of color from layoffs are met with specious objections, such as the fear they would face a lawsuit if they did that. One wonders – who do they think would sue them? White teachers who put it all on the line this year to demand that exemption? You see what I mean? It’s insulting, gaslighting, and ultimately destructive. 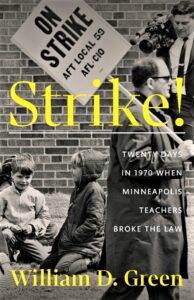 Speaking of the last time MFT members struck, there is quite a tale hanging thereby. And who is better suited to write that tale than a person who once sat on the Minneapolis school board, stepped in to rescue the school system as superintendent for four years when it had a leadership crisis, and was a professor of history at Augsburg College both before and after his stint as MPS superintendent? That very person, Dr. William (Bill) Green, has done just that.
In an interview with Em Cassel of the online paper Racket, Dr. Green talks about why he had to write this story. For one thing, there is a dearth of other writing about it. For another, it started with him just talking to friends who had been teachers at MPS at the time of the strike, and his surprise that a 20-day strike, ultimately successful, in which no one died, bled or starved, could be so terribly traumatic. He noted that veterans of that strike had the look of veterans of wars when they spoke about it.
Of course the thing about it is, it was actually illegal at the time. The striking MFT members lost friends who were with the less militant teachers union that also existed and did not join the strike. They also risked immediate loss of their job and retirement benefits, and the social death of disapproval for their radical, illegal action. The state of Minnesota had passed a law in the 1950s outlawing all strikes by unionized public employees. 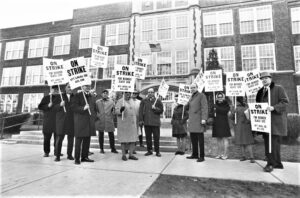 Asked if the strikers got their demands in the end, Dr. Green revealed the third reason he had to write this book:
“They did, and here’s the thing that makes that strike historic, in my opinion: They changed the law of the state. … And in a sense, that was much more important than the other issues they were bargaining for. The law that was changed basically placed the state on the side of labor in a way that it hadn’t been in the past, whereas before, the state was anti-labor because it kept labor from staking a position and being viewed as equals, as people. There was an incremental improvement over the quality of life – and that’s one of the reasons you haven’t seen strikes. … When these people, who had invested decades of their lives to an institution and had accrued reasonable retirement funds, benefits, and things of that nature – when they threw it all out to pick up a placard and go to the streets to fight for something like the change of a law, that, to me, means you’re talking about a lot of heroes here. Ordinary people acted heroically. That’s what the story, for me, is about.”
The book is titled “Strike! Twenty Days in 1970 When Minneapolis Teachers Broke the Law.” It is published by the University of Minnesota Press and is available to pre-order now. You can pre-order for shipment from Amazon or from your favorite local indie bookstore using bookshop.org.

More information or get involved

Check any of the following Facebook pages for information: MFT 59, St. Paul Federation of Educators, Education Justice MN. In addition to your choice of daily news media, check out the online paper Workday Minnesota at workdayminnesota.org. You can contribute to the Minneapolis strike fund atwww.mft59.org/strike-fund.