“Raise Your Voice, Silica Dust & Molten Iron” first appeared in the March 2022 edition of the alley community newspaper. It is reprinted here by permission. 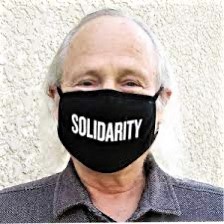 Upon retiring from Smith Foundry, this writer undertook distribution of the Alley to the various agencies and businesses of the Phillips Community and surrounding neighborhoods. In the realm of said distribution, a sometimes annoying competition for space exists with our friends from Southside Pride.
However, of greater concern is Tony Bouza’s column in the February issue of that paper, “How to get rich.” “Capitalism is very cruel,” writes Bouza, “its only saving grace is that it accords with human nature… My reaction to such cruelty? Bravo!… Altruism doesn’t work … is this so complex?
“Look around you, for God’s sake. I didn’t invent it and I’d much rather socialism worked.” He appears even to slight Jesus for manifesting communistic proclivities! And then, “Stop kidding yourself… if you are so smart, why aren’t you rich?”
Is the man being facetious? Golly, in my case I worked long arduous overtime hours for many years to barely cover a mortgage payment. Truthfully, most of us lack the funds and the necessary time needed to invest wisely in stock purchases. You will allow me then to push back philosophically on behalf of us “masses.”
Actually, the belief that only capitalism works in accordance with “human nature” is flawed in several ways: 1) It is an ahistorical assumption. 2) It’s metaphysical (i.e., it fails to see the big picture). 3) It reflects a narrow empiricism. 4) It fails to take the long view.
A historical assumption? In fact, for the greater part of human existence (the hunter-gatherer phase) a matriarchal order prevailed in the village. Said order was a reflection of maternalistic altruism. Hey, if a man killed a buffalo, he fully intended to share it.
Metaphysical? Success or failure occurs within a context. The first socialist county sacrificed 26 million people and a third of its productive infrastructure in the war against fascism. Factor that in, please.
Narrow empiricism? The eye sees merely the outward appearance of things, but fails to see the inner essence, i.e., fails to recognize the struggle of opposing forces beneath the surface. In other words, Tony, altruism and egoism are interpenetrating aspects of human nature which relatively manifest in conjunction with social existence.
The long view? Some 40-plus years ago a co-worker asked how things would be better under socialism. I explained that public ownership of the means of production would inspire labor for the sake of the whole nation. Socialism will render us free men and women, and the bosses will then be employed by us! Hey Tony, how much longer?

Post Published: 01 March 2022
Posted by: the alley
Found in section: Raise Your Voice