They pulled the bikesters’ exclusionary proposal 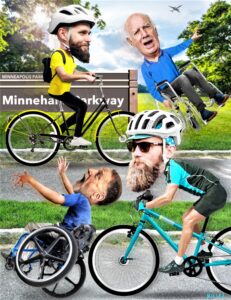 The Park Board was scheduled to vote on whether to close Minnehaha Parkway to cars at their June 15 meeting, but at the last minute they decided, due to the large volume of emails in opposition, to pull that item from the agenda. It is scheduled to come back before the board on July 6.
Typical of the kind of opposition that the plan had was this letter from the DFL Senior Caucus:
“There is, once again, a proposal in front of the Park Board to close some Minneapolis parkways to vehicular traffic on certain days every month. The changes would alter the nature and use of parkways across Minneapolis from vehicle-centric use to so-called active human use.
“’Human use?’ Who do they think are driving the cars? The intent of the parkway system is to act as a connection between natural elements that are public parks. The proposed change to close off sections of parkways is a step toward the desire to transition parkways solely to bicycles, or other non-motorized, wheeled conveyances. This is discriminatory towards both seniors and the disabled.
“The Minneapolis Area DFL Senior Caucus strongly opposes the very idea that Minneapolis parks deny access to any person on any given day.”