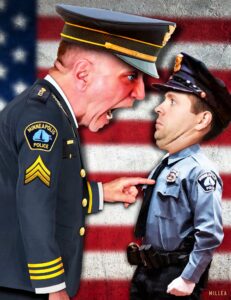 I am a former recruit to the Minneapolis Police Academy. My family and friends did not want me to work for Minneapolis and I was skeptical. The MPD is internationally known for being a terrible department. After meeting with Chief Arradondo, I was convinced that the community needed me. I thought the old department was going to be revamped into a Minneapolis 2.0.
I grew up in the suburbs and lived my young adult life near the U of M. My friends and family say that I am too nice to be a police officer, but after spending countless hours volunteering with the St. Paul Police Department, I knew a good officer is one who keeps their cool and is a nice person. I have met some of the most decorated officers in their communities, and I knew how I wanted to police the community.
Among my fellow recruits, I was one of the oldest, and few were old enough to have children. Many who graduate from the Academy are barely 22 years old. I have two young children, and the pressures of trying to perform adequately meant that I was stretched thin as a family man, and ultimately this made me realize that if I continued working for the department, I would lose out on raising my children.
The officers training us were generally good, but the direction we were heading was more militaristic than the community orientation that the department advertises. The Academy lacked a lot of the community element and trained us instead as if we were on the SWAT team, delving into the basics of searching buildings, traffic stops, and what to do if we were in an active shooting situation. The heavy emphasis on just these subjects, one could argue, does not make a well-rounded officer. Spending hours conditioning recruits to fear their constituents breeds officers who could cause misconduct.
The department is so short-staffed that one hand really does not know what the other hand is doing. I was told by one group of supervisors that I was doing great, while another group of supervisors made my time there very hostile, to the point I had to carry around a resignation letter. I could feel their dislike of me and knew from the beginning that they despised me. It was a shame that one day I could be praised for my performance, and another day they made me feel like I was complete trash. How is that even allowed in any workplace?
One of my role models since the second grade was a St. Louis Park police officer. He came into the room of second graders and said, “How many people do you think I have shot?” An odd question, right? The kids yelled out numbers ranging from one to 25. The officer said, “Zero, I have never had to shoot anyone.” This has always stuck with me as how a police officer is supposed to do their job. However, coming to Minneapolis, I was being trained by officers who had been involved in deadly force situations. One officer had allegedly shot and killed two people, but he was still training us despite protests from the community. Some of the officers training us were recently on TV for incidents of misconduct, yet they were still training us. This was very disappointing for me. How could I prove to the naysayers that the department was doing what it could to change while it was allowing these officers to train us?