At first, I welcomed blogging, but now I am pretty well convinced if life is better, it isn’t due to social media as practiced.
A friend sent a link from Next- door asking about “very loud noises.” By the time I opened the posting, replies had already identified it as military aircraft doing acrobatics. On my neighbor’s post, I wrote, “A busy urban airport is no place for an airshow.” Almost immediately, six people wrote that it was my own fault I was annoyed – for moving near the airport. (60 years ago?) Also, five people thanked me, and were soon told they were wrong.
Misrepresenting sources and facts is commonplace when the topic is airport noise. The original goals of the South Metro Airport Action Council (SMAAC) were to protect the affected population against excessive noise and pollution from commercial aviation operations, particularly the impact of increased air travel using jet aircraft. They worked at it then, and we still do, including the issue of greenhouse gases. 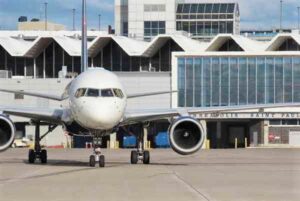 However, commercial aviation operations are comprehensively regulated by the federal government, with little regard for the land uses adjacent to airports. Airport sites are selected, and usually owned and operated, by local governments, primarily to meet planned economic goals. As populations and economies grew, airports more often were managed regionally, by port authorities, counties, or state commissions. Locating airports has no body of law or precedent regarding overflights, as SMAAC discovered in losing its 1970 lawsuit. If noise and pollution are to be limited, the airport sponsor has to negotiate with the FAA. Fearing economic growth limitations, St. Paul (and other cities as they developed) demanded consideration and got it from the state legislature.
Just like most people, I enjoy conversation – it implies responses and a kind of wonder about how differently people view life as it passes by. In a casual conversation, the possibility of disagreement is alerted by a raised eyebrow or a need to move on. But on Nextdoor, there are unfounded disagreements.
Digital editions of published newspapers or magazines retain journalistic standards. Limitedtopic websites are moderated and have rules. There are thousands of websites publishing documents that are useful and get attention. But some sites are simply gossip or used for scams and misinformation.
Nicholas Carr, author of “The Shallows: What the Internet Is Doing to Our Brains,” observed that when we are online “attention splinters, thinking becomes superficial, and memory suffers. We become less reflective and more impulsive. Far from enhancing human intelligence … the internet degrades it.”
What has changed at MSP are routes and schedules. Attempts to regulate overflight noise by municipalities through zoning rarely succeeds fully as part of the contract between the FAA and the airport sponsor. Defining the likely harms of aviation noise exposure lacked data and experiments in civilian life before 1960.
As a result of the state legislature’s 1996 intervention, the long-term plan for annual passenger capacity – begun in the 1980s – was presumptive and impractical when construction of the new runway (17-35) was started in 1999. Assumptions and economic forecasts were for sustained growth, but 9/11, the recession of 2008, and COVID-19 interrupted.
Transportation underlies expansion: trails became roads; riverside camps evolved as ports; roads led to fords and bridges, etc. Local population, development, and commerce associated the costs and compatible land use with the airport more than with air traffic. The airlines and the FAA came when invited and dealing with the noise and pollution was, and is, local.
Transportation noise is proportional to energy, therefore to air pollution; transportation poses safety risks as well. Regulating the transportation sector requires, in these and other cases, unusual jurisdictional and enforcement issues. MSP operations are complicated by its role as a major hub. With its unusual runway configuration, if the parallel runways are in use, the new runway is used for either departures or arrivals. This requires “flow changes” that limit daily scheduled use. Schedules are set by FAA for en route timing and runway clearances.
Here, several hundred million dollars had already been spent to sound-insulate buildings before the program fell off the rails in 2000. It remains, as a remnant of little public value, under a settlement agreement that whitewashes disagreements about eligibility, fairness and need. It is well past time for the cities of Eagan, Minneapolis and Richfield to reject the illegitimate intrusion of airlines and other cities through the MSP Noise Oversight Committee.

Jim Spensley is the president of the South Metro Airport Action Council.